As part of Paddy’s work on 1914FACES2014 he has recently been in action in Queen’s (College of Humanities) making fabric-based pieces which will form part of the exhibition Faces of Conflict at the RAMM in 2015. 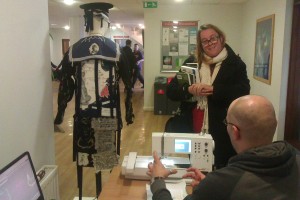 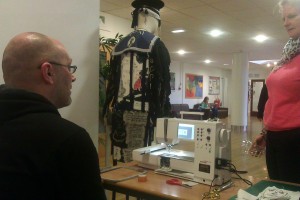 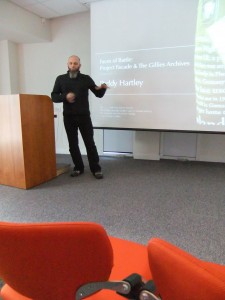 In this joint event with Art History and Visual Culture at the University of Exeter, Paddy Hartley spoke about his earlier work on the Wellcome-funded Project Façade and the resulting exhibition at the National Army museum in 2007-8. The residency Paddy undertook then gave rise to a range of striking uniform sculptures which feature period military uniforms as a surface upon which to tell the stories of servicemen.

The sculptures, which were displayed at the National Army Museum for ten months, celebrate the pioneering surgical techniques of the New Zealand surgeon Sir Harold Gillies – many of which form the basis of plastic surgery techniques used today. Paddy spoke about the place of Project Façade in his career trajectory, and the concern with the face which characterises both his artistic enquiry and his work in fashion design. He spoke to about his upcoming residency at the University of Exeter within the FACES project and his desire to revisit the stories of WWI servicemen from the south west and to find new forms to accommodate those stories.