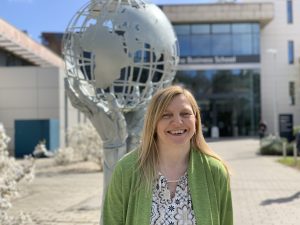 Are there any particular barriers that were overcome to embed apprentices within your team?

I think mindsets. Initially, academic staff might ask ‘will an apprentice be able to handle this work?’ ‘Is there anyone else that can help me?’ Similarly, certain members of my team that have been with us for a while have been unsure whether to pass work to the apprentices, but this was overcome by gaining their trust, ensuring that they understood that people were being supported in their role as an apprentice. So anything the apprentice did not understand, they had people that could help them and back them up.

We don’t ask an apprentice to do something we don’t think they are capable of doing.

How have you engaged with and embedded apprentices within your team?

Straight away they are included in all the things that we do with any other team member, team lunches, team events and trips out. Ensuring the apprentice engages in our team training programme, that we use for everyone, including local induction and procedures. Apprentices get treated the same as everyone else, and it helps that they feel they have their own processes and procedures in place.

The apprentice takes on their own specific tasks so unless they have a problem, I have little involvement. That hopefully gives them a feeling of ownership over what they are doing. It helps to have a more senior apprentice in the office, they get on very well together and one acts as a sort of workplace mentor to the other.

It’s really good if I get someone saying ‘I’ve got this job and I don’t know if anyone else in your team can help do it’, we find out what the job is and think ‘yes, our apprentice can handle that’. This is brilliant as it means the apprentice is dealing directly with academic staff.

Our apprentices have been very good at asking the team for advice. if they can see I am busy, they will ask others in the team for support and advice.

Can you tell me a bit about the recruitment process and the quality of the applicants?

We have had some tricky recruitment in the past. To find the last apprentice we had to go out for advert 3 times. I’m not sure if it’s something to do with the degree apprenticeship and people who have got A levels that are applying for these instead of admin roles. We certainly used to get a lot of candidates with A levels and degrees applying, but those people didn’t seem to apply last year. I’m not saying there were people who were less capable or good candidates, but there were less of them. Some of the issues may have been that we were looking at the wrong time of the year, and in one of our interviews the candidates withdrew. 3rd time lucky though, we had some good candidates to choose from.

In our 3rd round of recruitment, we used a lot of social media which we had never done before, and I feel that probably paid off, so it taught us a lot as well. We also updated the advert with some wording from HR, promoting the role and the potential for progression. It was quite a learning curve actually, making it relevant to people and removing ‘business speak’.

What are your experiences of managing apprentices?

One of the benefits of having an apprentice in the team is that it shakes things up. Bringing in somebody with completely new ideas and perspectives, sometimes from another industry or even straight from school helps to invigorate the team. ‘Shaking the team up’ is the only way I can put it, it just keeps everything fresh and you notice that apprentices when they have been here for a while, they start to say ‘oh I’ve done that twice now and I’ve got some ideas on how we can change how we do that’, so we ask them to write a process. But it’s all coming from them which is great and I think all those things help the team as a whole to improve what we do.

Are there any examples of the positive impact your apprentices have had on your team?

We’ve got residential that happens twice a year and it’s quite a big job, and we had a process in place but it had never been written out properly because there had never been the time.

The Apprentice took it on as soon as she started her apprenticeship. She developed a process for it and has got it to a point now where she has a group of suppliers to use, she is dealing with the same academics so she knows what they want, and when she hands it over to the new Apprentice, it’s all there – ‘these are the suppliers, these are the cost codes, this is what we use and the accommodation we normally contact’, all that information is now ready to go, whereas before it used to be in folders from past events, but nothing had been written down as a process. So that was a really big thing for us.

There are 2 ex-apprentices in the team at the moment. One of whom was our first ever apprentice, who left and worked elsewhere in the business school, then came back again. So there are 4 people in our office who started as an apprentice. The fact we have past apprentices in our team is nice as it shows our new apprentices that there is progression at the University and within our team.

As far as making life easier, and retention within our team, our apprentices feel that they have that support and backup because it’s quite a busy environment and you are constantly interrupted, so if it was just your work to do that would be great, but it’s not how it works and we all know that.

How do you manage your apprentices off the job training time and does that have any impact on their role?

It’s quite good actually, just as one apprentice stopped doing her day a week, the new apprentice started, so we didn’t have 2 people out of the office at the same time. You just get into the habit of knowing they are out of the office one day a week. Sometimes there are other things they get involved with as apprentices, such as National Apprenticeship Week, which I thoroughly support. It’s just a case of the apprentices letting me know what’s happening, and when, and giving me a heads up that something is coming up. We have a shared calendar, so everyone in the team knows what each other are doing, and where they are at any time.

Sometimes the apprentices have an exam or a project that needs a bit more work, so I’m happy to schedule in some time for them to be able to meet their deadlines. What’s good for me is that they communicate what’s going on. I’ve had people who have struggled with their coursework, for various different reasons and at various points in the year, and I’m quite happy to give the apprentice some time to get their college work done. As long as they get it done, and use that time wisely, then that’s brilliant as it takes the stress off them, and it enables them to concentrate on their work whilst they are in the office.

Have there been any examples of work or projects your apprentices had to do where you needed to allocate them a job?

One of my apprentices asked me about being able to do a change project. I could think of some projects, but I couldn’t think of anything that was interesting enough (for an apprenticeship project), so I asked my line manager. He then said there might be something he could come up with that would be of benefit to the school. This is hugely beneficial to the apprentice as it directly links their college learning with their work life. I don’t like the idea of making up a project for the sake of it because there’s not enough work involved and it’s not interesting enough and therefore the apprentice won’t learn anything.

How do you support your apprentices in the workplace?

We’ve got things like T1 and other systems we use. I’ve developed a tick box based form which I give people at induction and explain that this is what they need to cover over time. When we have 1:1s I use this to generate conversation. The form has things like “shadowing” and “induction of academic staff” is a big one. There is quite a lot involved and we are always being asked about our inductions and reviewing it, and it’s a big process and a big part of our team. On the form, it’s just a tick box, but the process itself is complex and there is a lot to it, so they start by shadowing 3 or 4 different people in the team inducting academic staff, and then they get involved in different ways in parts of the process, making appointments with line mangers and different teams, and then eventually coming to the point where they are asked to have a go at doing an induction themselves. We sit with them if they want or if they feel confident they can do it on their own. That takes around 6 months, so it’s not a quick thing.

We use Student Record Systems (SRS) and timetabling software. Everything we do is in support of academic staff, so its things we get involved in such as marking, we run it through a programme and get it marked, liaise with student services, liaise with academics. There’s quite a lot to that and it’s also learning how the system works, so it’s not straight forward. I suppose with apprentices, depending on what level of experience they have got, a lot of it is the communication and understanding when to do something, when to hold back and when to disturb an academic, whether email or telephone is the best way of communicating with them.

A lot of what we do crosses over, and it’s all about teamwork, liaison, so we have a lot of processes, and it’s getting to understand what we do. From the mentoring side, it’s trying to work out whether the apprentice is ready to do certain things.

Anything you would say to managers considering getting an apprentice?

The advice I would give other managers is, don’t overthink it! Apprentices are staff like any other staff, they might have less experience and there may be specific things they don’t understand, but what you are dealing with is a person and a new person coming in anywhere is the same – it’s not that much different.

Having an apprentice in your team is fun and rewarding, hard work at times, but definitely worth it. I get a real kick out of getting somebody in and seeing them develop and seeing them get better and more confident. That gives me a huge sense of achievement, and I would do it again.