A new craze is sweeping through the maths department and other disciplines: Gather Town.

I say new; we first inspected the software back in October, as a potential alternative to the somewhat nauseating (but impressive and useful) Mozilla Hubs, a 3D multi-user virtual space. Gather, instead, is 2D. In fact, it looks a lot like a noughties RPG. It feels like you’re wandering around in an old Pokémon game on Nintendo DS. But instead of bumping into a wild Pikachu, you might encounter a wild lecturer.

In these virtual spaces – digital representations of buildings or rooms that you can build and edit yourself – users join as avatars and are free to move around, having conversations in pairs, small groups, or larger groups, based on the proximity-based audio features. You only hear and see those around you, the latter via a small webcam display that appears at the top of your screen. 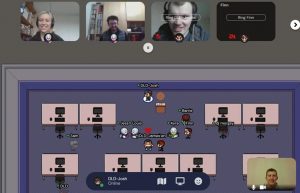 Sounds fun, right? It is. But it’s also incredibly useful as a teaching and community-building tool. Since private areas can be created, allowing conversations and camera-sharing between a limited number of people, Gather can be used to run office hours, drop-in help sessions for modules, and much more. Collaborative resources, such as whiteboards and shared documents, can be placed on walls or tables and accessed by multiple users simultaneously. You could even create a full classroom and have the lecturer broadcast their screen from the plinth at the front. There really are so many possibilities for using this versatile software. It’s also easy to use and, well, gather in – requiring just the sharing of a link and a couple of clicks. It’s a wonderful piece of kit to get people together and communicating in these times of remote learning. 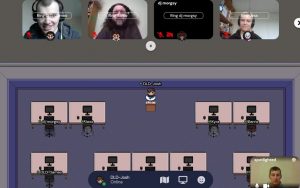 As DLDs, we’ve been running the peer mentoring sessions in Gather. We also had a CEMPS DLD quiz night in December using it, where the host used the broadcast-to-room function to read questions and each team assembled around a table and used document sharing to fill out the answers. It worked amazingly well.

I don’t want to paint the picture it’s all rosy here though. We have challenges. One of the main ones being participation levels. In peer mentoring, the numbers of mentees per session has been low for the last few weeks. We nudge students via email, reminding them it’s an opportunity to talk to actual (virtual) people, but many still don’t come. The reality is that virtual spaces have an impossible task in replacing in-person meet-ups. Plus, with lectures and seminars on Teams and Zoom, extra sessions in virtual spaces increases already high levels of screen time. This is being seen around the country, and indeed the world, in educational institutes at all stages. It’s one of the reasons we have to be flexible. To use peer mentoring as the example again, this term we decided to run it as a ‘drop-in’, rather than last term’s hour-long sessions, so that students seeking support don’t have to commit to staying for a full hour. Instead, they can pop into the virtual space, get the help they need, and jump straight back out. Sessions remain quiet for now but, as the ever-enthusiastic, wonderful mentors suggest, as term progresses and exams and coursework deadlines near, hopefully sessions will start filling up with students, questions, and long lines of dancing avatars.