We are very proud that one of our Gardeners, Colin Brown, has shared his expert knowledge of bug hotels with the BBC which has been included in the BBC BITESIZE article “Four hacks to help our hibernating animal friends this autumn”. 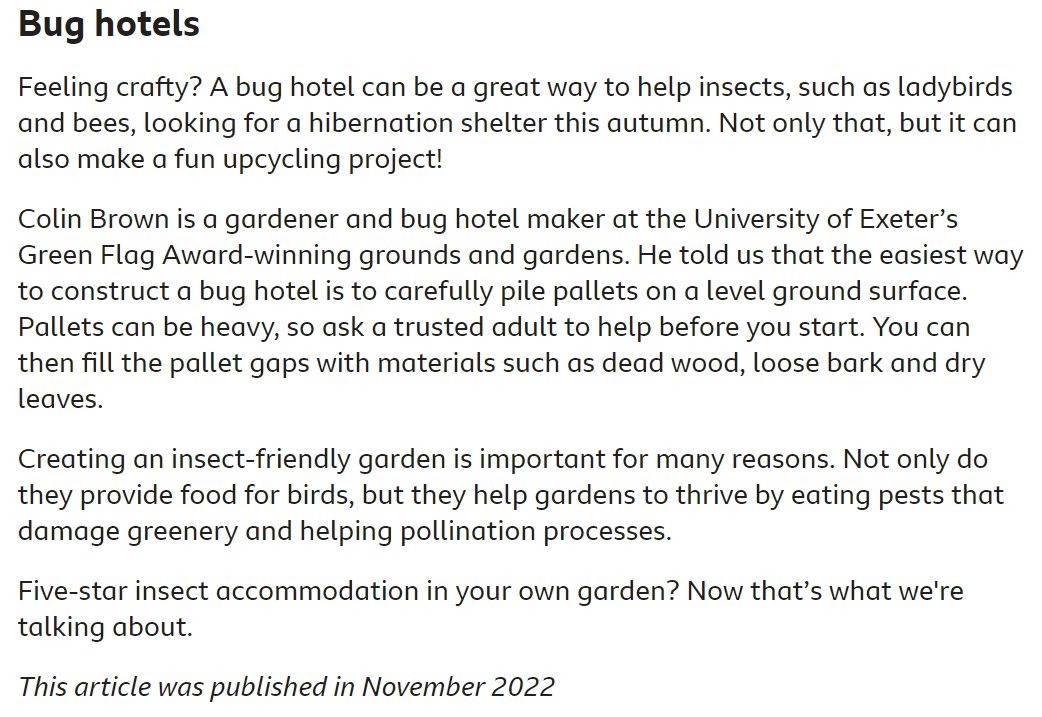 Full article can be read at http://bbc.co.uk/bitesize/articles/z4dq6rd 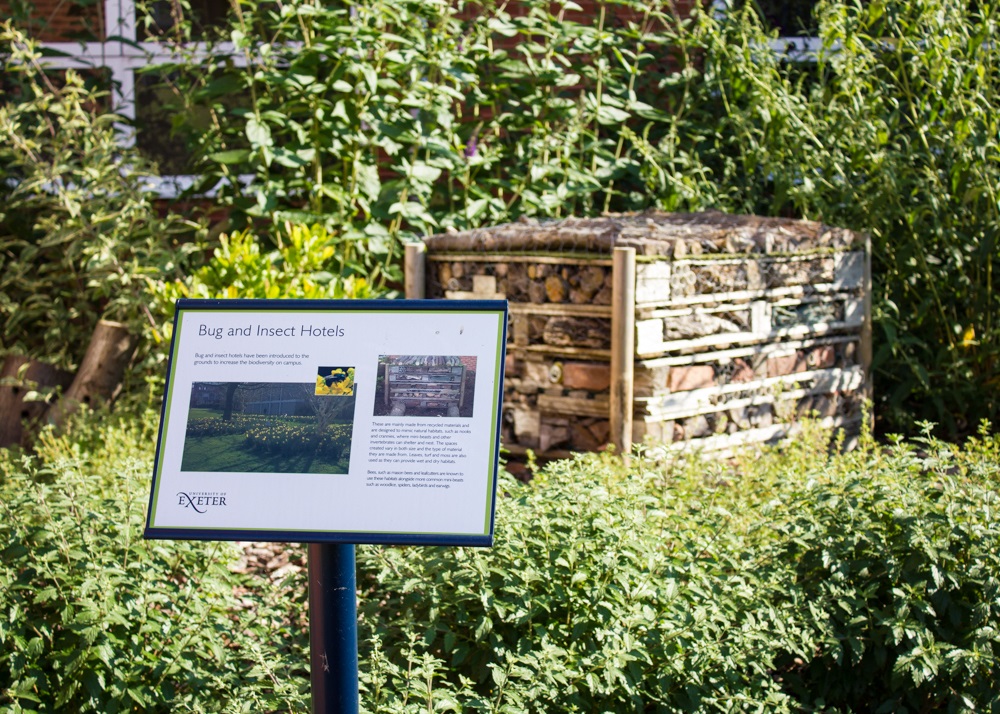 We love to create wood habitats on campus as they are essential for wildlife and provide food and shelter for countless tiny invertebrates.

The habitat piles in these photos are made from the dead branches of the trees they surround, so any fungi or minibeasts are still near their habitat.

So if you see log piles on our grounds, we haven’t forgotten to clear away debris following tree works …………………… we are doing our bit for nature and the environment! 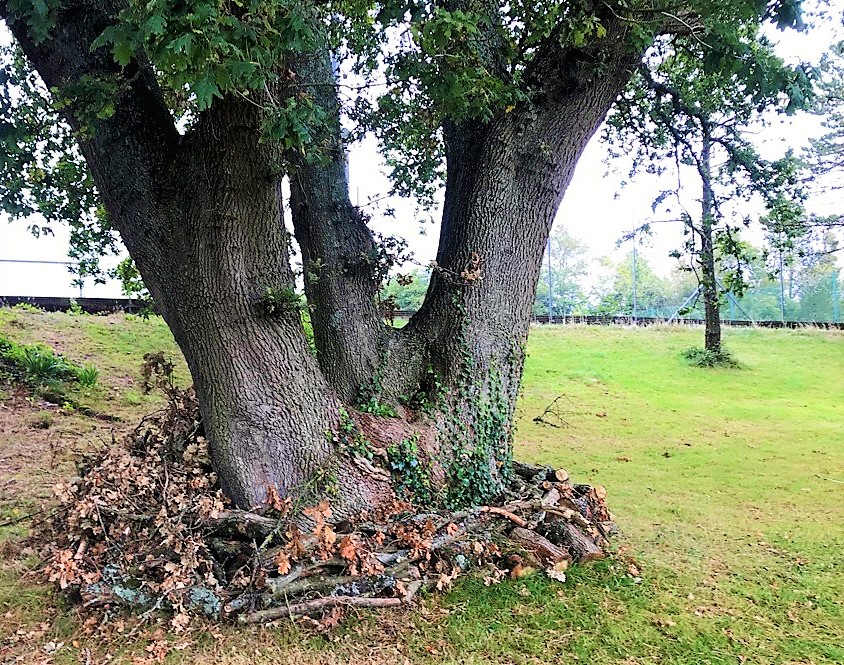 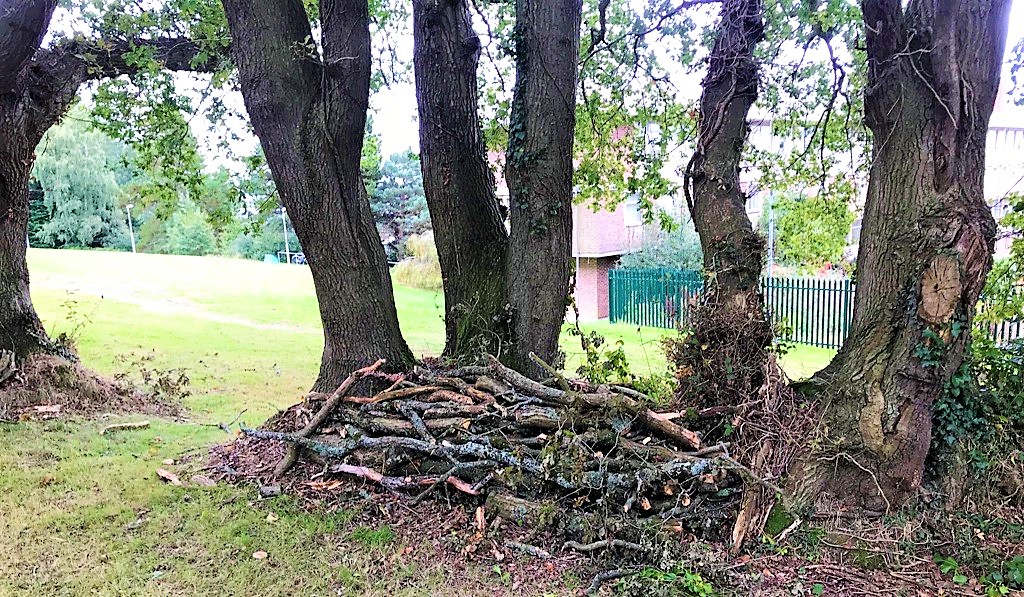 Ash Dieback (Hymenoscyphus fraxineus) is a fungal disease first recorded by the Forestry Commision in 2006 becoming prominent in the South East of England in 2012.

We have confirmations on Ash (Fraxinus excelsior) specimens within our University since 2018, as has been the case for other well monitored sites in Devon and Cornwall.

The infection is permanent with no control and, although mostly terminal, there is a high degree of variability with respect to the seriousness and speed of the symptoms. We are gifted with a high number of people exploring, enjoying and being amongst our grounds and any sign of symptom is considered with great caution so physical management of these trees today and in the future is a certainty.

The dilemma amongst the Grounds team is that we know how valuable Ash is to biodiversity as a habitat. It hosts Woodpeckers (Dendrocopos major), Tawny Owls (Strix aluco), Redstarts (Phoenicurus phoenicurus) and the team favourite the Nuthatch (Sitta europaea), all for nesting. The lichens and moss which grow freely are a food source for caterpillars.

We are able to balance these interests and find opportunity where people are safe, and friends of other species can continue to share the space together.

The solution we have employed, which you can see in the photo below, is to carry out a veteranisation process on a tree. The major limbs are completely removed until the crown has gone and there is only a trunk left standing. The tree is then ringbarked which involves removing the living tissue from around the trunk. With the xylem and phloem severing the plants’ ability to transport water and nutrients, the tree will die and decay and this breaking down process will become host to insect species.

Importantly as the trunk is short and wide with developed buttress roots, there is no expectation that this tree will fall.

The top of the trunk can now be coronet pruned. This describes a technique that aims to replicate the natural fracturing effect seen after a limb failure, where insect species can easily reside within and rainfall can sit and gather amongst the dead wood.

Trunk segmentations have been cut out, hollowed and an entrance point made. These have been re-attached to the trunk around all four compass points as a future bird nesting habitat.

For anyone that would like to visit this work its location can be found here – http://ex.ac.uk/veteran-ash-specimen

For the future, the best course of action is regularly monitoring the species we care for. After all a minority will also be genetically tolerant and that stock of trees amongst our collection will be vital for the long-term future of the woodlands and specimens here when we begin to repopulate.

Unfortunately a diseased Ash tree behind the IAIS Building on Streatham Campus has had to be removed, but our Arb Team were keen to use this as an opportunity to help wildlife and increase wildlife habitats on campus, in keeping with our biodiversity and sustainability work practices.

It is now a wildlife habitat high stump which will harbour and benefit insects and wildlife for years to come and the team have also carved bird boxes into the trunk.

The wildflower areas at St Luke’s Campus are looking fantastic.

The wildflowers at the Reed Hall beds are in flower and looking glorious.

Last year we trialled having wildflowers instead of the customary formal planting in these beds and they proved so popular with everyone and the bees, butterflies and insects that we’ve done it again!