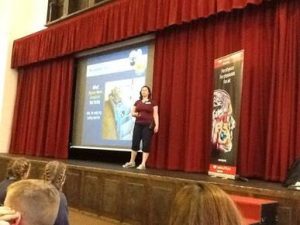 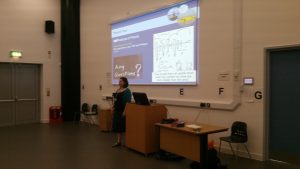 Soapbox Science is a public speaking event aimed at breaking down the gender stereotypes associated with a career in STEMM. It follows the format of Hyde Park’s Speakers’ Corner, showcasing the work of 12 women in science.

Scientists from all postgraduate study and career stages can apply. All successful applicants will be given the opportunity to undertake training in methods for communicating their research to the public in an inspiring way.

To apply to be a speaker, applicants just need to fill in a short form available here. The deadline for applications is Friday the 24th February 2017.

This year’s event will take place on Saturday the 24th June 2017,  1-4pm, in Exeter’s Princesshay Square.

For more information and our previous speakers’ experiences, you can watch our Soapbox Science video, visit our speaker’s blogs on the Soapbox Science website, or contact Exeter’s event organisers and . You can also get a taste of the event though our 2015 and 2016 event pictures.

Are you a Humanities or Social Science postgraduate research student in the GW4 University group?  Would you like the opportunity to present your research in an open, friendly and supportive environment? Then look no further than Breaking Boundaries 2017!

This conference aims to showcase doctoral research from the wide variety of disciplines encompassed by the humanities and social sciences.  It is student-led and provides an opportunity for postgraduate research students to present their current projects in a friendly and supportive setting.  We therefore encourage submissions which showcase research that is still in progress, particularly by early stage researchers who will benefit from feedback and discussion in an informal and multidisciplinary setting.

We are opening up invitations for abstract submissions to postgraduate research students in the humanities and social sciences from the GW4 Universities – Bath, Bristol, Exeter, and Cardiff.  This is for papers and poster presentations.  Both finalised and ongoing projects may be presented; all should be accessible to a wider audience. Papers should last no longer than 15 minutes, and posters can be up to A1 size (landscape or portrait).

This conference is free, and prizes will be awarded for the best papers and posters.

Thinking about applying for an RLI Award? Hear from two of last year’s recipients below about how RLI funding helped to support networking activities and provided opportunities for reflecting on and developing organisational skills!

The RLI award helped us to kick-start our peer network, to get us focussed on the issues that matter, and to modify the way we operated to make it more sustainable and more valuable for its members. I also learnt a number of personal lessons, such as my strengths (e.g., creativity) and weaknesses (e.g., reluctance to delegate). If I had my time over I would do things differently, but I’d definitely want to be supported by an RLI award again!

Don’t forget – get your application in before Friday 13th January at 5pm! For more information, please visit the Researcher Development website.

The Brilliant Club is a charity with the overarching aim of bridging the gap between under-represented school pupils and highly-selective universities. This is achieved by matching PhD researchers with schools where they deliver a research programme to small seminar groups, culminating in the students completing a final assignment and being awarded with university-style grades at a graduation event. I was working as a Brilliant Club Tutor during Autumn Term 2016.

Why did I apply to become a Brilliant Club tutor?

I came from a low participation school and felt that when making decisions about university, the knowledge or support network I needed was not available. A teacher once told me that highly-selective universities were out of reach for people at my school. I applied to The Brilliant Club to try and make a difference. I wanted to use my knowledge and expertise to intrigue and inspire a generation of students, giving them the opportunity and confidence to not be held back in achieving their potential.

The process of delivering The Scholars Programme is well-supported by a dedicated Programme Officer and support team at The Brilliant Club. The programme is flexible to suit your personal and research needs, starting with a dedicated training weekend, during which you are provided with knowledge and teaching skills.

You first meet your pupils at a University Launch Trip. For me, this was at Exeter, where the pupils got a tour of a campus, were able to ask questions and I delivered their first tutorial. As my placement was in the Autumn, I was given a pre-designed Biology course to teach: ‘Is Ebola the Next International Pandemic?’. For subsequent terms you can design your own course based on your research. My course for next term is called: ‘From Fossil Fuels to Fish: Where Environmental Chemistry meets Marine Biology’.

Tutorials take place in schools with pupils in groups of 6. In total, the programme consists of 6 seminar-style tutorials, the final one being for feedback. After each, you set the pupils’ homework to aid their understanding of the subject and research skills. After tutorial 5, the pupils are set a final assignment, of 1500 words, where they answer a focussed question based on what you have taught them. This is graded in university-style and pupils are invited to attend a graduation event at another UK University.

What I Found Rewarding

Performing a placement with The Brilliant Club has been rewarding on many levels. The pupils are engaging and keen and I learned a lot from them. This experience has given me an awareness of how to engage non-specialist audiences in research that may initially seem intellectually challenging. I have perhaps never felt greater achievement than when a group of 12 students were begging me to replace their Science teacher. Furthermore, I was astonished by the quality of final assignments they produced. I got great satisfaction from groups of 12/13 years olds submitting final assignments, having used biomedical journals as sources, correctly referenced in Harvard style.

Author: Cameron Hird is a PhD Researcher in Biological Sciences at the University of Exeter. You can find out more about Cameron and his research here.