Aimee Middlemiss is embarking on an ESRC funded PhD in Sociology and Anthropology entitled ‘Contested Personhood in Second Trimester Pregnancy Loss in Britain.’ In this blog post Aimee shares her experience of returning to academy after being out in the world as a BBC Radio 4 producer, a Truro College Anthropology teacher, and a mother. That last one is ongoing…

It’s twenty years since I first left academic life and set out into the world. A brave new world in which Labour had just won its first general election for years. A world in which dial up internet was chirpily starting to link people’s homes. A world in which salaries rose every year, and where paid temping was a good way into the BBC, and London rents could be afforded by a couple of university graduates who weren’t picky about a mouldy bathroom wall and the odd bit of rodent activity. A time, in retrospect, of brightness and hope for the future.

For me, the move out of the academy was a step into that brightness and hope. Studying Social Anthropology at Cambridge at the same time as my parents’ divorce, I had spiralled into a bleakness which still colours my memories of undergraduate days. At home, everything had fallen apart and anarchy ruled. At university, the big fish from a state school was uncertain and minnow-like, afraid of having her head snapped off by a fearsome academic, trying to swim fast enough to keep up with the other faster, sleeker fish who seemed to be from some altogether other school. 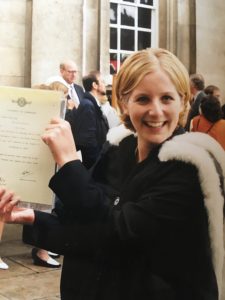 And then the subject matter. Anthropology as a route to nervous breakdown. How to live, when others live so differently? How to build your own morality, when you know morality to be contingent? How to know what is real, when everyone claims something different, and they are probably all right? How to have the right to speak about anything, ever, as a young woman of privilege who knows nothing at all? Hovering in the shallows, the difficult questions threatened to pull me into the depths.

Easier by far to leave, skipping into that hopeful world outside the university where the music was loud, and the city lights bright, and the chances were things could only get better. 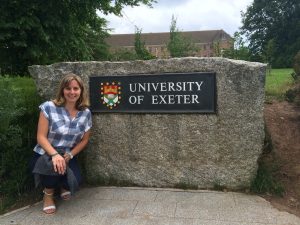 Aimee in Exeter when receiving her PhD offer

And yet I’m back. Two decades on, I just spent a year completing a Master’s in Science and Technology Studies, and now I’m starting my PhD in Sociology and Anthropology. Drawn back in by the very uncertainties and big questions which pushed me out, my work has themes of boundary disruption, life and death, kinship and embodiment, meaning, uncertainty, change and power. It turned out that the bright world outside was made up of that stuff too, it wasn’t just in academia that the waves kept on breaking. But out there, in the bright world, you can feel you are hovering just on the edge of something bigger which needs time, and space, and the like-minded shoal around you to go a bit further to see what is there. And then, coming back in, it seems those big academic questions from twenty years ago are still there too, in the university, about representation, reality, partiality, and situatedness. Really, one of those swifter fishes might have resolved things, while I was away.

But this time into the academy, there is a change. Something has grown, in the interval, in me. Over those two decades, and two careers, a husband, children, a life built in places where I don’t come from but can still belong, something has taken root. I am grounded now in the adult world, and despite knowing its contingent, constructed nature, there is freedom there. I don’t need to resolve everything, I can live with uncertainty and partial knowledge. Middle age has brought perspective. I know what I want to do, and I have some plans for how to do it. I know now things may not get better, and I am, as are we all, on borrowed time, but instead of despair and a retreat from the deep, the hope is to have a quick dive down before that time runs out…