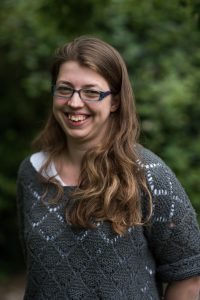 Location: The physics building – if you don’t know it, it’s the really ugly one right on the top of the hill!

I’m trying to detect planets around other stars, using the “Direct Imaging” technique: we basically point some of the biggest telescopes in the world at some of the brightest, closest stars and then try and filter as much of the starlight out as possible to reveal the planet. I’m particularly interested in stars with lots of dust – in these we can model the interactions we expect between the dust and the planets, and hopefully find some planets.

… and can you explain it in a single sentence?

I’m searching for planets around other stars, to understand how they might be forming, and how they are related to the dust that is sometimes also present around the stars.

I try to get in by around 8:30, although this doesn’t always happen if we’ve had an astrophysics pub trip the night before! I start by checking my emails and diary for the day, before getting down to some research. My most productive hours are early in the morning so I try and get some serious work in here: writing a few more paragraphs of a paper, debugging some code I’ve been writing or reading a relevant publication.

We break at 11am for a coffee in the interaction area – everyone from PhD students to lecturers attends. Conversations vary between serious and scientific, and much sillier topics, and sometimes we even do a Guardian crossword! Then it’s back to my desk to get a bit more work in. Since we’ve just had a coffee break, lunch is usually a quick sandwich at my desk. By about 3pm I’m starting to flag, so I do some of the tasks on my to-do list that don’t require thinking as hard – running through some routine data analysis, tweaking a figure for a paper I’m writing or drafting some slides for a talk. We break for coffee again at four, and squeeze in a bit more work before heading home, or out for the evening. I try and fit in a gym trip or a run during most days, so I’ll normally end up staying in the office a bit later to make up for the hour I took out during the day! It’s great to be in a flexible environment where I can head out and exercise whenever I like.

My evenings are pretty varied: sometimes we’ll have astrophysics pub nights or cinema trips, sometimes I’ll have a rehearsal with the university folk band or for the upcoming EUG&S production of “The Mikado”, and sometimes I’ll just head back home and relax.

The first discovery I made: just under two years into my PhD I finally directly detected a debris disk, a ring of dust orbiting the nearby star HD129590. This discovery has now led to my first paper as lead author, which was accepted back in May.

A good mix of activities! I like to keep active, and have just completed a half marathon. I’m also a keen climber with the University club. Outside of sport I’m a flute player, and am in a couple of university ensembles: the folk society band ‘Pigasus’, and the pit band for a university production of ‘The Mikado’. Apart from that I like to relax at home by watching terrible TV, or head out to the pub!

PhDs can be really tough on your mental health, and I wish I had been more prepared for that. I’ve struggled a lot with Imposter Syndrome, which is where you feel like you’re not good enough, and that sooner or later someone will realise that you’re secretly really stupid and kick you out. This also lead to me having a pretty unhealthy work/life balance because I was convinced that if I stayed in the department late every evening working then I could start to make up for the fact that I wasn’t really smart enough to be here. I’ve experienced some feelings in the realm of depression and anxiety, and some mild panic attacks – although I’m lucky and have never got to the point where I’ve needed professional help. Mental health is a constant journey for me, but I’ve grown to understand my brain and the way it operates far better, and feel much more equipped to cope with some of these feelings.

If I could go back, I’d warn my 22-year old self that the Imposter Syndrome was coming, and give myself a few tips for looking after my mental health more generally.

And finally – can you explain your research project in 5 emojis?

🔭- We use some of the best telescopes in the world to collect data for my project. World-class telescopes don’t look much like this, but it’s the closest that the emoji world gets!
🌟 & 🌍- We’re looking at nearby stars to try and identify exoplanets orbiting around them.
❓ – Are there planets around the types of stars we’re looking at?
✖️- This is maybe a pessimistic choice, but so far it appears that there’s not much out there. The answer to the question that the previous emojis pose is negative. That agrees with the literature: although planets are incredibly common (latest results suggest more planets than stars in our galaxy!), the specific types of planets that we’re looking for are rare, and are hard to detect. It might sounds like a negative, but is still very important in understanding how different types of planetary systems form.

Want to learn more about Elisabeth and her research? You can view her 3 Minute thesis video or follow her on twitter @astro_lizzie