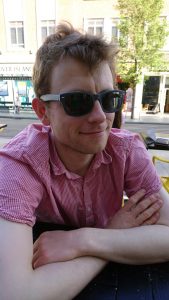 Discipline: Modern Languages / Medieval Studies (I kind of vacillate between the two, but it is of course perfectly possible to belong to both!)

Location: Mostly in the shared PGR office in Queen’s (not the same one as Imogene, sadly!), although I do spend quite a bit of time on the Exeter Ship Canal working with the University’s rowers.

Funnily enough, the current title is ‘Imagining and enacting education in the French texts of medieval England, c. 1120 – c. 1420’.

My research falls broadly into the domain of ‘Anglo-Norman’ studies: that is, the distinctive dialect of French that was used in England during the centuries after the Norman Conquest. I’m looking at literature, specifically didactic literature, and investigating how Anglo-Norman texts conceptualise and then carry out the process of education. As the incredible Ken Robinson points out, we all have an interest in education, one built on our own experiences in school; my research gives me the opportunity to marry that interest with my love for all things French and medieval.

… and can explain it in a single sentence?

How was education imagined and enacted through the French texts of medieval England?

I tend to get into the office at some point between 9am and 10am. Those morning hours are usually the most productive part of my day, so I try to get the bulk of my writing done before lunchtime, which I’ll often eat in the Senior Common Room (SCR) with other PGRs. The afternoons tend to be when I do my non-writing work, whether it’s replying to emails, doing ‘gradmin’ (I’m the PGR Representative for Modern Languages, so I have a lot of meetings to attend!), or teaching. I’m often involved in some sort of event in the evenings, too, from chess to playing trumpet in a couple of student and local bands.

That’s a tricky one … it’s a toss-up between finding out that I’d received funding from the University, meeting the people behind my scholarship fund, and presenting at the International Medieval Congress in Leeds last summer.

I’m a big fan of Organised Fun™, so I tend to get involved in a lot of student groups and societies (they’re not just for undergraduates, after all!). I’m currently Secretary of the Chess Society, where I occupy the exalted position of being the worst player on the Committee, as well as a cox and trainee coach for the University rowing club. Societies played a big part in helping me to settle in at Exeter, and have given me opportunities that I would never have got elsewhere. One particular highlight was coxing at Henley Royal Regatta last year: even though we were drawn against very strong opposition, I really enjoyed the chance to race on perhaps the most famous stretch of water in the world.

Stay geeky! Seriously, though, your enthusiasm as a researcher is one of your most valuable assets, and it’s worth taking a moment from time to time just to remind yourself of why you’re doing a PhD. In my case, it’s because I believe that Anglo-Norman is really, really cool, but whatever your particular interest, don’t forget that it will sustain you for three years of research. During that time, you’re allowed – nay, encouraged! – to be as unforgivingly, unremittingly nerdy as you want to be. Take that opportunity.

And finally- can you explain your research project in 5 emojis?

💭- The ‘thought bubble’ emoji reflects the ‘thinking’ element of my research: how was ‘education’ as a concept actually understood during this period? What did it mean to ‘educate’ in a period where the French term éducation did not yet exist?
✍️- The ‘writing hand’ is perhaps more obvious: how did these Anglo-Norman texts construct themselves in order to achieve these aims of …
🏫- … education?
📜- The ‘parchment’ emoji here isn’t just shorthand for ‘medieval’: it’s actually a reminder of the fact that the texts that I’m studying existed in a manuscript and oral culture, meaning that ideas of authorship and originality were radically different to our own.
❓- Why the question-mark? Well, I was going to put a French flag here, but that of course creates more problems: should I define my corpus of texts by language or by location? Will eagle-eyed readers spot the anachronism of a medievalist using a flag first adopted in the 1790s? Instead, I wanted my final emoji to be a reminder of the centrality of questions to the process of teaching, as well as of the exploratory nature of my research. Many of these texts are almost criminally under-studied, so I’m sure that my project will raise many more questions than it answers!

Edward Mills is a postgraduate research student working towards a PhD in French. He writes a semi-regular blog, Anglo-Normantics, and Tweets (somewhat more frequently) at @edward_mills. For more information on postgraduate Modern Languages study and research at Exeter, medieval or otherwise, check out @ExeModLangsPGs.