Chloe Asker is a 1st year Human Geography PhD student, who has just started a thesis entitled ‘Mindful geographies? Towards the therapeutic geographies of mindfulness.’ Her previous Masters work studied adult colouring practises and their relationship to wellbeing.
Twitter: @chloeasker

In February the Doctoral College held a ‘Wellbeing Week’. It was a week full of enriching activities and workshops based around PGR wellbeing. Mindful colouring formed part of the activities taking place on campus. Colouring worksheets were circulated around departments and colleges, and many PGRs spent a blissful moment colouring in-between the lines. 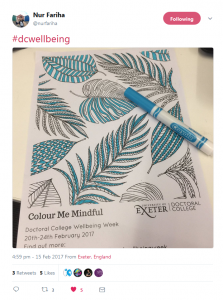 I am excited that the Doctoral College takes mindful colouring seriously, as often it is mocked as a ‘childish’ practice. As a geography student, this teasing is something that’s fairly common. The one joke or comment that stands the test of time is: ‘geography, isn’t that just colouring in?!’ This classic statement is often greeted with a fair amount of eye-rolling and exasperated sighing from the geographers questioned, and for many years during my Undergraduate degree, this had been my reaction as well. 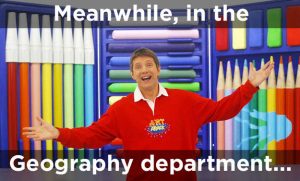 However, during my third year of my degree, I became aware of, and experimented with, a trend in ‘therapeutic’ and ‘mindful’ adult colouring practices. From here, instead of seeing colouring-in as an infantile practice, or as something to be mocked, I wanted to seriously engage with and understand this trend and its implications for wellbeing.

How did I research this?

The main aim of the research was to understand whether colouring is a mindful1 and therapeutic2 practice. To do so, I drew on qualitative methodologies of auto-ethnography and participant ethnography.

My auto-ethnographic practice allowed personal insight into colouring and mindfulness. Since I am not a trained mindfulness practitioner I needed to develop my personal knowledge of the practice. So I spent a considerable amount of time practicing mindfulness and colouring, I then reflected my experiences in a research diary.

The participant ethnography stage took place in a local mental health and wellbeing charity3 where I organised drop-in colouring sessions for clients who accessed the facility. The colouring and meditation sessions were followed by discussion and questionnaires.

What did I find out?

Two main themes came out of this work.

The first was that colouring cultivated an immersive awareness that simultaneously stretched out the moment, by paying close attention to it, but also made it fly by as we entered ‘flow’ (Csikszentmihalyi, 1997). This ‘flow’ space acted like a mental retreat: we were still embedded in everyday life, but we had found a therapeutic and immersive part of the world.

To illustrate this, one participant fed back to the group: “I was so focused and thought of nothing but colouring.”

Here, her colouring practice completely filling her consciousness, taking her away from everyday anxieties and worries. Instead, she was cultivating her attention on the micro-spaces of the page and of her hand-on-the-pencil-on-the-paper in motion. The attention to our bodily rhythms is something that we so often neglect. Colouring allowed this participant to come back to the body, and cultivate a mindful sense of awareness.

Secondly, a couple of participants felt that the colouring was more frustrating than helpful. For example, the minuscule details on the page caused discomfort for people with eyesight difficulties.

“I’ve been sitting there with reading glasses on, and still can’t see, I have to stop when the eyes go, that’s the downside.”

These experiences often lead to the abandonment of the exercise, and were sometimes met with a reluctance to try again. Also, some were hesitant to begin the practice; one participant felt they could not complete the colouring sheet ‘well enough’. Some found a personal pressure to attain a high standard of colouring, as they were measuring themselves against others and critically evaluating their own work.

These brief snapshots have shown that the therapeutic nature of colouring is subjective and multifaceted. For some it is met with a sense of anxiety due to their perceived potential at ‘failing’, or issues of accessing the material. But, for others it really does work, providing them with a retreat and a mindful immersion that is attentive to their breath, body, colouring pencils and the page. Overall, taking these engagements seriously is important to open up discussions about, and share experiences of wellbeing and mental health.

During the Doctoral College’s Wellbeing Week last year, colouring-in flyers and posters were posted around campus, find them here: https://www.exeter.ac.uk/media/universityofexeter/doctoralcollege/pdfs/Colour_Me_In-1.pdf

1I took a conceptualisation of mindfulness from John Kabat-Zinn’s widely used definition: ‘paying attention in a particular way: on purpose, in the present moment, and nonjudgmentally.’ (Kabat-Zinn, 2016, p. 4). There are many debates around this definition, and its possible simplification of Buddhist practice (for more detailed discussion see: Sun, 2014; Wilson, 2014)

Since becoming a PGR Chloe has set up a regular ‘wellbeing wednesday’ event in the Geography department with Emily Husband. The Doctoral College are supporting Chloe to run a Festive Craft event on Thursday 14th December from 3-4pm in Old Library Rooms 4&5. Come along to make your own research ‘bauble’, and enjoy some tea, coffee, mince pies and chat! You can sign up here.