Eilis Hannon is a Bioinformatician in the Complex Disease Epigenetics Group in the University of Exeter Medical School. Eilis’ research focuses on improving our understanding of the molecular processes involved in the development of schizophrenia and other neuropsychiatric disorders. She has an interested in the dynamic nature of human brain development and the way genetic variation influences this process.

About a year ago, 6 researchers from the University of Exeter signed up for the Alzheimer’s Society London to Paris fundraising cycle ride. We all work on different aspects of dementia and have benefited from funding from the Alzheimer’s Society, so this was our opportunity to give something back whilst pushing ourselves beyond our comfort zone of sitting behind our computers, or in our lab coats. 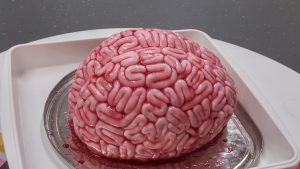 In the spirit of the ride we combined forces when it came to the fundraising and therefore set ourselves an ambitious target of raising £12,000. A few posts on Facebook, Twitter and other social media got us off to a good start but we knew we would need a few traditional fundraising activities to maintain the momentum and interest in our efforts – so we geared ourselves up for a few cake sales. All the cyclists (and many colleagues) got involved with the baking and we offered a wide range of cakes, biscuits and some bespoke themed delicacies including neuron cupcakes and the main event – the brain cake. A classic 3 layer Victoria sponge on the inside, covered in fondant worms and glazed with raspberry jam. It worked well as a centrepiece to draw passers-by in to the stall with some people even willing to try a piece. Across a coffee mornings and 2 cake sales held in the Forum at Streatham, St Luke’s campus and the RILD building we raised more than £1000 towards our total. 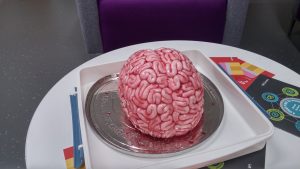 With the fundraising in hand, our attention turned to training for the actual cycle. In addition to commutes, quick spins before or after work and extended weekend rides, we also tackled some local Sportives such as the Dartmoor Classic, Jurassic Beast and the Nello. There were sore knees, thighs, close calls with tractors, flat tires, lots of energy bars, jelly babies and unfortunately one broken wrist which meant our six was down to five for the actual event. 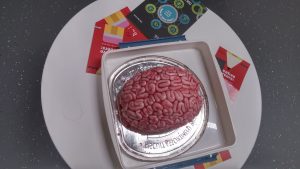 The start point was Blackheath Common in South London and early on Wednesday morning, along with 100 other cyclists all raising money for the same cause, we set off to Paris via Dover, Dunkirk, Cambrai and Soissons. The first day was arguably the hardest; busy roads through London, windy lanes with steep up and down stretches through Ken,t and the added pressure over getting to the Ferry on time! Once in France the main challenge was the distance (70-100 miles per day) and hours in the saddle. Personally, I suffered tightness and an ache between the shoulder blades from hunching over the handlebars, although this did distract somewhat from the other side effects of cycling for 8-10 hours. The “hills” in the route were no match for those we had tackled over Dartmoor, Exmoor, Blackdowns hills and Quantocks in our training, and in some ways were the most enjoyable bits. As promised, France truly was a joy to cycle through, with far fewer cars, and the wider more open roads across rolling terrain making for pleasant viewing.  After four days in the saddle, covering 250 miles in the sun, wind and rain, we cycled the final few miles across the cobbles (!) around the Arc de Triomphe and up towards the Champs D’Elsysee en masse, all wearing our blue and red Alzheimer’s Society Jerseys.

Most of the other participants were taking part because someone close to them had, or has Alzheimer’s Disease. The Alzheimer’s Society not only funds scientific research but also helps support patients and their families with small grants, Dementia Cafes, Singing for the Brain® sessions, and Dementia Advisers, Dementia Support Workers and Side by Side volunteers. Most of our fellow cyclists were more familiar with the support and information services that the Society provides, and while they whole heartedly support the research aspect, it is an area they are less familiar with. I think it was mutually beneficial, therefore, for us to hear about individual experiences, spend time and discuss the work we do. As scientists rather than clinicians, we perhaps forget all too easily the reality of having Alzheimer’s for both patients, family and friends. We know the statistics on the numbers affected and the cost to the economy, but this experience, more than anything, renewed our perspective and focus on the ultimate goal of what we do day-to-day. With the proof of our exploits posted on social media, the final donations came flooding in. Combined with all the other riders we raised an incredible £321,066, showing the value of these group efforts in generating momentum and enthusiasm for the cause, which ultimately leads to more donations.