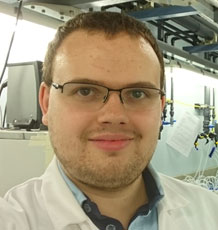 Common pharmaceutical contaminants have mode-of-action effects and reproductive toxicity which are sensitive to pCO2 conditions in marine invertebrates.

My research looks at the effects of pharmaceutical chemicals on marine invertebrates. These chemicals are excreted by humans and often not directly removed during sewage treatment processes; consequently they are released in to the environment where they come into contact with marine organisms. Furthermore, I look at the impacts of carbon dioxide in water (ocean acidification) on the uptake and toxicity of these chemicals to marine organisms.

…and can explain it in a single sentence?

I study the effects of human pharmaceuticals released from sewage treatment on marine organisms and how aspects of climate change impact these effects.

My days are highly varied. Often I can spend weeks in the office writing and researching but I prefer lab work. My lab work can range from testing the effects of cocaine on marine worms to performing artificial fertilisations with sea urchins. On the odd occasion I even get to enjoy a bit of muddy fieldwork around Devon.

Getting my first citation. Although there is something special about having your PhD work published with you as a first author, there is something even more exciting about people citing your work in their research. It shows that the reach of your research truly is global.

I am obsessed with the sport of korfball. It is a Dutch sport that is a basketball / netball hybrid. I train 5 times a week with both Exeter University and Exeter City and play matches at the weekend.

Don’t get too caught up in the finer details! I am self-confessed obsessive-compulsive about things and like things to be just right. Unfortunately, it is all too easy to spend the vast majority of my time perfecting small things and not focussing on the bigger things. A certain amount of perfection is beneficial, but don’t get too carried away.

And finally- can you describe your research project in 5 emojis