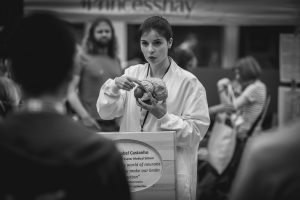 Isabel is a PhD student in the Complex Disease Epigenetics Group as part of the Alzheimer’s Society Exeter Doctoral Centre. Her PhD focuses on evaluating genomic consequences of Alzheimer’s Disease pathology.

It all started with an application…

I was introduced to Soapbox Science in 2016, a few months after I moved to the United Kingdom to join the University of Exeter as a PhD student. When I first heard about it, I was very happy to find there was such an initiative in place, immediately feeling very enthusiastic about participating in it. Although I was not very confident I would be selected, and was afraid it would be too early in my career to do it properly, I still decided to turn my enthusiasm into an application to be a speaker anyway. To my surprise, my application was successful. I could not put into words my excitement when I read the email telling me I was selected to be a speaker at Soapbox Science Exeter, and little did I know then that it would turn out to be one of the best and most fun experiences I had so far as a PhD student – from the preparation, training, interviews, networking, inspiration from other female scientists, to actually standing in the soapbox per se. From that moment on, Soapbox Science won a very special place in my heart. Even after my involvement as a speaker came to an end, I remained accompanying Soapbox Science closely, always wishing to return and continue being involved. Two years later, Dr Safi Darden and Dr Ana Neves challenged me to join them as organizer of Soapbox Science Exeter and my answer could not have been other than “yes”. The three of us are looking forward to receiving enthusiastic applications for Soapbox Science Exeter 2018 from inspiring female scientists, which can be submitted here. 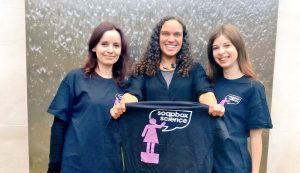 Soapbox Science was co-founded by Dr Nathalie Petorelli and Dr Seirian Sumner to increase the visibility of women in science and challenge gender stereotypes about the ‘typical’ scientist. The first Soapbox Science event was held in London in 2011, reaching Exeter for the first time in 2015.

Even today, the public perception of ‘a scientist’ is still that of the male researcher, so initiatives such as Soapbox Science are irrefutably vital to change misconceptions and highlight that women can be (successful) scientists as well. Moreover, science, as many other areas, is still male-dominated, particularly in higher positions. An example of this is that less than 10% of all professors in the UK are women. And the problem does not seem to be related with attracting more girls to science. Although some fields are more unbalanced than others (Maths, Physics, Computer Science, and Engineering, as a few examples of scientific areas with a higher percentage of males compared to females), the major problem seems to be related to career progression, particularly when it involves balancing a successful career with building a family, which can become quite challenging and often impossible for some women. By having an all-female group of speakers, Soapbox Science events aim to raise these issues and promote and encourage female scientists and the science they do. Needless to say male colleagues are more than welcome to join as collaborators and volunteers.

Soapbox Science is open to any enthusiastic female scientist, from PhD students to Professors, from academics to industry researchers. Come bring your work to the streets and help us inspire and encourage the next generation of scientists. 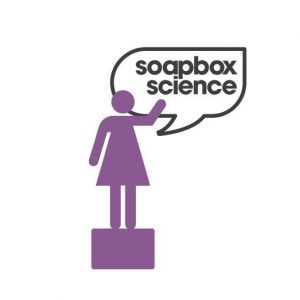