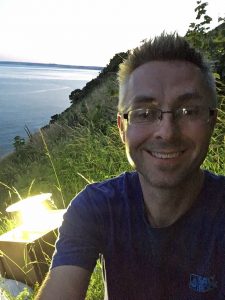 Richard was recently awarded a PhD by Publication in Biological Sciences by the University of Exeter. His thesis on the role of citizen science in assessing biodiversity trends for British butterflies and moths was supervised by Dr Ilya Maclean from the Environment and Sustainability Institute at Penryn and Dr Rob Wilson (formerly in the Biosciences Dept on the Streatham campus). He was one of the first Exeter students to have an online PhD viva examination.

When I handed in my thesis on 14th February, coronavirus still seemed a remote and unlikely threat to the normality of life in Devon and Cornwall. I’d done the hard part, my papers were published, my extended introduction was written and now it was just the final, nerve-wracking hurdle of the viva to endure (or enjoy as I kept being told by everyone I asked for advice). My examiners had been appointed (two external and one internal for a PhD by Publication) and the date had been set in late April. All that was left to do was to read and re-read my thesis and brush up on some of the key papers that I’d cited. I’d even attended a University workshop entitled Preparing for your Viva, which was excellent and I would thoroughly recommend everyone to attend.

And then, of course, the lockdown happened. Initially, the viva was pushed from the front of my mind by concerns about family and friends getting ill, dealing with school closures for my teenage children and adapting to changes in my job (I work full time for the charity Butterfly Conservation). However, before long I began to think about the viva again. Now though, my main worry wasn’t about being asked tricky questions about the statistical techniques I’d used in Chapter 3, but about the viva being postponed indefinitely into the post-pandemic world.

It was a great relief, therefore, to be contacted first by my supervisor and then by the University PGR admin team and offered the option to have a virtual viva. The speed with which the University moved to get new policies in place to allow online viva examinations was fantastic. With the addition of another person, a Non-Examining Independent Chair, to the panel, the stage was set.

I did have a few additional worries – would I be able to join the meeting OK at the appointed time without having a frantic scramble to reboot the software as the minutes ticked by? – but I would have had alternative worries for a face-to-face viva (car breaking down, forgetting to put trousers on etc. – oh no that was just a bad dream!). So, I had a few practice runs to make sure I was completely familiar with the software and hoped for the best.

Three and a half hours later and it was all over. The technology worked smoothly and without a hitch, there was no off-putting time lag and the examiners were really well organised enabling the conversation to flow easily without the awkward pauses and speaking over each other that is a feature of some online meetings. It was thorough and challenging, but yes it was enjoyable. Top tip for a question to expect and prepare for (neither of which I had done!) – which of your chapters is the strongest and which the weakest and why?

My supervisors had joined the meeting at the start to greet the examiners and then came back online at the end to help with the celebrations, which was a really nice touch. Having never done a face-to-face viva, I can’t make a true comparison, but I don’t think that the online viva was any more difficult an ordeal than a traditional one. Indeed, without the stress of travel and the formality of being in an unfamiliar room with a panel of examiners, it was probably a more conducive environment to enable me to defend my work effectively and have stimulating discussions on wider issues. Best of all, being able to sit my viva and complete my PhD despite the lockdown enabled me to take something really positive from these dark and difficult days.