On 7th March the European Commission published in the Official Journal an invitation to submit comments in the next month on the investment contract for Hinkley Point C. The UK Government has reacted by sending a letter to its ‘stakeholder’ contacts, in which Michael Fallon concluded, ‘I therefore urge you to support our case by submitting your views in the public consultation’.  The reason for this is despite public statements from DECC that this is a normal process, they are acutely aware of the Commission’s views of the project, following the publication of a letter in January which highlighted their concerns. The letter didn’t pull any punches and was described by the Financial Times as a ‘scathing initial assessment’ and as ‘a damning critique’ by the Daily Telegraph. Amongst other issues, the Commission noted that the package proposed support both through electricity price guarantees and credit protection; that the level of support over the 35 years of the proposed electricity price guarantee is potentially as much as £17.6 billion, which would be £1.6 billion more than the estimated £16 billion cost of building the plant, and that other nuclear projects have been developed without State aid.

The negotiations around the proposed Hinkley deal have been long and tortuous and started in 2006 when the then Prime Minister Tony Blair announced nuclear power was ‘back on the agenda with vengeance’.The coalition government subsequently pledged to continue nuclear development and in August 2010 the then Secretary of State Chris Huhne said, ‘We are on course to make sure that the first new nuclear power station opens on time in 2018’.During this period and to the present day, the expected costs of nuclear power in the UK have risen dramatically as has the estimated construction time. As can be seen in the graphic below, when Tony Blair made his statement DECC were forecasting the cost of nuclear electricity would be less than £40/MWh (in 2013 values).

Since then the price has risen resulting in the government agreeing a deal with EdF that fixes the price, with index linked increases, of £92.5/MWh and for 35 years.Liberum Capital said of the deal, ‘ We are frankly staggered that the UK Government thinks it is appropriate to take such a bet [on future fossil fuel prices] and under-write the economics of any power station that costs £5million/MW and takes 9 years to build’.

The Hinkley case is important both domestically and internationally.The proposed price guarantee, through a scheme called the Contracts for Difference (CfD), would give reactor builders an electricity price which is currently double the market rate. Despite this EdF and the UK Government claim that “it is estimated that the UK new nuclear programme will save households £74 a year in today’s prices by 2026-30”. However this might only be true in an extreme situation. This is shown in the figure below, which presents the most recent electricity price forecasts from DECC and compares this to the proposed strike price. As can be see only in the high price electricity scenario is the strike price above the market price and only then for a few years. Under the reference scenario, the most likely according the DECC’s current thinking, the power price will be more than 20% below the strike price and more than 40% in their low price forecasts.  It is also important to note that the UK has one of the highest market prices for electricity in Europe, in Germany, the year ahead price assessment are currently around €37/MWh, in France and Netherlands about €45/MWh, compared to the UK of about €60/MWh (£50/MWh), according to Platts. 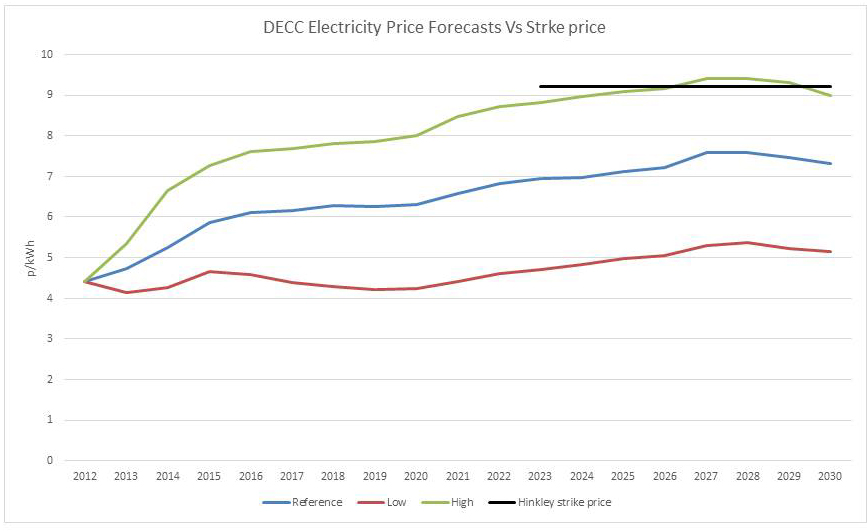 Therefore if the current deal is approved by the European Commission as proposed it will be a good financial deal for EdF and nuclear builders, and under most scenarios a bad deal for consumers.However, it will also be a bad for the decarbonisation of the power sector. In recent months the prices consumers are paying for their electricity bills has risen up the political agenda and David Cameron said in October 2013 “We need to roll back some of the green regulations and charges”.As noted by the Commission and others, Hinkley could cost the taxpayer or consumer tens of billions of Euros over the next 35 years, the period of the price guarantee.Already many renewable energy sources are cheaper than this and much quicker to build.In Germany since 2007 30 GW of solar pv has been installed, which annually produces more power than is expected each year from Hinkley C. Furthermore, the price guarantee offered to an average of renewable power (ie solar, wind, biomass) in Germany is now €121/MWh (£100/MWh) and is expected to be on a par with nuclear by the start-up of Hinkley. As renewable support costs in Germany continue to fall it is expected to be roughly half the Hinkley support scheme in the 2040s.

Few outside the offices of DECC and EdF think that this is a good deal for the UK or its consumers.Over the prolonged period of its negotiations the situation has radically changed with renewable energies now widely recognised as the cheapest option to move away from fossil fuel dependency.Enabling higher penetrations of renewables requires far reaching changes in the operation, ownership and infrastructure of the power sector.However, investing in a power station that might operate 8 years from now and cost at least £16 billion to build is going in the opposite direction and could leave the UK with a gold plated white elephant.