In 2012 the IEA released its Golden Age of Gas report explaining that we could be entering a new era where gas beats coal to become the second most important source of global energy by 2030. I remember people across industry rejoicing that this heralded the end of all of the talk about low-carbon and renewables and gas clearly did have a future. What these people ignored was the fact that this pathway put us on a 3.5 degrees Celcius warming pathway at odds with the already problematic globally agreed 2 degree limit. Last week UKERC released two much more realistic reports and ran an event looking at the future of gas use both at a UK and international level.

In this blog I aim to briefly describe these new reports which presents a fascinating global viewpoint on the international issues around gas but go on to show how it says little new for UK policy but simply repeats what we knew already, that gas use must come down if the UK is to play it’s part in reducing global CO2 emissions and that shale production prospects for the UK have been incredibly overhyped, something which I explored in a previous blog.

The first UKERC report which looked at ‘The UK’s Global Gas Challenge’ was concluded and summarised neatly by the authors who say: ‘We would advocate a ‘gas by design’ policy that plans now for the changing role of gas in the UK energy mix, thus ensuring future UK gas security. A blind belief that a future UK shale gas revolution will solve all our problems does not fit with this remit. It seems highly likely that the UK will end up needing more gas for longer than current policy predicts and a failure now to pay sufficient attention to the issues that influence UK gas security will mean that consumers may end up paying more to secure that gas.'(p44)

Basically what the authors of this first report were saying was that as UK gas import dependency continues to increase (now about 50%), UK based shale gas will not have a meaningful impact on reducing imports and in their words ‘Any talk of shale gas making the UK self-sufficient again, let alone allowing significant exports, is far fetched. (p35)’. The authors’ call for a ‘gas by design’ policy reflects uncertainty in the future demand and supply of gas in the UK suggesting that more intervention in the market as well as the development of more gas storage is necessary to protect consumers from price and security risks. This also reflects the very liberal nature of the UK’s gas market and associated security. It’s up to suppliers to guarantee gas security for consumers, not the Government and in fact, the authors critique much of the previous work on upstream gas security as this has focused on Government relations rather than the people actually sourcing the gas (firms) and the governance which underpins the firms.

The second report: A Bridge to a Low-Carbon Future? Modelling the Long-Term Global Potential of Natural Gas   looked at results of global energy modelling conducted at UCL and produced what I consider some much more interesting results than the other report. These were that at a global level:

Breaking this down into regions, the table below shows gas consumption at 5 yearly intervals in the 2 degree scenario with CCS. You can see that this varies significantly depending on the region, based on current systems and resources. The EU’s gas peak is in 2030 and the Middle East’s peak would not happen until 2050.

Whilst the work clearly highlights the issues at an international level, what the report doesn’t drill down into is single countries. I want to expand on the UK’s position in light of the reports and current thinking and my analysis is unlikely to please gas lovers.

Firstly, in terms of gas supply, UK gas imports are generally increasing and as we have already seen, domestic shale gas will not offset our gas imports. This therefore means that the UK will become increasingly exposed to the international gas markets and associated price and security risks. This is a risky situation to be in and clearly there is merit in thinking about switching away from gas for these reasons alone.

Secondly, from a climate change emission perspective at a UK level, increasing our gas demand significantly will not reduce emissions. We are already very reliant on gas as we have already made the dash (and as a result reduced emissions). The UK’s gas generation strategy suggests only slight increases in CCGT electricity capacity to get to a 100gCO2kWh level by 2030 (an extra 5GW compared to today’s level in 2030) although this new capacity would be working at higher load factors. Whilst this new capacity and the increase in load factors would replace coal plants which are expected to be closed thereby reducing emissions, renewables are expected to increase at a much greater rate and as a result produce greater amounts of low-carbon electricity. DECC’s expected generation capacity from the gas strategy is shown below: 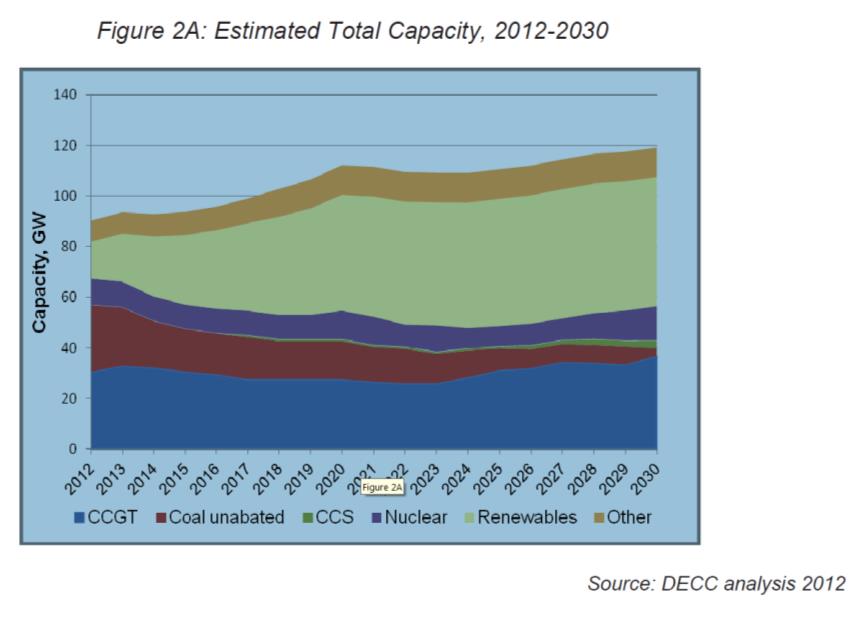 As for heat generation at a UK level, the UK already has one of  the highest density and highest coverage gas networks in the world with 83% of homes connected to the gas network. As a result pretty much all of the cost-effective gas connections have been made. The fuel poor connections scheme allows gas networks to connect homes which are easy and cheap to connect but there are only a small number of these left. Despite strong political will to further increase network coverage, this simply isn’t possible in a cost effective way.

The Government’s heat strategy is therefore rightly focusing (but not limiting) efforts to reduce emissions from heating to people and businesses not connected to the gas grid. It therefore looks unlikely that the UK will increase gas use for heating and in fact, homes are using less and less gas every year due to fuels costs and the rollout of energy efficiency.

Overall the UKERC reports offer a fascinating insight into the potential future role of gas in the global energy system whilst showing that the Government has been overselling the potential of shale. In an interview with the Telegraph, one of the report authors said:  ‘ Where the government got its [shale gas] rhetoric from I’ve no idea’. And this hype continues with Government considering a shale sovereign wealth fund and a training academy for shale gas the day before this UKERC report was released (reported separately by my colleague). All this at a time when even the Government’s own forecasts see a reduced future role for gas. It seriously makes me wonder where all the noise around shale gas is coming from.

Richard Lowes is a PhD researcher in the Exeter Energy Policy Group http://geography.exeter.ac.uk/staff/index.php?web_id=Richard_Lowes. He blogs at: http://gastransitions.postach.io/

This blog first appeared at: http://gastransitions.postach.io/ukerc-gas-report-fascinating-at-global-level-but-the-uk-has-had-its-golden-age