During 2014 electricity production from renewables grew by 20%, to provide a total of 64.4 TWh ( 19.2% of total electricity generation). For the first time renewables provided more electricity than nuclear power, who’s share in total generation shrank by 9.7% to 63.8 TWh (19%).

While this crossover was inevitable, it has come much sooner than many expected, due to generic problems in the nuclear fleet and falling renewable technology prices. This turning point is a culmination of two decades of decline for the nuclear industry following the completion of the last reactor at Sizewell B in 1995. Subsequently 25 of the 26 reactors of the Magnox design have closed and there are now just 16 reactors in operation.  Consequently nuclear power production peaked in 1998, at 90.6 TWh, and has now fallen by 40%. 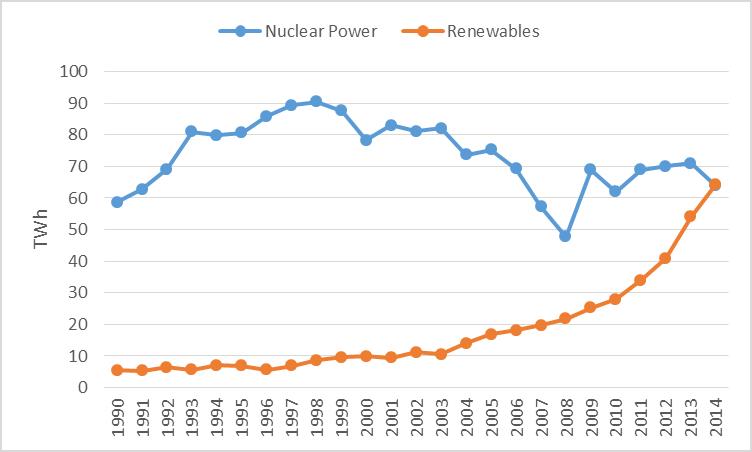 In contrast renewable energy has risen dramatically. In 1998 renewables provide just 8.6 TWh of electricity and its output has risen in 2014 by over 600%. Interestingly 1998 was also the year that the UK signed the Kyoto Protocol and it is clear that since then the growth in deployment of renewables have more than compensate for the closure of the country’s nuclear power stations and play a positive and vital role in decarbonising the energy sector.

The growth trends are a result of ongoing public support for renewable energy and falling technology prices.  The UK government’s latest round of financial support schemes, demonstrate another turning point as both onshore wind and solar PV will now need  less financial support, through the Contract for Difference, than that proposed for Hinkley Point C. What is also remarkable is that over the term of office of the current UK Government, in Germany they are producing more additional electricity annually from solar PV than would be generated by Hinkley Point C.  Therefore renewable energies that were less than a decade ago deemed to be insignificant and costly now out complete nuclear power on both price and deployment rates.

These global deployment and technology trends are in stark contrast to the ongoing government support for Hinkley Point C. However, the failure of the project to meet its initial deadline for the final investment decision in July 2014 and then by April 2015 does offer the new government an opportunity to take a critical review of the financial and economic implications of going ahead with the £34 billion project.