Is the ‘peak heat’ issue all it’s made out to be?

If the UK’s Climate Change Act target of an 80% reduction on 1990 emissions levels by 2050 is to be met, it’s generally believed that space and hot water heating need to be fully decarbonised in order to allow room for emissions in other sectors such as aviation and industry (e.g. (DECC, 2013, Committee on Climate Change, 2016). Beyond 2050, say 2070 (possibly in my lifetime), we’ll need to go beyond 80% and likely to negative emissions if we are to keep to a below 2 degree scenario. The 1.5 degree scenario (which Paris aspires to) would of course need even stricter reductions. At some point then in my lifetime, heating needs to be fully decarbonised to potentially negative carbon levels.

I’m currently working on a project considering the changing role of ‘incumbent’ businesses in the move towards low-carbon heating in the UK. I’m considering who they are, what they do, how they may be affected by the move towards low-carbon, their current responses to the transformation and finally considering the implications of the actions of these companies for decarbonising the UK. On the advisory board of our project is Dr Robert Sansom. Rob completed a PhD focusing on decarbonising space and water heating in the UK and so has valuable knowledge to support our project.

From Rob’s PhD came a now famous graph which displayed the UK’s peak electricity demand and peak heat demand for 2010 (shown below in Figure 1). Basically Rob created a model which considered space and hot water heating (not industrial heat) and by using various data sets such as gas demand statistics and the actual operation of appliances, estimated half hourly heat demand in the UK. It showed that these half hourly peaks for heat are much higher than for electricity, with some peaks potentially over 350GW for the year in question. The graph was a call to action and highlighted many issues around decarbonising heat and the potential issues with heat electrification (electrification has been seen as a key part of heat decarbonisation). 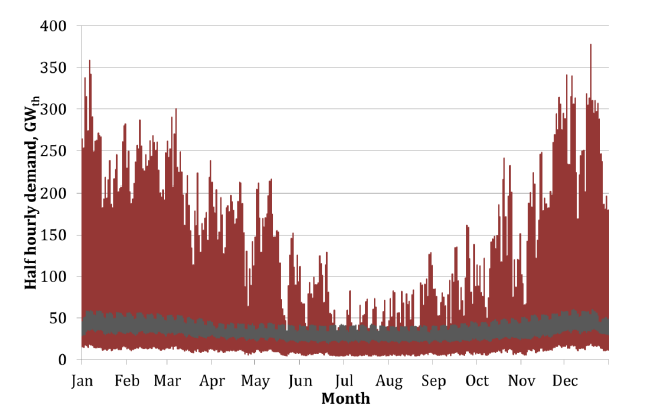 The graph has been used widely and made its way into the 2013 DECC heat strategy work to make the point that electrifying UK heat demand would have major implications for the power grids and electricity capacity (DECC, 2013). The graph has since been used by the Energy and Utilities Alliance (a trade body representing the mostly gas heating industry) (EUA, 2016), as part of the Gas Network sponsored ‘Green Gas Book’ (The Parliamentary Labour Party Energy and Climate Change Committee, 2016) and I have noticed more recently is even being distributed on business cards by the UK’s largest boiler manufacturer Worcester Bosch (see below).

In the three examples I’ve listed, the graph is being used to show that decarbonising heat is very difficult and expensive and the country should continue to use the existing gas network but with lower carbon forms of gas. This is a strategy promoted by and which suits the incumbent businesses, businesses for whom the decarbonisation of heating using electrification could be an existential threat in the case of gas networks or would create major changes for appliance manufacturers (some of whom sit in very comfortable market positions).

But is the use of that graph pure lobbying or simply incumbent companies presenting options for decarbonisation?

Of the two strategies which have been proposed to decarbonise the gas grid, firstly using biogas or secondly converting the grid to hydrogen, both have clear issues. It’s obvious that biogases, due to the availability of bio-resource will not be able to fill much of the gap and may be of more value elsewhere and have limited carbon reduction potential, issues I have explored in detail before (Lowes, 2015). Secondly, the possibility of converting the gas grid to hydrogen is extremely uncertain and has major technical, financial, carbon reduction and energy security issues which I have also explained in a previous blog  (Lowes, 2016).

From a carbon perspective, there are only really two technologies which can provide very low carbon heat, solar thermal and products such as storage heaters and heat pumps which use low-carbon electricity; we need to get to zero levels of carbon from heating by 2050 and go even further after this and so these are the key options which we must start delivering. While further R and D is very important, we do not have the luxury of time for tinkering around with the gas engineers’ pet technologies which look unlikely to be that helpful. The heat sector needs a transformation based around known technologies which needs to begin now.

I’m not suggesting that the UK’s peaky heat demand is not an issue; as we move towards low-carbon heat, the power grid will need strengthening and more power generation will be needed. However, I am suggesting that the issue is being used as a tool by incumbents to delay the decarbonisation of heat (by saying how difficult it will be) and being used to propose solutions which are suggested to be easier (but are deeply uncertain and have their own problems).

Further still, Rob’s graph is being used in isolation to highlight an extreme example which ignores temporal aspects and technological advancements. I’m not saying the graph is necessarily anomalous, but it does have limits which mean it mustn’t be used without consideration of the wider change. I’ll briefly explain some of these limits.

I’m not saying that there isn’t a heat peak, but Rob’s graph shows one (cold) year, and its use as a tool by incumbents to promote their agenda ignores the temporal aspects and changes already underway in the energy system explained above. Together, rising temperatures, a rollout of energy efficiency and the development of smart controls and storage would significantly reduce those peaks. The smoothing of those peaks would make a low-carbon electric heat future, while challenging, realistic and significantly easier. It would also mean that the requirement to rely on the instantaneous and high temperature characteristics of gas would no longer be there.

Thank you to Dr Robert Sansom for providing comments on a previous draft of this blog.

Committee on Climate Change, 2016. Next Steps for UK heat policy, Available at: https://www.theccc.org.uk/wp-content/uploads/2016/10/Next-steps-for-UK-heat-policy-Committee-on-Climate-Change-October-2016.pdf.

DECC, 2013. The Future of Heating : Meeting the challenge, London. Available at: https://www.gov.uk/government/uploads/system/uploads/attachment_data/file/190149/16_04-DECC-The_Future_of_Heating_Accessible-10.pdf.