AI in energy: is it as smart as you think? Part One

Artificial intelligence (AI) is currently in the spotlight due to recent rapid expansion of AI technologies across a range of applications in both private and public sectors. Applied AI technologies can be powerful, augmenting human capacity to address more complex situations and challenges in shorter timeframes. Indeed, AI was recently named as ‘the emerging power behind daily life’ by Microsoft’s Kate Rosenshine in her keynote speech at the 2018 Tech UK Digital Ethics Summit. These new technologies also impact all levels of the UK energy system from enhancing personalisation of domestic customer service through to facilitating predictive maintenance of national transmission infrastructure.

This three-part blog series will address the growing use of AI in the energy system. Part One (below) is a scene-setter for readers who are unfamiliar with AI, addressing general background and terminology. Part Two will analyse three socio-economic enabling factors that provide a fertile ground for the adoption of AI in energy, and provide examples of where applied AI technologies are already appearing on the market. Part Three will address policy implications of the growth of AI in the energy system, opening the conversation regarding future governance.

The definition of AI is highly contested. Across various definitions one fairly consistent – but problematic – feature is the reference to “intelligence” or “intelligent behaviour”. Definitions thus become based on a highly subjective concept that is variable across time and culture. For example, some definitions base AI on the concept of the human mind while others advocate for recognition of more diverse forms of intelligence, or sub-sets of general human intelligence. These could include animal intelligences (e.g. the behaviour of fish to move within a swarm); task-based intelligences (e.g. information search or language translation); or emotional intelligence (e.g. tact and empathy).

Kurzweil [1] further breaks AI down into two broad categories: weak AI and strong AI. While these terms do not escape from all ambiguities surrounding the concept of intelligence, they do provide a useful framework that distinguishes between AI focussing on specific, task-based applications (weak AI), and that imbued with more general intelligence (strong AI). There is no universally agreed benchmark for what ‘strong’ AI might look like, and how this might relate to the nature and limits of human intelligence. Even if it were decided that the human mind was to become the universally agreed benchmark for strong AI, ambiguity would remain. For example there is no singular understanding of the limits of human intelligence, ‘non-logical’ elements of the human mind, or human neurodiversity [2].

To add further complexity, for some, what constitutes ‘true’ AI is challenged as AI develops. Intelligence is often regarded as a complex and ultimately incomprehensible property, so as soon as methods are developed to build certain facets of intelligence, they quickly fall out of the remit of what is considered ‘true’ intelligence. This issue is known as ‘the AI effect’ or ‘Tesler’s theorem’:

“… once some mental function is programmed, people soon cease to consider it as an essential ingredient of “real thinking”. The ineluctable core of intelligence is always in that next thing which hasn’t yet been programmed. This “Theorem” was first proposed to me by Larry Tesler, so I call it Tesler’s Theorem. “Al is whatever hasn’t been done yet.””[3]

Due to the technical nature of the field, a significant amount of specific terminology is used in discussions surrounding AI and its applications. The table below contains an overview of common AI-related terms and definitions.

This diagram is designed to present a simple visual illustration of relationships between some of the terms defined in the glossary above. It is not drawn to represent any particular scale and is not an exhaustive ‘map’ of all techniques and technologies present in the AI landscape. 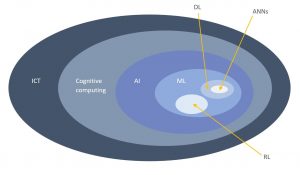 This blog has highlighted the difficulty in defining AI, introduced common AI-related terms, and presented a visualisation of relationships within the ICT/AI landscape, designed to provide readers with a general introduction to the field. The second part of this blog series will examine three socio-economic factors currently providing a supportive environment for the development of applied AI in the UK energy system, and examples of where applied AI technologies are starting to appear on the market.

With thanks to Deepak Kumar Panda for technical advice in formulating the glossary.