The answer to our heating problem is blowing in the wind

The UK has a target to become climate neutral i.e. to reach net zero emissions by 2050. This means replacing fossil fuels with something else. As the government grapples with the laundry list of challenges standing between the UK and its goal of reducing climate emissions to net zero by 2050, two problems in particular top the policy agenda.

The first is how to overcome our dependence on the gas-fired central heating we use to warm our homes and other buildings.

The second is how to reduce emissions from electricity production to practically nothing over the coming decade, a prerequisite for hitting the mid-century net zero target.

But it is increasingly clear to us that they can no longer be considered in isolation.

Warming to a theme

First, heating. There are several technical possibilities for taking the emissions out of our heating systems, each with pros and cons.

It could be as simple as electric heaters but heat pumps are widely understood to be more cost-effective than plain electric heating. This is because their coefficient of performance (COP) means that for each unit of electricity used, you get around 3 units of heat out. Plenty of analysis points towards the cost-effectiveness of heat pumps in the UK energy transition including that by The Climate Change Committee[1] and the UK Energy Research Centre[2]. Some people fret that using electricity to produce heat will push up emissions from producing it. But, of course, that really depends on how the electricity is produced in the first place.

A second option could be to convert the UK’s gas grid to run on hydrogen. This hydrogen promotion was originally based around using carbon capture and storage technologies and was led by existing industry interests with a lot to lose. It was suggested that producing hydrogen from carbon capture would be cheaper than converting houses towards heat pumps. But carbon capture technologies do not have a good track record, they also have residual emissions and so wouldn’t be zero carbon. We also don’t really know what this would cost. The continued reliance on natural gas, from which hydrogen would be produced, would also increase the GB reliance on gas imports. In 2019, 54% of the UK’s gas was imported.

More recently, the push for hydrogen to be used in heating is generally associated with green hydrogen, i.e. that produced from renewable electricity. In theory, you could convert your electricity from renewables using an electrolyser, pipe this around the country and burn it for heat. But, the pipes aren’t currently suitable, neither are boilers and fundamentally that would be a really inefficient process. In the electrolyser you’ll lose around half of the energy, whereas if you use the electricity in a heat pump you’ll get your COP uplift meaning that you’d need around six times the generating capacity for hydrogen as you would for heat pumps[3].

Dropping the hammer on offshore wind

As governments around the world have supported research and early deployment of renewable energy, market forces are biting and driving down costs (see Figure 1). Momentum is now building in the energy system towards renewable electricity and flexibility[4]. While solar photo-voltaics have seen some of the most staggering cost reductions, for the UK, which is better known for its strong winds than its sunny weather, it is the reductions in the cost of electricity generated by wind turbines that is far more important. 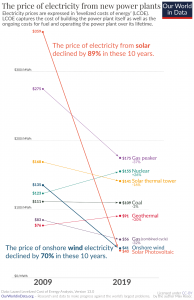 There has been huge growth in UK renewable energy capacity over the last 10 years and it’s been driven by policies including the feed-in-tariff, the renewables obligation and the contracts for difference auctions scheme. In 2019, 36.9% of the UK’s electricity was produced from renewable sources, an increase of almost four percentage points on the previous year. Data for 2020 from the Government are not yet available but it’s expected that this figure will have grown again, perhaps by even more.

Offshore wind in particular has captured the nation’s heart, or at least the heart of its government and advisors. The UK’s Climate Change Committee has recently stated that in a cost-effective scenario ‘Wind, particularly offshore, is the backbone of the [electricity] system’[6] (p135. Our italics).

Offshore wind is a national success story that people haven’t really heard much about. The UK is a bone-fide world leader in this technology that generates electricity from the largest rotating machines mankind has ever produced[7].

There are currently 10.5 gigawatts of offshore wind in the UK’s waters[8], that’s more than three times the capacity of the nuclear power station under construction at Hinckley in Somerset, and more than any other country has managed so far.

As a fresh faced (well one of us) interns in London, we were shocked at the financial support being given to offshore wind which was back in 2010 receiving somewhere between £140 and £180 per megawatt hour compared to the market price of around £40 to £80[9]. 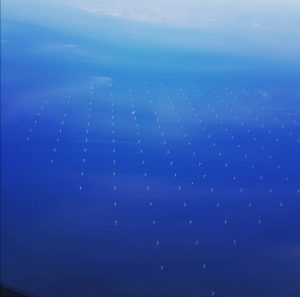 Figure 2. London Array from the air

Just as the UK was a leader in gas production as the North Sea gas reserves were discovered following the Second World War, the UK now has the potential to use the sea bed for a more future proof and sustainable technology. And yes, we know the wind doesn’t blow all the time but, it does blow a lot of the time, particularly out to sea. In fact, the ‘capacity factors’ of offshore wind farms (i.e. how much they generate) are higher than many had expected leading to higher financial returns than expected.

But offshore wind in the UK is about way more than producing electricity. Flatlining productivity in the economy, even before the Covid pandemic struck, means that governments are scrambling to create new industries and the highly skilled jobs and international comparative advantage that come with them. And, although the UK’s performance in this direction has been pretty dismal so far (despite having the skills to supply much of the value for offshore wind farms, UK firms tend to lose out to overseas suppliers[11]), there are high hopes that facilities and workers built to service legacy industries such as oil and gas production can be put to work alongside a new generation of well-paid offshore wind workers.

To put that number into perspective, current peak national electricity demand is around 59GW[13].

But of course, building wind turbines will not, on its own, decarbonise the energy system; having huge volumes of clean electricity available only makes sense if we can use it all. As we grow renewable electricity generation, we need to deploy appliances that use electricity rather than fossil fuels.

Under any circumstances, heat pumps are an excellent clean energy technology with many advantages. In a country about to install the greatest fleet of offshore wind turbines the world has ever seen? It’s a no-brainer.

The argument that relying on electricity to heat homes may increase emissions is dead and is expected to become even deader as those gigawatts of offshore wind are deployed. The image below from National Grid show how emissions from the electricity have dropped by two thirds in just eight years. Based on the 2020 figure and a coefficient of performance of 3.74 (Richard’s system COP as measured[14]) one can get heat delivered at 48gCO2/kWh.

Figure 3. The decarbonisation of British Electricity[15]

This is a reduction of more than 75% compared to a gas boiler with typical 86% efficiency[16].

It’s not clear why someone would promote burning hydrogen and wasting half of the energy in an electrolyser rather than using the electricity directly in the first place. Or better still in a heat pump with an effective 300% system efficiency.

Analysts always used to think that heat pumps looked like a cost effective element of a low carbon heat system. And that was before these spectacular falls in the costs of renewables combined with the UK’s globally significant wind resource. If we now maximise offshore wind and switch our heat demand to heat pumps not only can we meet our carbon targets but we can also reduce imports and deliver wide economic benefits.

But it won’t be easy by any stretch. Rolling out heat pumps to millions of homes requires step changes in house holder preferences and nothing short of a reconfiguration of the domestic heating industry. Behind this, structural reform of the UK’s energy policy landscape is needed.

Sustaining the UK’s offshore wind boom demands that the promised jobs and industrial development materialise – it’s harder than ever to imaging such an epic infrastructure undertaking remaining politically acceptable if 80% if the value is sent overseas.

Clearly the potential prizes are significant, but the timescale for action is short.

[5] Our World in Data, 2020. Why did renewables become so cheap? https://ourworldindata.org/cheap-renewables-growth

[14] Since October 2020, includes all pumps and immersion heating for legionella cycles