I’m writing to usher in the independence of South Sudan on 9th July 2011, when it will formally be declared a nation-state. This follows a referendum on 9th January 2011, in which 98.8% (against 1.7%) of South Sudanese people opted for secession from the north. What does this mean? For me it is my desired outcome to be free not only from socio-economic marginalisation but also from oppression, marking the end of ingrained inequality and second-class citizenship inflicted by successive northern governments since independence in 1956. Casting my ballot on the referendum day in January was a significant milestone in exercising my democratic rights and having my say on the future of Sudan. I prayed that God may make my dream come true. Now it has come true.

A child soldier in the SPLA
Seeking refuge in Ethiopia, my father brought the whole family to a refugee camp in 1985 when I was ten. My father had been a veteran Anya-Nya 1 fighter until the signing of the Addis Ababa Agreement in 1972, after which he became one of those forcefully retired by the northern government; they were called “left-hands”, meaning that they still held anti-north ideas, and were deemed harmful by the Nimeri regime in Khartoum.

In 1988, I moved to a military camp called “Tharpaam” in Itang Refugee Camp in Ethiopia, where nearly 1500 children between 8 and 13 years of age were being trained in preparation for recruitment into the Sudan People’s Liberation Army’s Jiec El Amer (Red Army). We were told that we were brought there to study, but soon realised this was just a pretext; we were nothing more than child soldiers. It didn’t take long for me to become motivated to be an SPLA soldier, though.

Dr John Garang, the SPLA chairman and commander-in-chief of the Sudan People’s Liberation Army/Movement, would lecture on the concept of new Sudan. We stood on parade, dressed in white uniform and cape, singing songs of liberation. We slept in grass-thatched huts, infested with cockroaches and jigger fleas. Diseases like dysentery, malaria, and typhoid were commonplace, with funerals almost every day.

Food was never enough. I was entitled to only 1 kg of white beans and quarter of a litre of oil a month food ration; this lasted only a few days. Many died of hunger and diseases, and the norm was for roommates to bury the dead. I buried seven of my thirty-three roommates, four of whom died of malnutrition and three of dysentery. The army officer reminded us often: “we are starving because of the north. They make us suffer and die…this is the reason why we are fighting them.” Education, the original purpose that brought me to the camp, was never discussed. The priority for the SPLA was to get soldiers to fight. When I asked about school, the officer would say: “you will go to school when we defeat the north.”

This dreadful situation continued until the downfall of the Mengistu Regime in Ethiopia in May 1991, and the subsequent dislodging of SPLA from Ethiopia as well as the splintering of SPLA/M into two. Consequently, all Sudanese refugees fled back into Southern Sudan. Not long after that, I returned to a refugee camp called Dimma in Ethiopia, where I pursued my primary and secondary education until 1996.

My sleepless night in Qadarif
I went to Khartoum in 1997 and enrolled in the University of Juba after completing secondary high school in Ethiopia. Now, with my family scattered by war, my siblings in Ethiopia and parents somewhere in Southern Sudan, hiding from the enemy, I decided to reunite the family. In doing so, I went to Ethiopia in April 2004 to bring my siblings who were living in a refugee camp. Things went well in Ethiopia, but in Sudan my sister was refused a room because sharia law banned hotel accommodation for girls. So my nine-year-old sister and I devastatingly spent the night outside the police station in Al Qadarif, despite hotels having rooms available and the fact that I was carrying enough money to afford a separate room for each of us. No one came to our help. We were like foreigners. Police looked at us with contempt. We lay at the gate, sleepless, until dawn.

Sudan that night became to me a place where the vast majority of citizens had no legal rights while a minority enjoyed unlimited liberty. I hated being Sudanese, preferring living as a refugee in a foreign land to being a second-class citizen without rights and freedoms. That night my sister and I spent outside the gate, chilly like no other, determined the box into which we cast our votes during the referendum early this year. On the voting day, my sister, living in Kenya said: “I can’t forget that sleepless night in Qadarif, brother; so I will vote wisely.”

She confirmed to me afterwards that she had done so; independence is the solution. 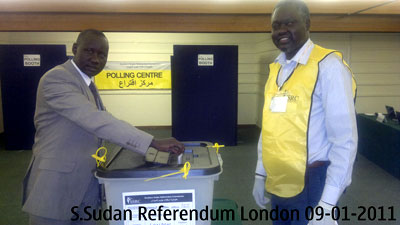 My roles in the Government and reason for studying MPA
Before joining the University of Exeter I have, since 2006, been diligently serving in the Government of Southern Sudan. I work in the Ministry of Parliamentary Affairs, which is given clear mandate to build the capacity of legislatures both at national and subnational levels. The ministry is charged with the responsibility of building and nurturing democratic governance in nascent Southern Sudan.

I also became the Coordinator of government civic voter education programmes, designed and implemented, ahead of general elections in April 2010, to teach the southern populace their citizenship duties, responsibilities, and rights of democratic participation.

In addition, I’ve worked as Assistant editor-in-chief of the government-run newsletter, The Parliamentarian, which is oriented towards educating parliamentarians and government officials on managing legislative affairs and promoting good governance.

However, with prospects of independence and the challenges associated with a new nation-state, I decided to seek opportunities for further studies in Public Administration so that I may contribute even more to the development of an independent South Sudan. Consequently, I gratefully joined the Exeter MPA programme, and must give many thanks to the Foreign and Commonwealth Office (CFO) and Chevening Scholarship Programme for sponsoring my postgraduate studies in the UK. The qualifications and knowledge I have attained will help me make significant impact in Southern Sudan, making me professionally competent in discharging my duties and responsibilities in the civil service, particularly in analysing, formulating, and administering public policies.

Finally, eventual separation from the north is, I believe, the best thing that South Sudanese people have ever attained, though lots of formidable challenges lie ahead of us in our nation-building efforts. These include combating corruption, eradicating tribalism, building the economy, making effective policies in all sectors. South Sudan’s new government will need further policy advice and help establishing its own higher education programmes if we are to achieve our goals: perhaps the University of Exeter will be able to help us on our journey into independence even more in future.