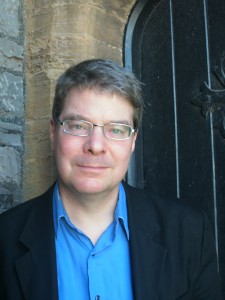 Professor Philip Schwyzer, Professor of Renaissance Literature in the Department of English.

Philip Schwyzer is Professor of Renaissance Literature in the Department of English. His book, Shakespeare and the Remains of Richard III, will be published by Oxford University Press next year. Here he asks how the mystery regarding the fate of Richard’s body may have sparked Shakespeare’s imagination.

Though we still await the results of DNA testing, it’s hard to imagine that the remains found under a carpark in Leicester this summer could belong to anyone other than Richard III. The skeleton is not only in the right place – the choir of the church of the Leicester Greyfriars, where Richard is known to have been buried in 1485 – but, with an arrow embedded in its spine and a massive wound to the cranium, it fits what we know about the king’s death on Bosworth Field. As the near-contemporary Song of the Lady Bessiye reports, “they struck his bascinet [helmet] to his head/ until his brains came out with blood.” Most striking and persuasive of all is the severe spinal curvature which would have given the living body precisely the appearance described by the chronicler John Rous: “small of stature, with a short face and unequal shoulders, the right higher and the left lower.”

The story of the Leicester dig, initiated by members of the Richard III Society, could be mistaken for something from the career of Heinrich Schliemann, if not Indiana Jones. As Richard Buckley, who led the excavation, acknowledges, “in archaeology you aren’t supposed to look for famous people.” Much less do you expect to find them. Yet if the fantastically successful result of the Greyfriars Project seems like something out of a film, it is appropriate to its object. The small man with a short face has always seemed larger than life – even before William Shakespeare got hold of him.

The chronicles Shakespeare would have consulted in writing his play are still among our main sources today for the events following Richard’s death at Bosworth. They describe how Richard’s body was mocked and abused on the battlefield, slung naked on the back of a horse and carried into Leicester. According to Thomas More, the king was “harried on horseback dead, his hair in despite torn and tugged like a cur dog.” As the body was carried over Bow Bridge, its head was reportedly allowed to slam against a protruding stone, fulfilling a prophecy made by an old woman that where his heel struck in the morning, his head should strike that same night.

Richard’s naked and battered body was put on display for two days before receiving burial at the fairly obscure Greyfriars priory. Some ten years later Henry VII’s government made a small payment for the construction of an alabaster tomb (complete with an epitaph in which Richard is made to confess his crimes and express gratitude to Henry for treating his remains so mercifully). When the infamous Cardinal Wolsey died and was buried at another Leicester monastery in 1530, a joke circulated that the city had become “The Tyrant’s Sepulchre.” Not long after this, the Greyfriars was dissolved, and Richard’s body disappeared from the historical record. Different stories soon circulated about its fate, the most famous claiming that his remains had been dug up, dragged through the streets, and thrown in the river Soar. Until the eighteenth century, a medieval sarcophagus said to have contained Richard’s body was on display at a Leicester tavern, where it doubled as a trough.

Shakespeare’s response to the traditions surrounding the fate of Richard’s corpse is enigmatic. Following his death in battle, Richard’s body is left lying on the stage, with no stage direction calling for its removal before the end of the play. Although the victorious Richmond gives directions for the burial of others who have fallen on both sides, nothing is said about Richard. Richmond may ignore his fallen foe, but the audience, typically, cannot. In the recent production starring Kevin Spacey, Richard’s body was winched up by the heels to hang upside down above Richmond’s head as he delivered his final speech. (Even as a lifeless corpse, Richard tends to steal the show.)

Did Shakespeare know the story of Richard’s rude deposition in the river Soar? This might help explain why the play is so stuffed with images of watery burial. In his first soliloquy, Richard declares that “all the clouds that lowered upon our house [are]/ In the deep bosom of the ocean buried.” Later on, his brother Clarence reports a vivid nightmare involving corpses on the ocean bed: “Methought I saw a thousand fearful wrecks;/ Ten thousand men that fishes gnaw’d upon…/ All scatter’d in the bottom of the sea.” The fascination with watery burial which runs throughout Shakespeare’s plays, down to Ariel’s famous “sea-change” song in The Tempest, has its origins in Richard III. Though we can now be fairly certain that Richard’s body was never subjected to this fate, the popularity of the story tells us something about the early modern imagination, its preoccupations and its fears. Perhaps it tells us even more about Shakespeare’s personal nightmares.

While we await the results of DNA tests, discussion is shifting to the future of the Greyfriars remains.  Leicester Cathedral, which already contains a memorial to the fallen king, has staked a strong claim. Some commentators, however, have called for Richard to be interred with full royal honours alongside his relations (and reputed victims) in Westminster Abbey. As a northerner at heart, Richard himself might have preferred burial in York Minster, a cathedral to which he showed much favour in his reign.

Though the discovery of the body is in many ways a cause for wonder and celebration, it has its melancholy aspect. The bones from Greyfriars cannot help but speak to us of mortality, of great suffering, and of wasted dreams. They humanise Richard III, and can make us pity him, even if we still believe him to have been guilty of at least some of the crimes laid at his door. Richard – who in Shakespeare’s play is called a devil, a cacodemon, a dog, hedgehog, and a bloody boar – was a human being after all. And someone made a great hole in his head.

In becoming more human, does Richard become less potent as a symbol? I would argue that the fact that Richard for so long had no known resting place contributed to the potency of his myth; it helped Shakespeare create a character who strikes us as unnervingly present, unfailingly contemporary and terrifyingly alive. Paradoxically, knowing just where Richard is may make him seem less rather than more present, leaving him less free to roam the cultural imagination. Yet Shakespeare’s play, the most frequently performed of all his works, will undoubtedly remain as popular as ever. And there will now be another image of Richard to hold in memory alongside the stage villain – one so much smaller and frailer than Shakespeare’s hunchbacked cacodemon, and so much more real.