Ed and I arrived safely and more importantly so did the specimens. I didn’t arrive until about 23:30 local time, we are 8 hours behind the UK – I think! Tuesday was a ‘get over the flight(s)’ day, I found a river park to walk around with many birds, amazing cacti and some animals as well. Ed explored some of the dealers who are set up in motel rooms around the vicinity of the Convention Centre. 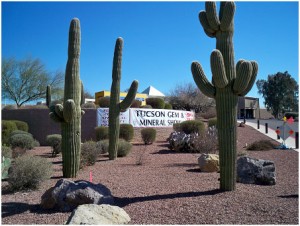 Yesterday was registration and set up day for exhibitors but not until 3.00 pm so Ed took me to see a few of the dealer venues, there must be hundreds of individual dealers here in fact there are so many that I am quite surprised that I even managed to find a room so close to the venue. Some of the material on show by dealers is quite unbelievable, well seen through my eyes, on the other hand there is also a ‘tackier’ end of the market as well. But the majority of the individual dealers we wandered into had the most fantastic wares on display. Highlights for me was from a Columbian dealer with the most beautiful emeralds, numerous tourmalines and some wonderful Spanish sulphides. There were even fibreglass, life size dinosaurs available, some of which were motorised because there was a small stegosaurus with a moving tail! 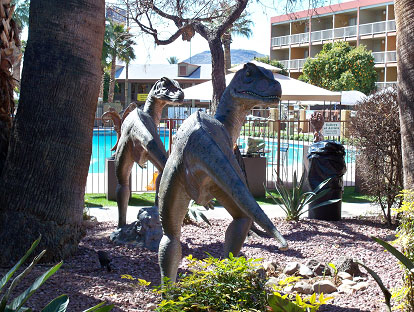 There were also dealers who deal in fossil specimens and some of those were quite spectacular and I would certainly give some of them houseroom!

So onto our set-up, we have prestigious neighbours: the Natural History Musuem (NHM) and the Museum of Scotland. 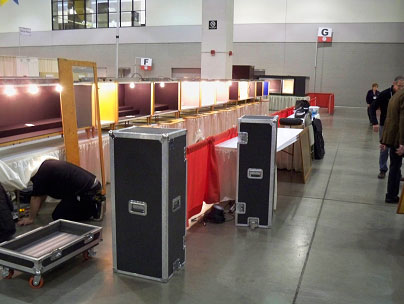 It took us over three hours to set up our case, rather too much time being spent trying to get our banners mounted with the sticky backed velcro that I had taken because the material lining the case wasn’t quite hairy enough! Eventually we managed it with the help of more double sided velcro pads from the NHM.. So by about 6:00 PM we were done, had received aesthetic advice about layout from NHM staff, had window polished the glass front of the cabinet, mounted the front and locked the display. We were done! Now all that remains is to go in this morning and see if everything is as we left it and to await the comments of visitors and dealers. We can then wander around and see what else is on display! 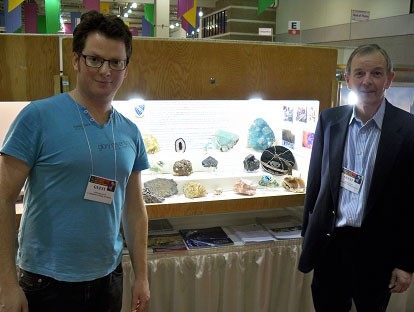 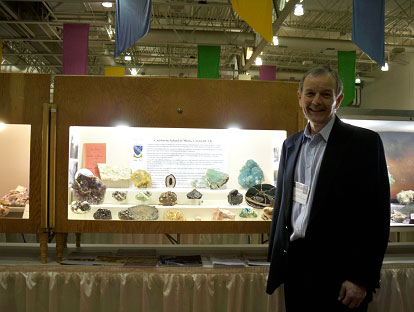 Weather is wonderful, about 70 F yesterday probably getting warmer towards the weekend, no clouds yesterday or today. I have seen more sun in three days than in the last – well I don’t know how long!

Arrived at about 10:15 AM to be greeted by congestion in the car park outside the Convention Centre and visitors queuing to buy tickets, I, as an exhibitor was of course able to breeze straight in and head for our display. 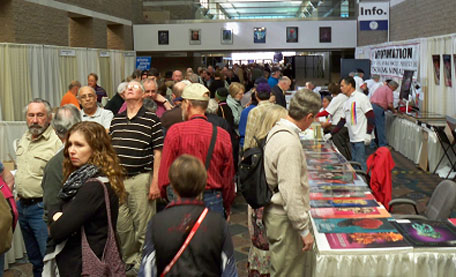 Success! The sticky backed Velcro from the NHM contingent, a heartfelt thank you to them, had worked and our banners had stayed where we had fixed them. 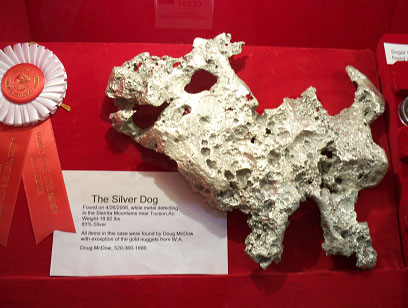 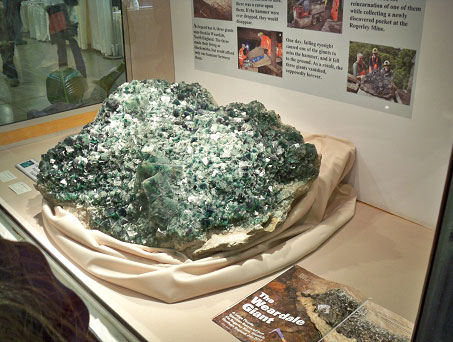 There has been quite a lot of interest in our cabinet from visitors and dealers with an interest in Cornish material. Ed has managed to ensure that our display will be written up in no fewer than three places by talking to contacts and being there at the right time to catch official photographers as they made their way around the Show. The physical impression of the Show is of a massive indoor space, imagine the Stannary at least 5 times longer and 3 times wider, even then I may have underestimated the overall size. There is also a further exhibition area that appears to be set up as a basketball pitch.

Some of the exhibitor displays are quite remarkable with quite stunning specimens. I also spotted a few uranium specimens (torbernite) and a large chrysotile specimen that appeared to be shedding fragments and with a rather loose appearance. I seem to recall that it was from an academic institution and not a private individual. Some of the dealer material is wonderful and there is obviously quite a large volume of material coming out of NW Pakistan and Afghanistan, presumably not collected by westerners! Namibia also seems to figure quite highly as a source of specimens. The most expensive specimen that I have seen so far had a price tag of $275,000 that would buy quite an average sized UK home! Specimens in excess of $10,000 were quite common on the bigger dealer stands. At one stand I was told that overall sales of $1,000,000+ weren’t unexpected. So far everyone I have spoken to has been extremely friendly and interested in why we have come and more importantly whether we are intending to come again in the future.

Yet again the weather has been fantastic.