Two hundred years have passed since Wales laid claim to being the leech farming capital of Europe.

Following the revelation that Swansea’s Biopharm are putting Welsh leech farming firmly back on the map, University of Exeter researcher Dr Alun Withey appeared on BBC Radio Wales to talk about Leeches and medicine. 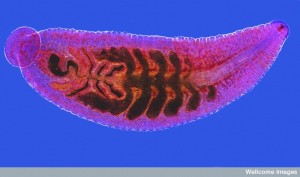 A Welsh company are now the leading producer of medicinal leeches. The company, based near Swansea, produces more than 60,000 leeches for use in hospitals around Britain which, although it pales into insignificance next to the 40 million or so farmed in the 19th century, still represents something of a comeback.

So why have leeches endured in the practice of medicine for over four millennia?

We perhaps most associate leeches with the Tudor and Stuart period and they have, rather unfairly, become associated with quack medicine and ‘olde worlde’ quaintness.

Think of the scene in Blackadder where a physician apologies for one of his leeches who is ‘an absolute hog’. In fact, though, leeches were an important part of the early modern health regimen, as well as being a key tool in the treatment of illness.

Far from being magical or ‘folkloric’ they were actually cutting edge!

Bloodletting was a central part of early modern medicine. To get rid of excess blood (as well as other bodily products!) was to rid the body of potentially harmful substances. One means of doing this was by visiting a barber-surgeon who would open a vein and take a few ounces. The ideal amount would see the patient light-headed and nearly fainting, but not actually unconscious – a state known as syncope! But lancets were potentially dangerous; be careless with the instrument, hit the wrong vein or artery, use a dirty or infected instrument and your patient was in trouble.

Leeches, by contrast, with their 300 tiny teeth, were incredibly effective without much discomfort or danger to the subject. Leeches had the added advantage of simply dropping off when they had gorged themselves, but also left a ‘thank you’ gift in the form of a coagulant that helped to close the wound. Staunching the cut made from a lancet could be difficult, as well as introducing undesirable matter into the open wound.

Neither were leeches a poor man’s treatment – in fact quite the opposite, as they were relatively expensive. Unlike other sorts of medicines, people did not routinely keep their own leeches, and it is rare to see them in remedy collections. Instead they were the domain of the doctor and would be applied under his supervision. In fact, so inextricably linked to medical practice were they that physicians were sometimes even referred to as leeches.

What sorts of treatments were they used for? Apart from taking blood, leeches might also be deployed to suck the pus out of boils!

Depending on the condition being treated they might be applied to various parts of the body – even to eyes. What it felt like to sit in a chair while a leech sucked blood through your pupils is perhaps best not dwelt upon but, in general, people seem to have borne their treatments with stoicism.

One patient from the late 18th century reported that: “This day I have felt such relief from being bled, having amused half a dozen leeches on my forehead yesterday without much effect.”

Because of their strong associations with the 17th century, it might be easy to assume leeches simply disappeared with the advent of new scientific approaches through the eighteenth century. But they didn’t. In fact, if anything, their popularity increased. Indeed, how long they were a part of official medicine is often most surprising.
In the 19th century leeches were ordered in vast numbers by hospitals, including the major London institutions as well as local infirmaries.

The account books of hospitals sometimes include specific entries for leeches, as did the Aberystwyth infirmary in 1836, who ordered 50 shillings’ worth of leeches – a not insubstantial stock!

Even as late as 1896 some hospitals were still ordering in stocks of leeches, and they continued to be used in some parts up until the Second World War.

And now leeches are back…if they ever really went away. Today the value of these amazing little creatures has been recognised across a range of surgical uses. They are, for example, used in microsurgery, especially in preventing necrosis (tissue death) after limb transplant. The substances they inject into the body have also been found to aid blood circulation, helping to increase blood flow to the newly transplanted parts.

After centuries of emphasis upon medical progress, and the ignorance of patients and practitioners in the past, it is interesting to see the ways in which past practices and beliefs are again beginning to find their way into orthodox medicine.

Over the coming years it will be fascinating to see what other remnants of pre-modern medicine make a return to prominence. Let’s hope that purging isn’t among them!

For more stories from the history of medicine and beyond please visit Dr Withey’s blog.