Geography academic Professor Catherine Mitchell discusses the implications that the budget will have for clean energy in this blog post.

Hardly a month has gone by since David Cameron told MPs he believed ‘man-made climate change is one of the most serious threats this country and this world faces’. Yet the Prime Minister’s newly rediscovered climate convictions has already failed their first test – in today’s budget.

One of the few widely trailed measures which occurred today is the freeze to the carbon price floor  at £18 a tonne of CO2 rather than rising, as it was intended to £30/t CO2 by 2020. The carbon floor price – effectively an increasing annual tax on companies burning fossil fuels to generate electricity – was introduced by Osborne in 2011 and came into force in January 2013. The Chancellor said at the time it “re-affirmed” the aim to be “the greenest Government ever.”

By freezing the carbon price floor in George Osborne’s statement, the Chancellor is commending to the House a climate-blind budget that will provide a nice shiny path for coal by giving it a multi-billion pound rebate. 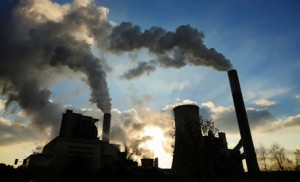 It is easy to point out the flaws of the carbon price floor. For a start, analysts believe a much higher carbon price – of around £40 per tonne of CO2 – would be required before the economics of coal are sufficiently damaged to incentivise a switch away from the dirtiest fuel – the main aim of this policy. It gives a windfall to existing nuclear power plants. And of course the costs of it will be borne by consumers, especially the most energy-intensive industries, whose trade body has lobbied Osborne for a freeze.

For these reasons, reforming or scrapping the measure is not necessarily a bad idea so long as an alternative, more effective, and affordable means of driving low-carbon investment was introduced to stand in its place. However, given Osborne’s announcement does not include the introduction of an alternative policy – it is merely a further extension of the rollback of what the Prime Minister reportedly referred to as “green crap”.

Without further measures the removal of the carbon price floor will have a number of alarming impacts. The first is to vastly improve the economics of coal-fired power generation. Coal is the dirtiest fuel used in electricity generation, releasing twice the amount of carbon as gas when burnt. According to the government’s own independent climate advisers, any credible plan for decarbonising our power supply sees the removal of all unabated coal plants by the mid-2020s at the very latest.

Osborne’s carbon price floor freeze is another unexpected present to the coal industry. Thanks to a combination of high gas prices, low coal prices, and ineffectual carbon price-setting by an impotent Emissions Trading Scheme, coal has recently made an unexpected comeback, becoming the largest source of power generation in the UK last year. However, not only will coal plants not pay a high carbon tax with the frozen carbon price floor but they are going to be further bolstered through the government’s capacity market which is coming into being as a result of Electricity Market Reform. This will provide payments – again paid for by consumers – to deliberately keep existing capacity online. These payments will enable coal generators to upgrade their power plants to meet EU directives on air pollution.  It was always assumed that the coal plants would not be able to find the £100s of millions necessary to upgrade their plants but now, thanks to capacity payments, they may well be able to do so. These coal plants may therefore be able to generate into the late 2020’s and beyond, and given the UK’s legal target for cutting carbon this is a disaster.

A further impact of the freeze will be an additional cost to deploying renewable energy technologies. The government’s scheme for providing support to renewables – the ‘contract for difference’ – essentially tops up the market-price of power to a pre-agreed level. Given the market price of power is driven up by the carbon price floor, freezing it would mean the level of financial support required to make renewable electricity viable is greater. At the moment, something called the Levy Control Framework sets a cap on the amount of money to be spent on renewable electricity. Freezing the carbon price floor will mean that between £120 and £160m a year in 2020 would either be cut from renewable energy support or have to be found from somewhere else. This is another blow to a clean energy sector which is already suffering from a lack of investor confidence, which is largely due to the government’s confusing signals on energy and climate.

Finally, the third major impact of freezing the carbon price floor is to act as a disincentive to investment in new gas generation. The government wants to see a wave of new gas-fired power stations for security reasons and, again, this is to be encouraged by the capacity market payments.  Since freezing the carbon price floor will mean more coal staying on the system in the 2020s, then this lessens the profitability of,  or need for,  new gas plants. A smarter and cheaper way of bringing forward investment in new capacity would be to regulate off our ageing coal plant, and instead use capacity payments for flexible capacity which fits with variable renewable electricity and the goals of our energy policy. This will mean promoting demand side response in our electricity markets, increasing our storage abilities and supporting new gas plants where necessary. This will both cut pollution and bring down the long-term costs of building new, cleaner power stations.

The carbon price floor price is a bad policy. Freezing it is a popular move with heavy industry, but it is very short term thinking. An amendment to stop capacity payments to coal plants was already defeated during the reading of the Energy Bill. That was bad enough. This additional windfall to coal plants really shows what this Coalition care about – and that is not the environment or consumers.