When the enthusiastic TEDx organisers contacted me last year to speak at the TEDx Exeter event in March 2014, I first read the email invite and turned pale with fear but then re-thought and realized that although it seemed like quite a challenge, I couldn’t say no.

The global phenomenon that is TED speaks to millions of people across the world irrespective of background, race or gender. It’s all about “Ideas Worth Spreading” and spread they do. For those not familiar with TED: TED started as a conference in 1984 where Technology, Entertainment and Design converged.

TED and TEDx (local and independently organized TED like events) invite “Thinkers. Doers. Idea-Generators” to deliver talks at TED conferences that anyone can attend and the talks are further posted online and translated into more than 100 languages. No joke TED is a global phenomenon its online presence has challenged the likes of viral videos such as pop hits like “Gangnam Style” with some TED talks being viewed billions of times.

The Guardian summarized TED in 2008 as “Consistently the best thing you can watch on the internet: the TED talks. Brilliant people, in the true sense of the word”. Luckily when I was asked and agreed to give a TEDx talk I hadn’t read the Guardian’s summary else I might have thought twice; stepping up to the mark of “Brilliant people” seems a daunting task.

Over the months the TEDx team prompted me, and prompted me, months before the event “how is your talk going, can we help, can you send us an outline” as I looked at these emails over a mountain of undergraduate marking and still with more imminent undergraduate lectures to prepare, PhD students to supervise and 12 hour working days the weight of TED would lie heavy on my shoulders. Again and again I blocked out weeks in my calendar with the instruction to “prepare TED talk” and sure enough something would come up that wiped out those plans.

By early February however, I was on version 6 of my talk and it was starting to take shape. Finally on 26th February, whilst battling Jet Lag from a scientific meeting in the US and just over a month before TEDx Exeter I constructed what were to be the final slides. These were sent to TEDx a week later (as per the deadline) and the remainder “spare” moments were spent finalizing exactly what I would say.

The week of TEDx loomed and arrived, I instructed my dissertation and PhD students that I was going in to hiding to practice my talk but that I would answer emails to them. So I prepared myself, I rehearsed and rehearsed, I decided I couldn’t do it but then got a cup of tea pulled myself together and began again.

The morning of the dress rehearsal arrived. I hate rehearsal talks, rehearsal interviews, rehearsal anything, it’s not the real thing and I can never get the real energy and often if it goes wrong and it makes you feel worse. My rehearsal was OK, but what it did allow me to do was familiarize myself with the surroundings of the Northcott Theatreand all the technicalities of radio microphones and waiting in the wings to go on. 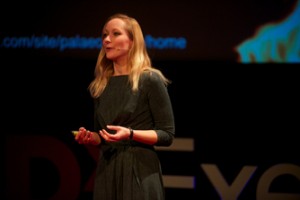 The day arrived, by now I was quiet but calm, my nervous energy used up in the days before. The Northcott theatre was a buzz with excitement and the aura of TED. My talk wasn’t on until the afternoon, so I sat at the back of the theatre enjoying the other talks and trying not to compare how mine might seem in reflection. The talks were thought provoking, every talk gave me a new thought and by lunchtime I realized all those thoughts were beginning to push what I wanted to say out of my mind! So I snuck off for a re-rehearsal and to gather my thoughts. 3.15pm and I was back stage in the dark and being rigged up to the microphone 30 minutes in advance of my talk.

Waiting in the darkened wings transported me back some 14 years where I was standing in pointe shoes and a tutu waiting to go on stage as the sugar plum fairy at my ballet schools annual show. Those black brick walls and darkened wings, with tech support and lighting and people moving around behind the scenes seemed so familiar that I began to feel at home. I’d spent so long back stage while I was growing up that the only oddity was that I didn’t need to do any stretches and there was no musical queue to prompt my entrance. Now however, I had to go on and talk rather than dance. Speaking in public has always held a lot more fear than dancing, dancing comes naturally to me; public speaking does not.

The talk ahead of me finished, I ran through my opening sentence in my head and it was time for me to tread the boards once again, time to come alive and be that person people want to see. It made me think that my many years at stage school paid off, I may not have realized my dreams of becoming a ballerina but they prepared me well for performance and stepping up to the mark in front of an audience. 12 minutes later (10 minutes longer than Dance of the Sugar Plum Fairy) and my time was up and I was done.

I’d told the story of Earth, Air and Fire, I’d talked about how wildfires help maintain the air that we breathe. I haven’t seen my talk yet, TED haven’t released the videos yet from the day, we all await them with baited breath how did we do? The proof will be in the viewing!

I very much doubt that my TEDx talk will go viral on the internet, it is unlikely to rival “Gangnam Style” or perhaps even the new internet trend of watching kitten videos however, if just one person in that audience, which included several school groups is able to say “wow I never knew that about wildfires” and it sparks one persons interest and perhaps another via the internet then that’s how ideas start spreading.

It’s not so much about what I said at TEDx but more about what those few people will now start to think, what there own “Ideas Without Frontiers” will be? Will any of those young people become one of the next great thinkers of our time because I said just a single sentence that inspired them?