Craig Knight is Director of Identity Realization Limited and an Honorary Research Fellow at the University of Exeter.

How would you measure productivity in an accounts office, an HR office or University Admin building? Think for a minute. How would you?

Since Identity Realisation started at the University of Exeter over a decade ago we have established specific metrics that explore well-being, psychological comfort and productivity. As far as we know this is unique.

Our commercial research uses science not heuristic. Impartiality is vital so that we can make informed comments based on evidence. This all may seem obvious written in a university context but when you consider that Mark Dixon (Regus) is one of several senior business leaders on record as saying that he hopes that a measure of productivity will be discovered in his lifetime you may just develop an inkling that it is rule of thumb and precedent — not science — that dominates office design and its management. We are hopefully making some difference.

For example, evidence overwhelmingly suggests that a minimalist, spartan ‘lean’ office is simply bad news on all measures. Lean is currently the ‘go to’ condition for the majority of low-status office workers. No animal thrives in a spartan space for long, be that a caterpillar in a five-year-old’s jam jar or a gorilla in a lifeless zoo. 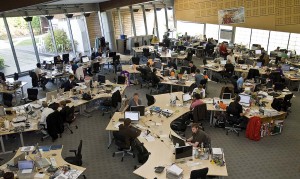 We are no different. Every measure of performance and happiness is depressed in a flat open office where managerial systems and clean desk policies hold sway.
Published data can demonstrate how a rich design template such as those employed at Google or Microsoft has ― over the past ten years at any rate ― always been quantifiably and significantly better than a lean equivalent. However, we can also show that rich, topical design does not provide optimal working conditions.

In short, design does not live up to its promise. Companies spend considerable amounts of money installing slides between floors, planting indoor beer gardens and setting swinging ski gondolas in their canteens, but they really need not bother.
The results are bad news for designers and managers. Human beings are not rational. We prefer being given the freedom to develop our own – to the outside observer – less attractive office to any magnificent space imposed through managerial largesse.

The published evidence indicates that the best offices recognise elements of our own identity; they should not therefore reflect the stamp of the designer or commissioning director. So if we can see a few plants that we chose, a souvenir from our holiday, or a picture that means something to us, then these are the things that create spaces that are more psychologically comfortable than anything a talented designer can create. 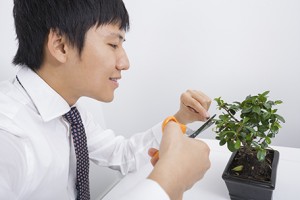 This means that our less than perfect space will outperform the Googleplex just as surely the Googleplex outperforms the stark lean building. As a participant put it very succinctly “Well of course, I mean who wants to live in a bloody show home?”

However, we can do better still. Organisations resolutely believe in imperfect ‘design led office solutions’. Try putting the term into a search engine and check the results. However our latest research does indicate that ‘led design’ will create most interesting results. A more submissive approach to office development is paying early dividend.

This psychological application of design may bash a few egos by putting the designers’ cart behind the organisation’s horse power, namely its people. Yet in so doing we seem to be harnessing the latent talent of the design process. Thus rather than seeing aesthetically pleasing spaces as pleasant milestones passed en route to more effective working environments we are instead finding the benefits of design that have been claimed by its creators but are – as yet — unrealised.

And in closing, here is one final nugget. The Psychology Department has worked extensively with older adults in care. In the same way that better respected office workers operate in more considered workspace designed by others, so older adults live in attractively designed spaces over which they too have had little control.

We gave older adults the power to develop at least part of their own living spaces. As a consequence they not only felt better and identified more with the home and its residents, but their cognitive engagement scores increased by 19 per cent. That is they performed 19% better on intelligence tests. They were 19 per cent cleverer. It seems only right to take this work back into the workspace.

We are running a study at Clerkenwell Design Week (20th to 22nd May) where we will look to roll these factors together to see whether the psychological application of design has the potential to increase cognitive performance at work. Currently a smart space is simply one that squeezes eight people into a space originally developed for twelve; but what if it were possible to develop a space that makes people perform at a higher cognitive level; a space where they are effectively cleverer as well as happier and more productive? The initial signs are very promising. We’ll let you know.