The new £27.5million RILD building opened this week. The building will provide new space for world-class medical research and teaching. Katy Barwick, a PhD student in the University of Exeter Medical School, attended the opening. She works with the Neurogenetics and Community Genetics research group under the supervsision of Professor Andrew Crosby and Dr Lorna Harries. Here she gives her perspective on the launch event.

An eclectic group of 180 guests, including delegates from the Wellcome Trust and Wolfson Foundation, Exeter council members, major partners and University representatives and many more attended the launch of the RILD centre on Monday 2 June 2014.

Whilst VIPs received a private tour of the clinical research facility and laboratories during which they could witness the already well-functioning building in operation, guests were greeted with welcome drinks and canapés in the café and reception area. This was followed by inspiring and enthusiastic speeches by Professor Sir Steve Smith, Vice—Chancellor and Chief Executive of the University of Exeter, and Angela Pedder, Chief Executive of the Royal Devon and Exeter NHS Foundation Trust, both of whom expressed their pride over the success of the facility so far, and their confidence in the potential of this multidisciplinary, collaborative work place to tackle tomorrows healthcare problems by putting the quality of patient care at the centre of research.

There was clearly a dream shared between those who have worked to create the RILD, and that is to provide an excellent facility which enables students, researchers, and NHS and University staff to come together to be trained and educated, apply knowledge in innovative ways, and work as one to improve treatment and quality of patient care. A dream which, as student who has been working at the RILD for the short time it has been operational, I can see has become a reality even in these early days.

Despite the commitment, drive and vision of all those from the University of Exeter and the Royal Devon and Exeter NHS Foundation Trust that has been fundamental in the creation of the RILD, the development of the award winning £27.5million building would not have been possible without the generous part-funding that has come from The Wellcome Trust and The Wolfson Foundation. Thus, Dr Jeremy Farrar, the director of the Wellcome Trust, and Sir David Weatherall, a Wolfson Foundation trustee carried out the joint unveiling of The Wellcome/Wolfson philanthropy plaque.

We were also honoured to have Dr Dennis Gillings, CBE, Hon DSc- the founder of the largest global provider of clinical trials and commercial marketing services to the pharma and biotechnology industry, Quintiles – as the keynote speaker and unveiler of RILD building plaque. 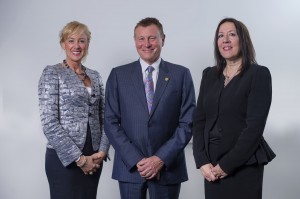 Dr Gillings’ showed great optimism and belief in the future of the RILD, describing the facility as ‘epitomising the need for multidisciplinary interactive research’ and as a development that will ‘put both Exeter and the South West on the map, and expand the national contribution from this region’. He described the health care world as ‘evolving towards personalised, stratified, precision medicine and an explosion of health data’, and the launch of the RILD as a ‘milestone event for Exeter creating its opportunity to be a major player in this new healthcare world’. He stated that ‘Exeter is doing the right thing at the right time’, and that the investment made in the RILD is ‘expanding local infrastructure’, and ‘will help the NHS transform itself into 21st century medicine’.

During the final part of the afternoon, guests were able to wonder around the building both to see the facilities, and to speak with staff about the clinical and laboratory research. As a researcher at the RILD, I found this to be a great opportunity to share our current research and show to the guests how much more the RILD is than a building, but a facility which provides an excellent working environment where communication between teams of the same and of different disciplines, and with patients, flows easily and effectively. Their interest and enthusiasm in our work was flattering and rewarding.

In all, the RILD launch day was a successful event which generated an atmosphere of enthusiasm and excitement about the future of Exeter’s role in forwarding excellence in research and patient care. I believe the event was enjoyed by all, and that its’ success is an example of the future success of both the RILD and Exeter.