University of Exeter Business School student team Vanguard took their social networking app ‘Ripple’  to the Microsoft Imagine Cup world final in Seattle. Ripple’s Co-founder Guillaume de Boisséson has written a blog to give us all the backstage information about competing on a global scale.

It is always amusing to see how little things, once considered of no importance, can turn a life towards a radically different way. When Mikky Adedeji sent me: “Do you want to do this Microsoft thing?” I was walking around campus. Probably wondering about the way I would balance revisions for my exams and fun, I was opting for an afternoon under the sun. After all, we were first years and statistics lectures could still wait.

The ‘Microsoft thing’ in question is the Imagine Cup, the biggest student competition in the world. Every team must invent something with a Microsoft technology.

Then I received: “Meet us at 4pm in the Forum.” It was three.  This was upsetting my new plans in a very unpleasant way. I went anyway.

One month later and against all odds, we were the Microsoft Imagine Cup UK winners. What are the chances of three first year business students with a one-month project against mostly third year computer science students with twelve-months projects in a tech competition?

We created a location based social network called Ripple. We want to link users to their direct environment by allowing them to share and receive texts and images in a chosen range around them. Using Ripple allows users to know what is happening around them, to seize opportunities and meet new people. When you walk around your university campus, Ripple could help you know about Google’s presentation on employability skills or get vouchers for the next night out, according to your interests. 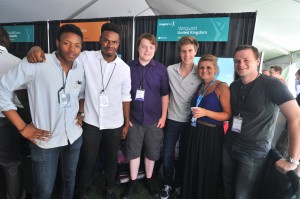 The excitement we felt was however shadowed by two major issues. Femi Awomosu and Mikky had full time jobs in different cities at Google and Seven Energy. Working exclusively on Skype, late at night and during hours was our new life. We worked hundreds of hours and got to the world final as prepared as a three month old project can be. The second issue was that we were business students, with no developing skills, in a tech competition. That’s why we hired Daniel Brown to work on the project for three months.

In Seattle, everything is excitement and full of energy. ‘Awesome,’ is the most used word and is often reinforced by the adverb ‘super,’ to create the very dense ‘super awesome’.  Days were spent going from amazing breakdancing shows to interviews, briefings, pictures and pitch preparation with the last 30 out of 500,000 participants.

The panel of judges included the human-computing design legend Bill Buxton, the technology reporter Mary Jo Foley; Microsoft Ventures head Rahul Sood and others. A pitch is 10 minutes long and we can easily count five hours of work for every minute. 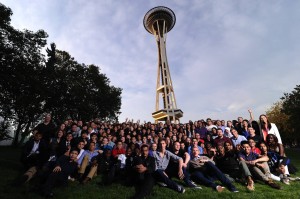 Right after the pitch, we received an email about a private meeting with Steven Guggenheimmer – corporate vice president of Microsoft’s Developer & Platform Evangelism (DPE) group. We had the strict order to be on time, and we were. After being briefed about the way the meeting was going to happen, we followed the secretary inside the office. There were two rooms; a living room and what seemed like a big empty space with a desk at the back. Between huge coaches, desks, a huge TV with an Xbox, servers, this room was the perfect playground, finding an amazing balance between the efficiency business requires and a playroom.

Steven was on the phone for a short moment. He had a weird green and white can only Americans drink in one hand and the latest Nokia Lumnia 1520 in the other. Femi started our elevator pitch and Steven stopped him after the first sentence: “I know what you do, I read it. What’s your business plan?”

We were surprised by so much efficiency, but started answering. Every time he understood, he stopped us by saying: “Ok, I get it,” commented shortly and went on with the next question. “What’s your market?” How do you reach it? How do you make money?”

Once we answered everything, he simply added: “And one last thing: where did you find the French guy?” We talked for about ten to fifteen intense minutes. We had to go back to the showcase in which we were pitching our project to Microsoft employees and the press.

The next day was the ceremony. It was the week’s most impressive event. We entered by the back of the room, applauded by 5,000 people, filmed by the press and dazzled by big projectors pointed at us. We managed to be in the first row, in front of the stage. Next to my seat was a line of empty chairs with a paper on them: “Reserved for Satya, Guggs, Alexey and Brad” (As in Satya Nadella, CEO of Microsoft; Steven Guggenheimmer, Corporate Vice President and Chief Evangelist; Alexey Pajitnov, inventor of Tetris and Brad Smith, Executive Vice President and General Counsel.) I think we picked the right places.

The three first places were not for us this time but we believe in Ripple and decided to go on with this app.

Don’t worry, you will hear from us, soon!