Here, in a Q and A with the charity, she outlines her work and explains why she is dedicating her career to advancing knowledge on the condition.

Find out more about how the new research partnership will tackle dementia.

Why did you decide to become a dementia researcher?

Since a young age I have always been fascinated by science, and wanted to become an academic scientist. Dementia is an illness very close to my heart; both of my grandmothers sadly died with dementia. The first of my grandmothers, Mary, first developed symptoms of Lewy Body Dementia about 15 years ago, and watching her change from a fun-loving lady, who was the centre of every party, into a shadow of her former self was incredibly hard for all the family. When my other grandmother, Joan, developed vascular dementia in more recent years, we knew what changes to expect, but it was still very hard to see her kind personality change. My hope is that ultimately the work we do every day as dementia researchers will one day mean that other people won’t see their grandparents lost to this devastating illness.

How will the new South West Network change your research and research in the area?

The new South West Centre will significantly enhance research capacity across Devon and Cornwall. The centre will provide a platform for new collaborations within Exeter and Plymouth, as well as allowing us to easily interact with researchers at the other 14 Network centres across the UK. This support from Alzheimer’s Research UK will also foster the next generation of dementia researchers too; postgraduate students will be able to now attend conferences with centre support, which they may not have otherwise been able to do. Finally, given the age demographic within the South West, the establishment of this new network centre will allow researchers to interact and work together with members of the public affected by dementia at our annual meeting. I believe as researchers, seeing and understanding the impact of dementia within the community we live in is incredibly important. 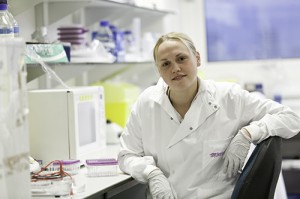 What has been the highlight of your career?

I work in a very new research field called “Dementia Epigenetics”. To put this in context, every cell in your body has the same genetic code contained within its DNA, yet a heart cell behaves and looks very different to a nerve cell for example, as certain genes are switched on and certain genes switched off in different cell types, which is known as “epigenetic” regulation. Epigenetic changes are thought to be one mechanism through which environmental factors, such as diet, exercise and smoking for example, can lead to disease. I am very proud that we recently published the first studies showing that very striking and consistent epigenetic changes occur in Alzheimer’s disease, particularly in regions of the brain that are involved in learning and memory. Off the back of this work I have some funding from a number of Alzheimer’s charities, including Alzheimer’s Research UK, Alzheimer’s Association (US) and the Bristol-based Alzheimer’s charity BRACE to explore these changes in more detail.

What do you think needs to be done to increase the number of dementia researchers in the UK (currently outnumbered by cancer researcher 6:1)?

One of the biggest hurdles is the significant imbalance in funding available to dementia researchers, compared to those working in cancer, with twelve-times as much funding for cancer research compared to dementia. With a limited pool of funds available, many excellent research projects often cannot be funded. As an early career researcher, you are often competing with established investigators for the same pot of money. With greater funding from government for dementia research and with more early-career focussed schemes, it would encourage more excellent young researchers to pursue a career in dementia research.

What do you think are the barriers for people pursuing academic careers?

As a researcher, after completing your postgraduate (PhD) studies, you often spend up to ten years as a postdoctoral scientist. These jobs are rarely permanent, and you work on fixed-term contracts ranging from a couple of months to a number of years. After each contract, you often end up moving to a new university, in a different city, and perhaps even a different country. It is hard for scientists to put down roots during this postdoctoral period, and given that the academic career path represents a pyramid, with significantly fewer positions at each level along the pathway, unsurprisingly many excellent scientists leave academia to take up permanent positions outside of the sector before reaching a tenured post.

The gender imbalance in science is often very striking, especially when it comes to the numbers of female professors. What do you think can be done to address this? Do you have any views on getting more girls into STEM subjects in the first place?

The prospect of many years on fixed-term contracts could discourage many women with children from pursuing an academic career. The Athena SWAN charter aims to encourage more women into STEM disciplines. It is incredibly encouraging for research in the South West that Exeter has been awarded a silver institutional award for addressing gender imbalances, and has working groups tasked with maintaining this progress. Within the University, flexible working patterns, and adapted targets to account for career breaks are positive steps for addressing these imbalances for the next generation of scientists.