Wednesday 1 October is International Day of Older Persons; to celebrate, we have a blog from Dr Cassandra Phoenix on the demographic change in our communities and how the older people taking part in her research are embracing retirement, using it to explore new hobbies and pursue new activities.

Dr Phoenix is a researcher at the University of Exeter Medical School and European Centre of Environment and Human Health. She specialises in understanding how people maintain good health and wellbeing as they age, in her latest research has considered how physical activity can affect the ageing process – and how people feel about it.

We live in a society that is undergoing a dramatic demographic change. As 11 million post-war baby boomers march towards retirement, more than one in six people in the UK are aged over 65. In less than thirty years it will be one in four.

Combined with changes in social convention, such as smaller families and couples having children later in life, we’re experiencing a significant shift in the makeup of our communities.

Like much of the population, older adults often live inactive lifestyles and this can have a detrimental effect on both their health and wellbeing. Add to this a swathe of negative stereotypes about what can and can’t be done in older age – and the use of words like ‘burden’ and ‘care crisis’ – and older people could be forgiven for thinking they’ve already been condemned to the scrap heap.

As we increasingly see growing older as something to fear rather than embrace, we’re confronted with a period in our lives that’s stigmatised as a time to shut down and disengage. Commonly perceived as relics of a bygone age, older people are often viewed as being immobilised by frailty – out of touch and all too often, out of sight.

Yet the stories and experiences of many older people do not conform to these antiquated and outmoded stereotypes. They view retirement as an opportunity to explore new hobbies, activities and relationships, and could offer the key to helping us all age in a positive and active way.

Over the last two years our research team, based at the University of Exeter Medical School, has followed a group of active older adults as part of the Moving Stories project. We’ve talked to them about their pastimes, sports and hobbies, taken photos of them in action, and asked others what they think about their lifestyles and stories. 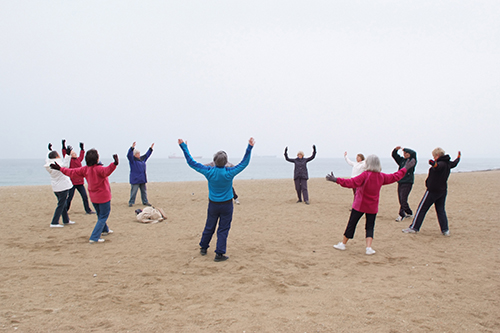 We’re hoping that by listening to their accounts of ‘moving’, we can understand how and why they’ve been able to deal with the challenges of growing older and being active that everyone faces. We also want to know what role all types of physical activity, rather than just exercise, can play in ageing well.

An incredibly broad range of people from across Cornwall signed up to take part and share their stories with us – from sea swimmers, dancers and golfers, to cyclists, walkers, bowls  and badminton players. Our participants ranged in age from a positively youthful 60 to a spritely 92 and continuously conveyed their enthusiasm and desire to remain fit and active.

We’re still analysing the huge amounts of data we’ve captured, but one theme has already emerged across the majority of people we spoke to and that’s the experience of pleasure.

The importance of pleasure is under-researched in health-related areas, particularly in relation to physical activity in older age. Pleasure can take many forms but in this context we’re talking about feelings that make a person feel good, including happiness, joy, fun, and tranquillity.

Many of our participants described so-called ‘sensual’ pleasures – such as the feeling of the wind in their hair when walking outdoors, and the gliding and floating sensations of swimming through the ocean or a pool. These types of experiences show signs of the human senses connecting people with their environment and providing feelings that help contribute to happiness and wellbeing.

We found that people also drew pleasure from documenting their experiences. Whether it was through keeping a diary or writing articles for community magazines, our participants felt a sense of pleasure long after the activity had taken place. So it looks as though it’s not just the activity itself that can give pleasure, but what happens before and after. We think this might be a really important mechanism for expanding the appeal of taking part in some form of activity, particularly in those for whom exercise alone does not appeal.

Perhaps somewhat unexpectedly, the active older people in our study also described the pleasure they derived from simply having a routine. The habitual nature of some of their activities gave them a structure that, in the absence of work, was very welcome. They also described the joy that intense focus can bring, enabling them to escape from – and gain perspective on – issues that demand attention in their everyday lives. This immersion in their activity served an important purpose and several participants reported an improved sense of wellbeing as a result.

So the experience of pleasure seems like an important factor in how and why people stay active. It’s also giving us an important insight into how we measure the impact of physical activity, showing that being active is about much more than just meeting recommended guidelines and preventing or managing illness.

Through the help of our participants we’re starting to uncover the other ways in which physical activity might enable us to ‘move’ through life (and later life in particular) in a positive and pleasurable way. We’re hoping that our findings will go on to influence the way that people are encouraged and empowered to stay active and we’re working with AgeUK and Cornwall Sports Partnership to help this happen.

If you’d like to find out more about our research, we’ve teamed up with TheatreScience to bring this project to life on stage. The play ‘Moving Stories – Moving On’ has been inspired by interviews with our participants and tells stories from their lives with a focus on their attitudes to health, wellbeing and ageing. The opening performance is free and takes place in Truro on 2 October 2014. More information can be found at www.ecehh.org/events/moving-stories-theatre.