Dr Martin Elliott from EDF Energy discusses the electric vehicles’ rise in popularity, the different types of vehicle available and what the future holds for  their popularity.

This blog post first appeared on Climate & Us– a collaboration between University of Exeter, Met Office and EDF Energy that provides a place to talk about the challenges and opportunities presented by climate change.

We take a look at some exciting developments in electric vehicles, and whether they can really offer a sustainable long-term alternative to the petrol/diesel ones.

You’ve been working on electric vehicles (EVs) for a few years now. How do progress and innovation compare to the expectations you had when you started?

When I joined the team about three years ago, despite being a keen car enthusiast, I didn’t know much about electric vehicles. The thing that struck me straight away was how good they are to drive. They use regenerative braking, which harnesses energy that would otherwise be lost and uses it to increase the range of the car. It is really impressive, and together with the instant power from the electric motor, it adds to the pleasurable and relaxed driving feel.

From driving early prototype vehicles such as the MINI E back in 2012, I have seen how rapidly the technology has progressed since then. The latest production vehicles are refined, practical and desirable. Advances in battery technology and the use of heating and cooling systems on the cars has increased the efficiency of the vehicles and extended the driving range. You can also now charge them quicker and connect remotely through smart technology to switch the charging on or off and pre heat or cool the car before you even go out to the vehicle.

What have been the main triggers for progress in that area?

As more manufacturers begin to look at electric technology it increases the number of people working in this field. This increases the knowledge and skills base and also brings down the costs associated with their development and production as the products become more mass market rather than low volume niches.

Investment funding from the government in schemes relating to low carbon vehicle technology, vehicle purchase subsidies and charging infrastructure grants have all helped play a part.

Carbon emission reduction from transport is a key topic on the agenda around the world and more time and money is being spent on it. We are seeing multinational collaboration into research and development to share the knowledge and spread the cost.

Sales of electric cars are booming – registrations have more than doubled in the first half of 2014. Could you talk us through the different types of car available?

It is really encouraging to see the figures about booming sales, and even more encouraging to actually see the vehicles on the road. Driving home yesterday I saw four on my journey from Brighton to London, and that’s not including the one I was driving!

I purchased a Nissan Leaf earlier this year as my own personal car. The Leaf is a full battery EV which means that there is no petrol/diesel engine on board, and it can only be fuelled with electricity.

For those people that may need to go a little further from time to time, a range-extender may be more suitable. This type of vehicle has a petrol or diesel powered generator on board that produces more electricity to propel the vehicle until such time that it can be plugged in again.

A third type of electric vehicle is a plug-in hybrid. This type can be powered by electricity obtained by plugging into the mains, or powered by a petrol/diesel engine when the electricity has run out. They typically have a lower ‘electric only’ range than the range-extender, and the other main difference is that the petrol/diesel engine propels the vehicle when running, whereas the range-extender is always propelled by the electric motor.

Can you see electric cars ever becoming mainstream? Or do you think the future lies with other fuels?

I believe that the future of transport will be a mixture of technologies. This will certainly include electric power but it won’t be the sole fuel, and I see thing such as hydrogen also playing a part.

Electric cars are at a stage now when they are starting to become more mainstream. They are now being put together with petrol and diesel vehicles in showrooms and motor show stands, rather than being singled out as something different.

Public recognition and acceptance is also growing and I think over the next couple of years people will start to give serious consideration to them when making a new vehicle purchase decision. 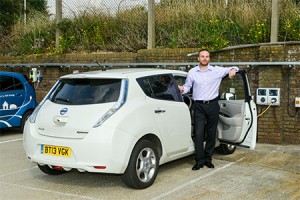 What do you think will be the single most important thing needed for that to happen?

The single most important thing that I believe will increase EV sales is purchase price reduction. At the moment they are more expensive than an equivalent petrol/diesel and this really puts a lot of people off. Over the whole life of a vehicle an EV can be a lot cheaper than running a combustion engine (cheaper to fuel, no road tax, no congestion charge, lower maintenance, less BIK tax for company car drivers) but people don’t realise that and only see the higher purchase price.

However, things are starting to change on that front and a really significant milestone has been achieved recently by Mitsubishi. They have priced their new Outlander plug-in hybrid at the same price as the diesel equivalent. As a result they are seeing record sales and hopefully this could be the catalyst for other manufacturers to follow suit.

How much pressure would a wholesale adoption of electric vehicles (and the building of the necessary charging network) put on the UK electricity grid? And how much carbon savings would it actually deliver?

The ideal scenario for owning a plug-in vehicle is being able to charge it at home (for the public) or at a work location (for businesses). This way the recharging can be done overnight when there is spare capacity on the grid and generally cheaper tariff prices for using it.

Public charging such as on streets and in car parks is a good tool to give reassurance to people that they could top up while out if needed. However, research figures show that by far the majority of charging is done at home and work.

Overall carbon savings and ability to provide energy rely on a low carbon grid mix and it’s vital that the energy supplies around the world are decarbonised as much as possible to realise the benefits of electric vehicles.

You’ve been working with manufacturers, and organising quite a few test drives around EDF Energy’s offices, giving employees the opportunity to try the cars for themselves. What’s the reaction like on the whole?

Reaction to these events has been fantastic. The test drive slots were all snapped up within 24 hours of being announced and interest on the day at the sites has been great. We’ve seen crowds of people looking at the cars, asking questions, sitting in them and taking photographs. It’s been really nice for me to introduce electric vehicles to a new audience and to talk directly with people to dispel any misconceptions they may have. I have also had a couple of people say to me that they would now seriously consider an EV when buying a new car, whereas before the event they wouldn’t have.

And finally, what do you think is the most exciting electric vehicle right now?

There are two cars that I see as exciting developments and possible game changers in the EV market. Firstly is the BMW i8 sports car which has just been launched. This is one of the best looking cars around and coupled with the incredible driving performance, is providing an inspirational halo car for plug-ins.

Secondly is the Tesla Model 3 which is currently still in development. With this car Tesla are aiming to bring performance and prestige at a lower price. The product pricing is being targeted at the executive car sector of the market and could lead to rapid growth of electric vehicles amongst this high volume sales area.