World Diabetes Day is an initiative designed to engage millions of people world-wide in diabetes advocacy and awareness raising. It was created in 1991 as a joint venture between the World Health Organization (WHO) and the International Diabetes Federation (IDF), and it became an official United Nations Day in 2007.

Dr Martin Moore, an Associate Research Fellow in the Centre for Medical History, discusses the preliminary work on the history of diets in diabetes management emerging from Professor Mark Jackson’s Wellcome Trust Award ‘Lifestyle, health and disease: the concept of balance in modern medicine’.

The theme for this year’s World Diabetes Day is “Healthy Living and Diabetes”. As many patient organisations and medical professionals stress, a key part of maintaining a health lifestyle for individuals with diabetes (and their families) is keeping to a good diet. It is a principle which, as my research into dietary therapy in the twentieth century is beginning to show me, has been a mainstay of diabetes care for well over a hundred years.

However, whilst the principle has stayed strong, the meaning of the terms “good” and “diet” in relation to diabetes care have changed over time, and according to some current medical academics they are still very uncertain. During the twentieth century, for example, many prominent doctors initially believed that a calorie-controlled and restricted carbohydrate diet would offer patients the best chance of relieving their symptoms and living longer lives. Following such a diet, though, required careful calculation of nutritional intake and weighing foods at every opportunity. By the 1930s, some doctors were beginning to throw off these shackles and recommend patients consume high carbohydrate diets – a move contested through the mid-century – whilst by the 1970s and 1980s a growing interest had developed around the benefits to patients of increasing intake of fibre and decreasing dietary fat. By the 1990s, doctors and patient had begun to reject special diets as they had special diabetic foodstuffs, and patient bodies instead recommended people with diabetes consume the “balanced” diets that had been recommended for the general population. Indeed, the pace of such changes had led one prominent journal to ask at the beginning of the 1980s: “Diabetes and diet. All is confusion. Or is it?”

Now, whilst it might be tempting to see this history of diet in diabetes over the past century as reflecting some form of scientific progress, there were innumerable social, cultural and economic influences shaping both practitioner and patient engagement with diet during this period.

Taking the clinical side first, it should be said that practice was undoubtedly influenced by doubts over the appropriateness and weight of evidence-bases provided from both laboratory and clinic over the century. Particularly between the 1930s and 1980s, persistent doubts about whether the control of blood sugar levels would improve long-term health meant that some doctors avoided the tight control of carbohydrates and diet that others prescribed.

Yet, even medical publications in favour of controlled diets during these years indicated that the rate at which patients rejected strict instructions – and the practical difficulties involved in life-long calculation, weighing and recording of food intake – exerted influence on dietary prescriptions over this period. Whereas physicians in early clinics admitted to subjecting patients “convicted of dietary indiscretions” to “scoldings” and “rat[ings] in front of their fellow patients”, a more sympathetic approach to diet had emerged by the 1950s. And such an easing of restrictions reflected, in the words of one clinical team, an emergent understanding of long-term treatment as a social challenge: “diabetes is a chronic disease, at present incurable, and to minimise the hardships the fewer restrictions imposed on the patient’s daily life the better”.  This meant that clinicians often simply advised patients to avoid added sugar and sweets, and to judge their food intake by hand and eye. These were suggestions that also likely related to clinicians’ own lack of confidence in calculating appropriate diets.

For patients, moreover, there were innumerable reasons why so few stuck rigidly to dietary prescription for their whole lives, with their efforts – whether successful or not – being influenced by a range of structural and personal factors. The contributions to a recent oral history programme, for example, contain examples of how restricted income influenced the foods to which patients had access, and have underlined the important influence that familial, and particularly marital, relationships exerted on dietary consumption across the century. Equally, these stories highlight the importance of working patterns and access to encouraging medical staff in the shaping of dietary “choices”. Far from the history of diet being a story of science alone, therefore, different views emerge when considering diet in line with practice, and in light of the numerous cultural, economic and social nexuses within which our relationships with food are shaped. 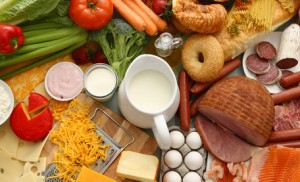 In fact, perhaps one of the most intriguing “findings” of my early research, at least from a personal perspective, concerns how a diagnosis of diabetes could affect family members in divergent ways. Certainly in the first three quarters of the century, contemporary publications suggest that diagnoses may have been gendered in that they had greater – or at least differential – effects on wives of patients than on husbands of patients in terms of dietary routines. Medical professionals, for instance, recall how they would target wives of male patients with advice, but as of yet I have come across no similar references for husbands of female patients. Or as one medical team put it in the 1970s:

At this stage the patients may sometimes say “But I already had a diet sheet and it didn’t work doctor.” It is explained that most seriously overweight people need continuing dietetic supervision at least for a period and that if they are male patients it is most important that their wives are also conversant with their recommended dietary regime. It usually turns out that they are equally in need of it!

Here, then, it seems that differentially divided labour in the household (or at least presumed differences) during these decades resulting in women being both unevenly targeted with advice, and potentially subject to changes in everyday dietary practices, even when they themselves had not been diagnosed. Moreover, whether or not the discussion with husbands of patients in these cases were simply hidden from publication, such testimony also indicates how medical discourse about diet itself has long been influenced by contemporary cultural and social structures.

Given the nascent stage of my research, then, I am hesitant to conclude with any specific “lessons” of my historical work for the present. (And such a utilitarian view of history itself raises issues about the role of the historian and the risks undermining the contextualised sensibility required to make sense of the past). However, at a rather general level I think a suitable take home message would be that understanding how we interact with food and diet can be greatly enhanced when considered through the lens of social and cultural contexts of consumption and preparation. And in time, I would hope that such perspectives will be able to contribute to addressing the growing dietary imbalances of the present.