Professor Adam Zeman and Dr Tim Malone organised the recent Waking up to Sleep Conference at the University of Exeter Medical School. The event considered the science and medicine of sleep and its disorders, from sleep mechanisms to narcolepsy, insomnia and sleepwalking. Here Professor Zeman looks back over the conference… 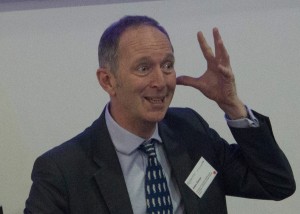 Professor Zeman speaking at the Waking up to Sleep conference.

‘Half our days we passe in the shadow of the earth and the brother of death exacteth one third part of our lives,’ wrote Sir Thomas Browne, On Dreams.

Yet despite the importance of sleep in our lives, the intrinsic interest of sleep disorders and the scope for effective treatments, sleep medicine remains an underdeveloped area in British Medicine. Medical students are seldom taught about sleep in any depth, sleep clinics are a rarity and patients often find themselves researching their sleep disorders outside the medical system.

Over the past couple of years we (Tim Malone and Adam Zeman) have organised a day of sleep education in Exeter as a joint initiative between the Royal Devon and Exeter Foundation Trust and the University of Exeter Medical School. The day has had two main aims – to provide a brief but reasonably comprehensive introduction to the biology of sleep and its disorders, and to bring together people providing sleep services or involved in sleep research in the peninsula.
Sleep disorders can be classified into three main groups, those involving:

The meeting surveyed all three.

Tom Whitehead, a respiratory physician, gave a highly informative and entertaining talk on obstructive sleep apnoea (OSA), the most common – and wonderfully treatable cause – of pathological sleepiness in adults. Tom’s video demonstration turned out to consist of a very audible enactment of OSA on the lecture theatre floor.

Adam Zeman, a neurologist, spoke on the neurological causes of sleepiness, aided by a patient with narcolepsy who generously agreed to tell her story to the audience: narcolepsy is one of the most distinctive disorders in medicine with its excessive sleepiness, prolific dreaming and ‘cataplexy’, loss of muscle tone on emotional arousal, and especially during laughter. Like OSA it can usually be treated very effectively.

Zenobia Zaiwalla, a sleep physician in Oxford, spoke on the parasomnias, which range from the ‘slow wave sleep arousal disorders’, such as sleepwalking and night terrors to the dream enactment seen in REM Sleep Behaviour Disorder. These must be distinguished from behaviours due to nocturnal epilepsy. Zenobia showed some memorable illustrative videos, this time on screen. Exeter is fortunate to have a trained specialist in cognitive behaviour therapy for insomnia, Stephanie Romiszewski – CBTi is the evidence-based and NICE-recommended therapy for chronic insomnia: Stephanie has recently completed a successful pilot study of CBTi at the RD&E: we are hoping that this will become a regular service.

The structure of sleep changes radically through the lifetime, and so do its disorders. Rachel Howells, a paediatrician, outline the developing features of sleep during the first year of life, the pros and cons of rival strategies for dealing with a sleepless baby and current understanding of the tragedy of sudden infant death syndrome. At the other extreme of life, Joe Butchart, an old age physician and memory clinic consultant, discussed the importance of sleep in memory and the complex interactions between sleep and dementia: sleep disturbance is both exhausting to carers and detrimental to the precarious cognition of patients with dementia.

We must now decide whether this meeting should be an annual or just an occasional event. Either way, we think Sir Thomas Browne would probably approve.

Check back tomorrow for a GPs view of the conference from Dr Bill Vennells of Devon Doctors.