The votes have been cast and the results are in.

As we reflect on the results of last week’s General Election, Professor Susan Banducci and her colleagues from VoteAdvice* have been thinking about how engaged the under 25, youth, voters have been with the electoral process.

Voters in Britain had more options than ever this election – smaller parties are a significant part of the electoral landscape.

This might have been particularly confusing for first time voters and younger voters who do not have strong party attachments. In order to help voters understand the positions of parties, they had the option to turn to social media for help. Because young citizens are more likely to get their news, engage in political discussions and try to persuade others via social media, it is thought to be a particularly useful way for this group of voters to become informed.  One way in which they are becoming informed is via the use of Voting Advice Applications (VAA). There are over 10 sites available for voters to help them decide who to vote for in the upcoming British elections such as UK Electoral Compass and TickBox.  Some of these sites had over 1 million users who were trying to find out which parties most closely matched their policy preferences. 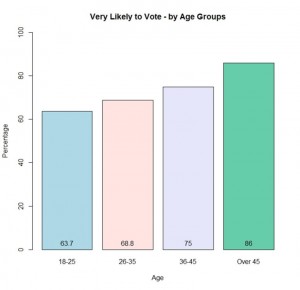 According to the British Election Study 2014, the percentage of the under 25 that declare they are “very likely go to vote” (63.7 per cent) is lower than the percentage in any other age group. One reason citizens don’t vote is because they feel they do not know enough about politics or where the parties stand on important issues. Voting Advice Applications then will be particularly useful in helping them to sort out whether and which parties are addressing their concerns. Using these tools may then encourage them to get out and vote.

The idea behind a VAA is that users respond to a series of questions on political issues, and then receive personalised advice as to how their issue preferences compare to the policy stances taken by parties/candidates competing in an upcoming election. VAA sites have been used extensively in other countries such as The Netherlands and Sweden and frequently attract millions of users, and are now a normal part of election campaigns in a growing number of established democracies. For example, the first VAA was Stemwijzer, which was set up for the 1998 Dutch elections and attracted a quarter of a million users. By the time of the 2006 election the same site was accessed 4.7 million times.

Since VAA are a comparatively new political phenomenon, we are still investigating their consequences on electoral outcomes and turnout. We do have limited evidence that the use of one of these online tools during an election encourages users to seek out even more information. One thing we do know is that the typical visitor is younger and it is younger voters who feel particularly disengaged when it comes to parliamentary elections. These younger voters who may be voting for the first time may feel that they do not have enough information to be able to choose a party or they may feel that political parties are not addressing issues of concern to them. 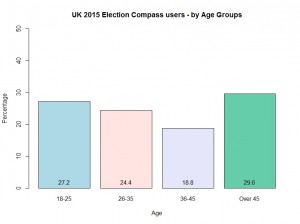 The data collected by the UK Election Compass VAA for the General Election 2015 show very clearly that the under 25 were the top users of this VAA. In fact, the 27.2 per cent of the users were in the age group 18-25 years old.   Those over 45 make up almost 30 per cent but this slightly larger proportion is most likely due to this particular VAA being promoted by local and regional newspapers where the average reader tends to be older.

Use of online tools by young people for political information would appear to be an extension of other social media activity. Data collected by British Election Study shows that that 18-15 year olds are the largest group of users of both Twitter and Facebook. They were only slightly more likely to look for information about parties and candidates on Facebook (15 per cent compared to 9 per cent for 26-35 year olds) and Twitter (25 per cent compared to 22 per cent for 26-35 year olds). However, they were no more likely to share political information on Twitter and Facebook than older respondents in the survey. Therefore, despite greater use of social media in general, younger citizens are not that much more likely to use it for political discussion than older users of social media. One note of caution, the data reported here was collected in March 2015. As election-day approached, the information seeking of younger citizens may have increased and they may have turned to social media more often than older voters. 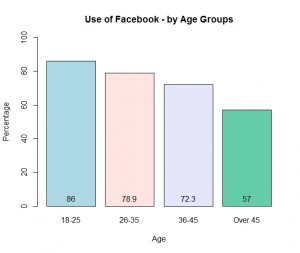 Our data from the UK Election Compass shows younger people made up a large share of users. However, despite being the largest group of social media users they are only slightly more likely to use social media for obtaining political information and no more likely to share political information via Twitter and Facebook. Therefore, while parties and candidates need to communicate to younger citizens via the mediums they use (social media); it still seems there is work to be done in engaging you in the political process by speaking about issues that are important to them.