What does air pollution have to do with building sand sculptures? At the Green Man festival 2015 a bunch of scientists from the Met Office, Royal Meteorological Society and University of Exeter collaborated with professional sand sculptors to show that playing with sand is not only for children but also for scientists. The unique project created a sand landscape to communicate the effect of air pollution to the environment. Felix Leung, a PhD student, tells us about the exprience…

Green Man festival took place at Glanusk Estate in Brecon Beacons National Park on 20-23rd August. It is an annual music, arts and science festival and is renowned for its ethical approach, support for the Welsh local economy and showcasing new talent.

At the festival there is an area called Einstein’s Garden, with interactive science stalls run by universities, academics, and a centre stage with science gig, comedies, debates, talks and even a ceilidh.

The theme for Einstein’s Garden this year was ‘future’. Thre were stalls demonstrating why insects should be the future food source or what human-body advancement in the future would look like. The stall I was involved with demonstrated how urbanisation affects the temperature in the city and the effect of air pollution on plants and human health. 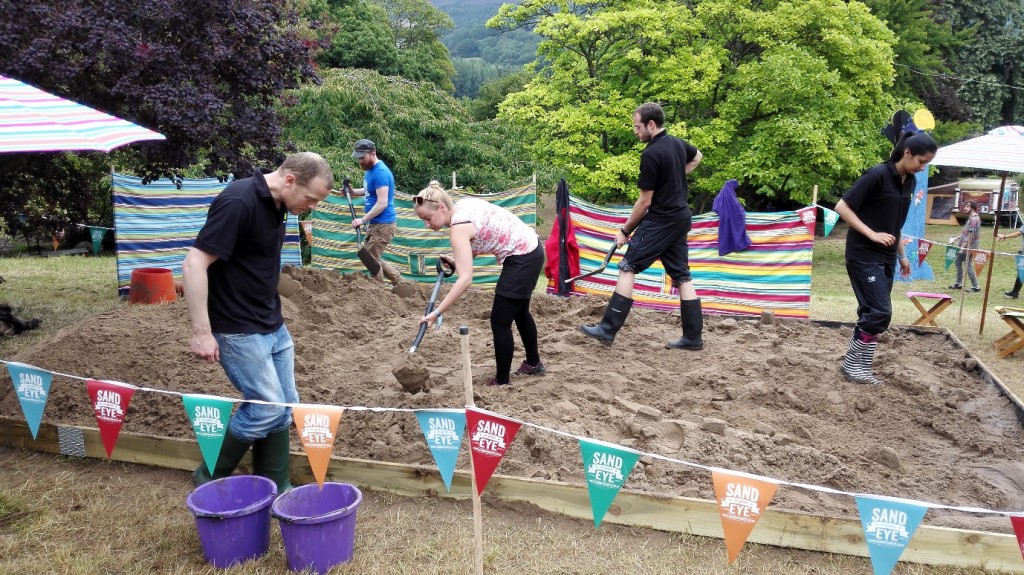 Met Office scientists preparing the sand pitch for the workshop.

Sandscape is a collaboration outreach project between Met Office, University of Exeter and the sand sculptors from Sand In Your Eye, it is developed as part of a Wellcome Trust funded grant awarded to Einstein’s Garden. The sand pit is a rectangular area of 10metres by 4metres. The sandscape had a mountain range in one side and it formed a valley with a ‘river’ flowing towards the city where one side of the river is the rural countryside and the other side is the downtown with tall skyscrapers and the industrial zone. 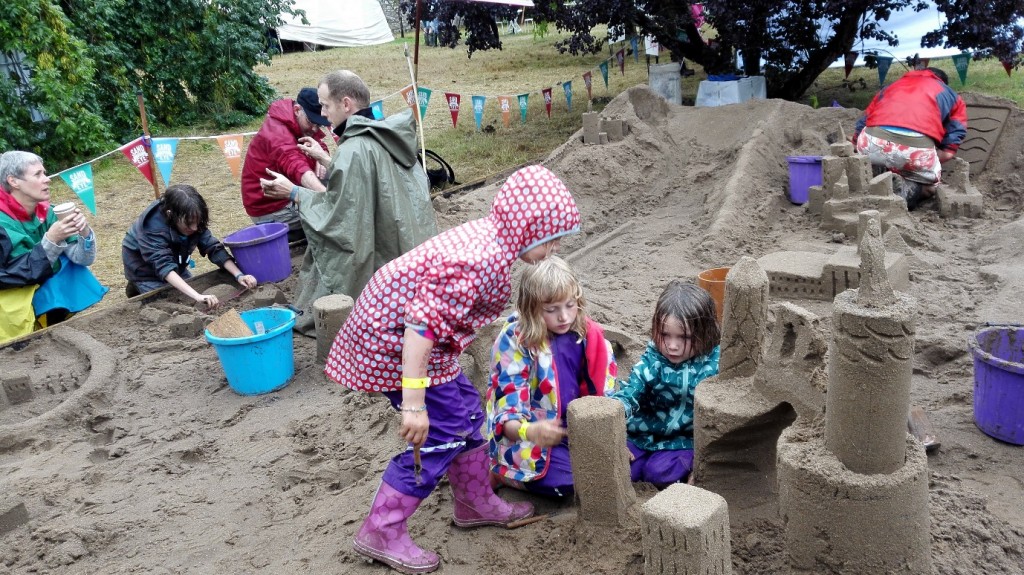 Children carving out the detail of the skyscrapers. 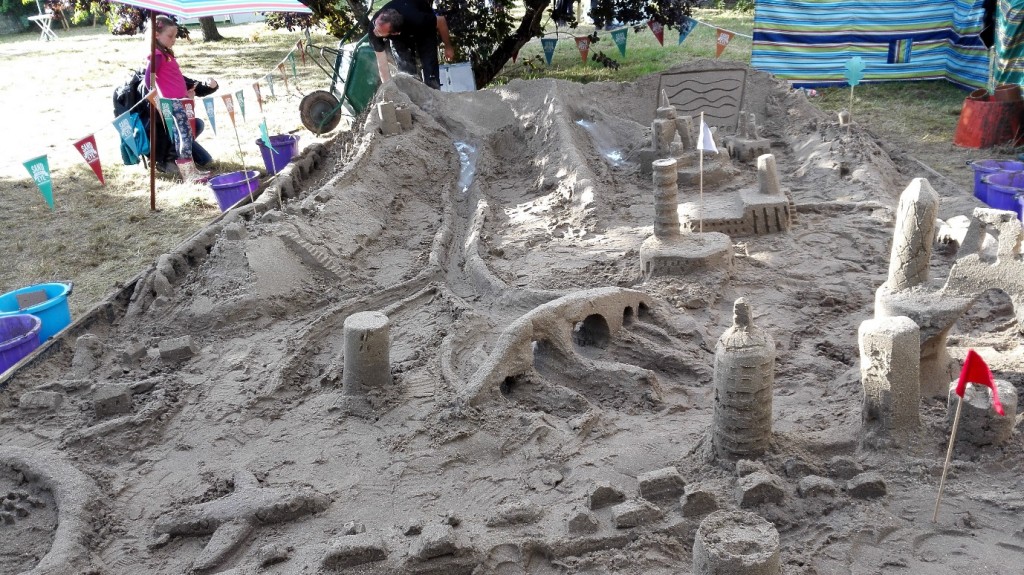 The Sandscape workshop had four one hour session per day. During each session around 15 children and their parents were taught that the principle of making a sand structure is using wet sand, wet sand allow the sand particles to bind together once it dry up and creating a firm and stable structure. Once you master the skill of building sand block, you can use wet sand to create skyscrapers using a long tube as a mould and build arches and bridges.

The children really enjoyed building sand houses and sand factories and they created an incredible landscape with features such as a church yard in the countryside, airport with highway full of traffic, cottage in the forest on the hillside and even a viaduct. The children showed unlimited creativity and enthusiasm, I am sure they are going to be great urban planners in the future.

The workshops ended with the Met Office scientists explaining the science behind the Sandscape project. We put a red flag at the metropolitan area, explaining urban heat island effect occur in the city centre where tall skyscrapers block the flow of air and the concrete release heat during night.

A green flag in the forest symbolised the production of pollens which causes hay fever. A grey flag on the highway and factories symbolise the air pollution such as ground level ozone which could cause asthma in people. We also used a bubble gun to demonstrate the difference of factories chimney height to the pollutant concentration in the surrounding area, if there is a low chimney all the bubbles (pollutants) land in the city centre but if we have a higher chimney the pollutants spread out.

The finale of the session involved of some dramatic smoke effects produced by dry ice placed on the top of the valley, it simulated how fresh cold air flow down to the city. The fresh air was first blocked by the dam on the upper course of the river but once the dam is removed the cold fresh air gradually flowed into the countryside and the city providing everyone’s fresh air. 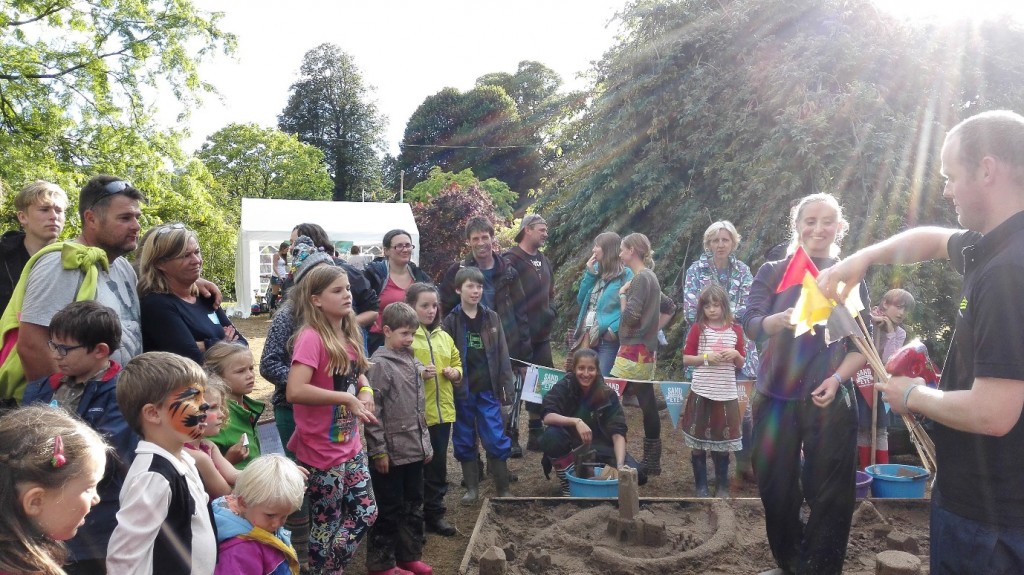 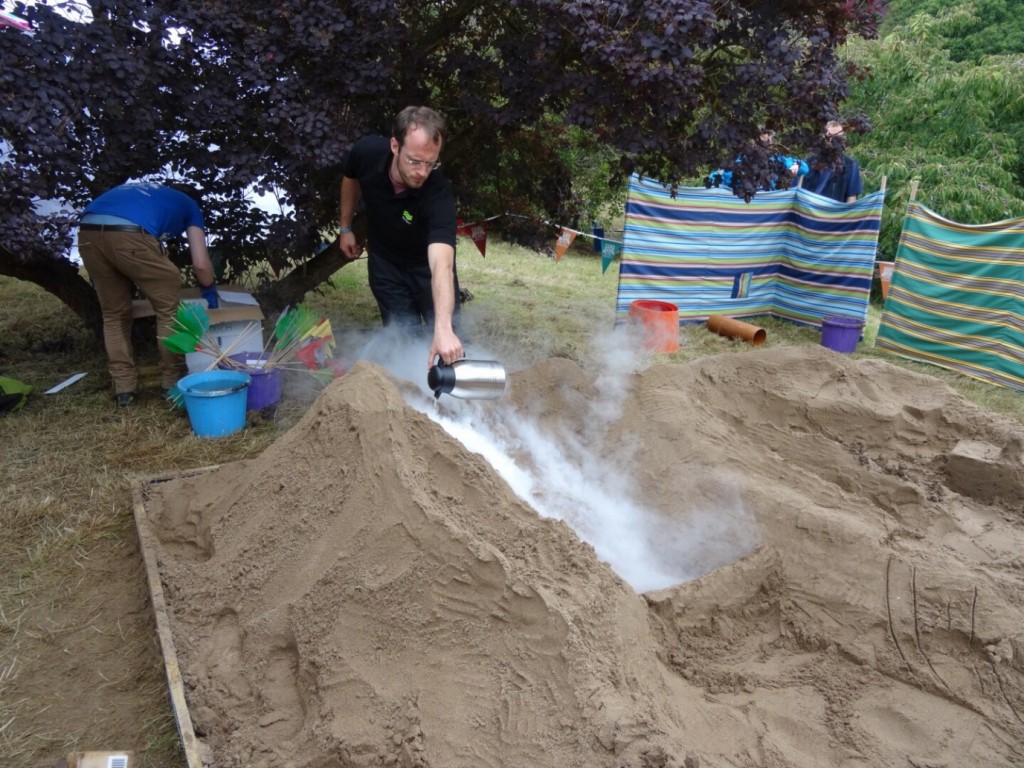 Fresh air blocked by the dam in the valley. 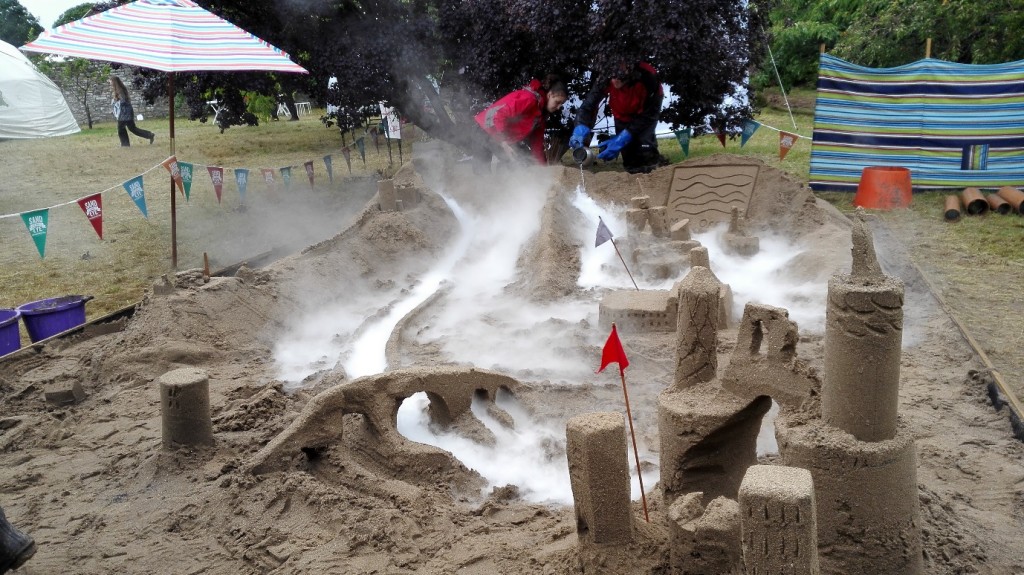 Fresh air flow along the valley and into the city and countryside.

This is one of the most unusual science-communication events I have ever done. I learnt a lot about how to communicate my research to the general public and how to engage with audiences from different age groups.

It was a really fun experience but also a lot of hard work, you have to bend down all the time, stand in an uncomfortable position to avoid trampling other structure, carry heavy buckets of water and deal with the Welsh weather. It was exhausting at the end of the day but worth every drop of sweat when you saw the Sandscape evolve over time and the kids learn some climate science. It will never be the same when I go to the beach again.