Last month, ISIS destroyed the 1,500-year-old Mar Elian Monastery in Al-Qaryatayn, Syria. Professor Emma Loosley, expert in Theology and Religion at the University of Exeter, has lived in the area and has studied the sacred site. Here, in an article adapted from one first published in The Catholic Herald, she outlined the sense of loss to local people. 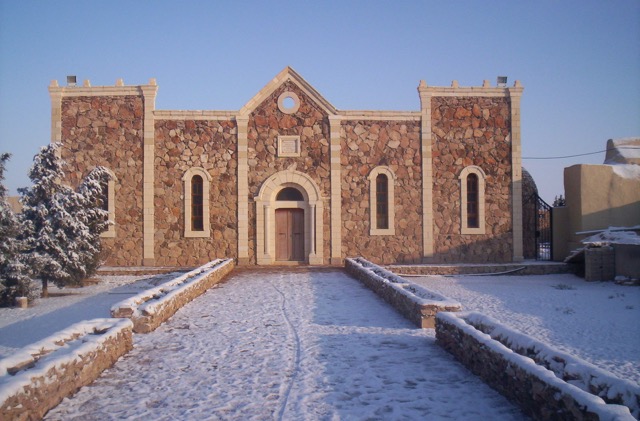 The Mar Elian Monastery has been destroyed by IS.

When I first moved to Dayr Mar Elian in the summer of 2001 I was slightly disconcerted when the Qurwani, as the people of Qaryatayn are known, kept asking me if I had met Mar Elian yet.

Since he is believed to have died over 1,500 years ago I thought that they meant had I seen the sarcophagus, which of course I had. When I said this I was somewhat perplexed to realise that I had misunderstood the question (complicated of course by my faltering Arabic and their thick regional dialect).

What the Qurwani meant was: ‘had I spoken to the saint personally?’ One man told me of walking in the vicinity when a stranger accompanied and blessed him, and he later realised that the man had been Mar Elian (St Julian) and the site guardian told me that late at night in the chapel a voice had repeated: “God give you health,” three times – which he took to be Mar Elian praying for him as he was suffering from Parkinson’s disease.

I recount these stories to try and impress on the reader how central the Monastery of Mar Elian was to the local populace. The saint was a much-loved figure in the town and treated more as a venerable uncle in most homes than a distant exemplar of the faith.

What is more, in the case of that first man who had seen Mar Elian, I don’t know whether he was Christian or Muslim. The Sunni townspeople named him Sheikh Ahmed Khoury (Sheikh Ahmed the Priest) and the Christians of the town allowed their Muslim neighbours to place the green satin shroud of a Muslim holy man over the Byzantine sarcophagus in the monastery church. There, on a Muslim satin shroud, rosaries and saints’ cards lay with votive candles lit by those of both faiths.

Much has been written in the last few weeks on the physical impact of the loss of the monastery but little consideration has been given to the psychological trauma that currently affects those of us who knew and loved the shrine.

Mar Elian or Sheikh Ahmed was a very real presence in the lives of all who knew the monastery and I know at least one family who credit the intercession of the saint for leading them to the doctor who was able to cure their young son and enable him to walk. IS has ripped the heart out of a poor desert community who were united in their pride in Mar Elian.

Qaryatayn is one of the remotest, poorest settlements in Syria. Located in the midst of the Syrian desert between Homs and Palmyra it only exists because the site has a modest oasis that has permitted limited agriculture. It was the centre of a kingdom in the Middle Bronze Age and, under the name Hazar-enan, appears in the Old Testament (Ezekiel 47:17, 48:1; Numbers 34:9-10). The monastery (Dayr) of Mar Elian almost certainly dates back to around the fifth century and is considered the last resting place of Mar Elian esh-Sheikh.

Dayr Mar Elian appears to have been inhabited from Late Antiquity until the eighteenth or nineteenth century, when it was abandoned at the time when many local Christians left the Syrian Orthodox Church to join with Rome as members of the Syrian Catholic Church.

In 2001 the Syrian Catholic Metropolitan of Homs, Msgr Georges Kassab appointed Fr Jacques (Yaqub) Mourad from the Community of Al-Khalil as parish priest. Fr Jacques was one of two founder members of the Community of Al-Khalil with his superior, Fr Paolo Dall’Oglio SJ and the two of them believed in a vocation of Abrahamic hospitality and Christian-Islamic Dialogue. Both have now been kidnapped by IS – Paolo in July 2013 and Jacques in May 2015.

Until Jacques’ abduction Dayr Mar Elian had remained the heart of the town, comforting the local population and becoming home to hundreds of, mainly Muslim, internal refugees. It was a beacon of Inter-Faith co-operation with Jacques and the local Sheikh standing side by side to prevent the town splintering along sectarian lines.

Last week IS broke the heart of a whole town and only time will tell if it can ever be mended. A friend from Qaryatayn who has managed to escape to Europe sent me a text that says it all: “My heart keeps crying Mar Elian.”

Since the destruction of the monastery we have learned that IS have broken more hearts by destroying the Temples of Bel and Baalshamin and a series of tomb towers at Palmyra, and brutally murdering the man who had looked after them for more than 50 years, Khaled al-Asad.

This destruction has been dismissed as some as being irrelevant compared to the human suffering the Syrians are enduring, but if we think back to the emotional suffering of the people of Britain not only in London, but in Coventry, Exeter and many other places during the Second World War, we should understand that this destruction is robbing many Syrians of any hope that their lives will ever be the same again.