Darren Schreiber is a Senior Lecturer in Politics at the University of Exeter, his research looks at how our brain’s process the world around us. Here he examines why one picture of a dead child captured such attention… 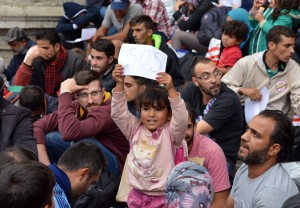 Refugees fleeing the crisis in Syria.

One child, face down in the water on a beach. In week where tens of thousands of refugees are fleeing civil wars and genocide, where thousands are stuck on trains and in train stations as they try to escape to a better life, where seventy-one corpses are found abandoned by human traffickers in a truck on the side of road … why do photos of one dead child evoke such intense emotion and capture so much attention?

For the past decade and a half, I have been bringing together the tools of political science, psychology, and neuroscience to try to understand how our brains process the world. While we have language instincts, we are great at making tools, and we can do a range of other impressive things with the fantastic brains we have, my research has brought me to the conclusion that our brains are built for politics. We evolved the particular set of cognitive and emotional abilities enabled in our brains because we faced an environment where understanding how to form and manage coalitions was critical to survival.

A consequence is that we are constantly trying to assess who is an ‘us’ and who is a ‘them’. But this evaluation is complicated because coalitions are nested, overlapping, and dynamic. The person we rode with in the elevator today was a part of team ‘us’, even for just a few seconds. The people who didn’t get there before the doors closed were part of ‘them’. Similarly, it is easy to think of the streams of strangers at the ports and on the trains as ‘them’, with ‘their problems’.

One odd thing is that we have two different sets of tools for moral evaluations depending on whether someone is an ‘us’ or a ‘them’. When research participants are presented with the ‘train’ version of a famous moral dilemma, they decide to pull the lever and save the five people facing doom from a runaway train, diverting the train and sacrificing a person stuck on the other track. In this utilitarian judgment, the research participants were weighing the costs and benefits and sacrificing the one for the many. When we make such utilitarian calculations, we deactivate the Default Mode Network of the brain, just as we do when we are solving math problems.

But, when asked about pushing a person standing next to them over the edge of the bridge to stop a trolley that is heading towards five people, research participants refuse to sacrifice one for the many. Rather, they activate the brain’s Default Mode Network and make a judgment based on a categorical moral imperative akin to the type described by philosopher Immanuel Kant. It is simply wrong to push someone off a bridge, so we don’t.

When we hear about thousands dying in a war, it is easy to get out the mental calculator and run the sums. ‘They’ are suffering, but we calculate those losses, we don’t feel them. The social, economic, psychological, and political costs of the multiple crises feeding the influx of refugees are down the train tracks.

But that little boy, Aylan Kurdi, he is standing next to us on the bridge. We see through his eyes, through the eyes of his parents and family. We imagine his potential future or we hear his playful giggles when he is tickled.

Why this child when so many have died before him? One part of that Default Mode Network, the medial prefrontal cortex, activated when I showed photos of the faces of white people to white participants, but deactivated when they saw black faces. This specific brain region is involved in mentalising, the process of putting ourselves in the shoes of another, suggesting a tendency to objectify blacks and personalise whites. But, we don’t encounter abstract disembodied faces floating about, rather we encounter people, in contexts.

So in the next experiment I showed photos of blacks and whites, who were either fit social norms (students, doctors, families) or violated social norms (homeless people, gang members, criminals). The activity in the medial prefontal cortex followed the social norms, and the effect of race was erased instantly. They personalised the families, irrespective of whether they were black or white and they dehumanised the criminals, regardless of race.

Little Aylan, wearing clothes you could buy on the High Street, was dead, carried along with the waves of refugees and waves of an unforgiving sea. Our magnificent brains could add him to the incalculable tally of loss, but the gift this photo is that we can see him as one of us and we can realise a moral imperative to do the right thing.