This blog was written by James Winterbotham; James is an undergraduate student of social sciences and data analysis at the University of Exeter. As part of a team of students working with the University’s Q-Step Centre he has collected and analysed the results of the 2015 local elections.

This year’s English local elections have returned relatively low numbers of female representatives; just 31 per cent of newly elected councillors are women, which is actually a slight decrease compared to the 2014 figure of 32 per cent.

In the context of renewed interest in gender equality in politics, accompanied by a film dramatising the female suffrage movement and increasing efforts by pressure groups such as the Counting Women In Coalition to secure 50/50 gender representation in Parliament, this might strike some as disappointing.

Attitudes toward the urgency of achieving proportional gender representation vary significantly between parties. Likewise, there is no consensus over which methods are acceptable to achieve this. For example, The Labour Party has considered all-women shortlists for parliamentary selection contests (p.67). The Conservatives, who also support the idea that women should be better represented in senior positions in society, nevertheless hold that ensuring equality of opportunity for all is fairer than positive discrimination is in favour of women (p.19).  Smaller parties follow a similar cleavage: the Green Party aims to field 50 per cent female candidates at next year’s elections whilst UKIP is adamant that policies targeted specifically at women are unnecessary and unfair. Given this variation, it would not be surprising if some parties had considerably higher shares both of female candidates and of female councillors than others. I set out to investigate this.

Is there a difference in the success of female candidates by party? There certainly is. As the bar chart below demonstrates, left-wing and/or liberal parties such as Labour, the Greens and the Lib Dems have considerably higher percentages of female winners than the Conservatives and UKIP. Labour, for example, has returned councillors who are approximately 37 per cent female, whilst the new Conservative councillors are 29 per cent female; a considerable difference of eight percentage points.

Independents have a lower proportion of female councillors than any of the major parties.   Fewer than two out of ten independent councillors elected are female. This may seem surprising; media coverage of independents, although sparse, has tended to give the impression that they are generally progressive and disillusioned with the current political situation. Nevertheless, although some independent candidates may favour the greater inclusion of women in politics, they are not themselves a shining example of it. 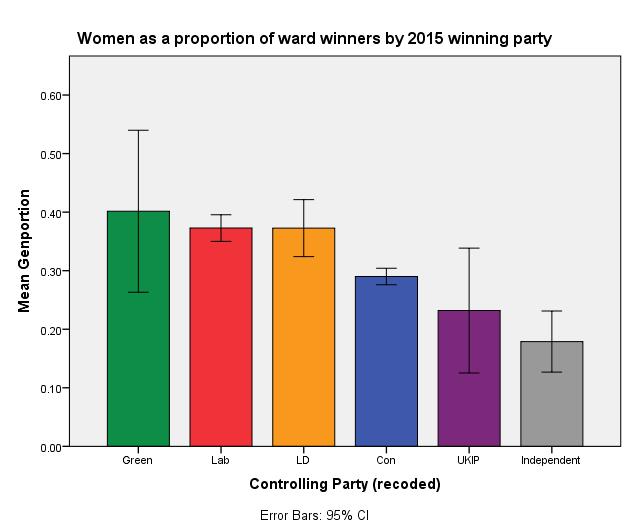 A quick note on statistics: the I-shaped bars on this chart are Error Bars. As long as the Error Bars of two parties do not overlap, we can be 95 per cent sure that there’s a genuine difference between them that’s not the result of random chance. Otherwise we can’t be certain that a meaningful difference exists

This finding tells us that the under-representation of women varies between the main political parties and between independents. But it does not tell us why. Further analysis was needed to establish whether this is the result of fewer women than men standing for local elections, fewer women than men being elected, or a combination of the two.

I mentioned earlier that about 31 per cent of councillors elected this year are women. The percentage of women among candidates fielded is very similar, at 32 per cent. In fact, the difference here is so small that we can’t be certain it’s not the result of random chance. This suggests that, on average, voters do not disproportionately favour male candidates. The overall disparity between men and women, then, can be traced back to when candidates are selected and fielded, rather than to voters’ choices on Election Day.

The caveat that voters do not disproportionately favour male candidates on average is important, because it would appear that this varies significantly according to the party they voted for. All the major parties fielded candidates that are about 30 per cent female, varying little from the average figure of 32 per cent. Once the councillors were elected, however, significant differences in gender ratios appeared. This means that those who voted for Conservative, UKIP and Independent candidates disproportionately voted for male candidates. However, those who voted for Labour, the Liberal Democrats and the Green Party voted disproportionately for female candidates. This existence of these opposing tendencies is what makes the overall effect of voters on gender representation so slight.

Based on these findings, a reasonable conclusion might be that the overall difference between male and female councillors originates in the fielding of candidates, but that variations in this disparity by party originate from the process of voting.

Although interesting, these findings barely scratch the surface of the complex and well-documented gender inequality in every level of British politics. More research is needed on the motives and the disincentives of people considering whether to stand for election at the local, national and international levels. In particular, the lack of women among those who stand as independent candidates and are elected as independent councillors is noteworthy and needs explaining. Once answered, these questions would contribute to a better-informed and more effective approach toward equal gender representation.