Leonardo DiCaprio’s Oscar acceptance speech calling for action on climate change has received a lot of attention. Celebrities who are passionate about stopping climate change often quote science, but this can be risky for a non-expert when it’s such a complex topic, and some carry it off better than others.

So, how did Leo DiCaprio do? Asks Professor Richard Betts is Chair in Climate Impacts at the University of Exeter. 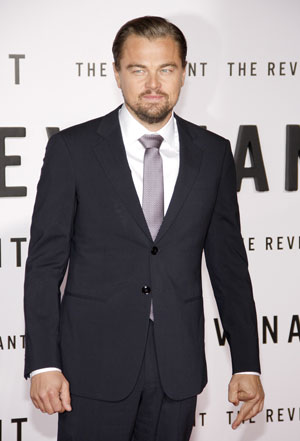 I’ve taken a close look at the part of his speech that focussed on climate change, and I think he did rather well. Not counting the phrases which are his personal opinion on how to respond, he makes ten statements that relate to at least some extent on science. Since I’m used to marking students’ work, I’ve taken the liberty of awarding him points for each statement…. Let’s see how he did….

“Making The Revenant was about man’s relationship to the natural world. A world that we collectively felt in 2015 as the hottest year in recorded history.”

“Our production needed to move to the southern tip of this planet just to be able to find snow.”

Hmmm. Personally I’d have stayed well away from this example. It’s perfectly true that northern hemisphere snow cover has been in decline for some decades, but linking specific weather events or even individual seasons to long-term climate change is quite involved.

There are an increasing number of studies that look at the changing probabilities of particular weather events or extreme seasons, so in some cases we are able to make links with climate change, but I’m not aware of a specific study for the winter of 2014/15 in Western Canada yet.

It may be possible to argue the toss over this, but I’m going to be strict and withhold a mark here – sorry Leo! But don’t worry, you still have chance to redeem yourself….

Yes, absolutely. I assume he means human-caused climate change. The greenhouse effect is without doubt a real thing, increase carbon dioxide and other greenhouse gases will therefore cause warming, and the increase in carbon dioxide is definitely caused by humans.

There is no serious disputing of these facts, even from climate sceptics (at least, not the ones who have looked into it properly). The latest assessment by the Intergovernmental Panel on Climate Change (IPCC) was that it is: “Extremely likely that human influence has been the dominant cause of the observed warming since the mid-20th century.”

“It is happening right now.”

Yep. Temperatures have been rising around the world, other signs of warming are also apparent. Many glaciers are shrinking, sea levels are rising (both due to melting land ice and expansion of water as it warms), and Arctic sea ice is in decline. Although Antarctic sea ice has increased, this is still less than the loss in the Arctic.

Signs of the onset of spring, such as flowers blooming, trees coming in to leaf, birds migrating and eggs hatching, are on the whole occurring earlier in the year than several decades ago.

Some (but not all) types of extreme weather event are becoming more frequent or severe, and this may well extend to other extremes in coming decades.

The average rate of warming at the surface did slow temporarily for a few years, but while there is an interesting academic debate over this ‘hiatus’ or ‘slowdown’, this does not affect the big picture because the long-term heating up of the climate system is still ongoing.

So yes, there is overwhelming evidence that climate change is happening.

“It is the most urgent threat facing our entire species.”

There’s a lot to unpick here, and it depends to some extent on what he means by ‘threat’ – does he mean a threat of impacts that are unpleasant but not actually life-threatening, or is he going further than that and implying a threat to the actual survival of our species?

If the latter then I would not agree – I don’t see convincing evidence that the entire human race is going to be wiped out by climate change any time soon. Having said that, inexorable warming could ultimately take temperatures past tolerable limits in some areas. One climate modelling study suggested that the ‘wet bulb temperature’ (which factors in humidity) could eventually exceed a proposed human body tolerance limit of 35°C across wide regions of the world – if the planet warmed by 12°C. This is not at all likely this century, and is at the upper end of what might be reached in a couple of centuries, if fossil fuels are burned at high rates and the climate responds as fast as is thought plausibly possible. So, it’s not the most likely outcome, and won’t happen soon, but it can’t be ruled out for the longer term.

However, even if the ‘urgent threat’ is not actually to everyone’s life, there is no doubt that everyone on the planet is increasingly at risk of being affected in some way, either directly or indirectly. Direct effects could include risks to local food or water security, or loss of homes due to coastal flooding from sea level rise. Those who do not experience these could still be affected indirectly, through shocks to the economy or pressures of migration.

So yes, I do agree that every member of our species may see some impact of climate change. Since it’s not really clear what DiCaprio means, I’m going to be strict again and award half a mark instead of a whole one.

“And we need to work collectively together.”

[Not a science point]

Fair point. Scientific research supports the view that the longer the delay in reducing global emissions, the harder it will be to avoid the risk of severe impacts.

“We need to support leaders around the world who do not speak for the big polluters, but who speak for all of humanity.”

[Not a science point]

“For the indigenous people of the world.”

Indigenous ways of life are often dependent on particular aspects of the local environment, and in many cases these are threatened by a changing climate, especially in cold regions.

“For the billions and billions of underprivileged people out there who would be most affected by this.”

Poorer people, communities and nations do often tend to be more vulnerable to environmental changes, having less capacity to adapt (eg, less able to afford expensive sea defences). Similarly they are often more vulnerable to extreme weather and its consequences, not having such resilient infrastructure and buildings for shelter, or well-established early warning systems. Moreover, crop yields in tropical regions are expected to be hardest hit, and this is where many developing countries are.

I’m not so sure about the ‘billions and billions’, – with a world population of seven billion, rising to nine or 10 billion by mid-century, that doesn’t leave much room for ‘billions and billions’ who are ‘most affected’ while others are less affected – but I’m possibly verging on the pedantic here so won’t labour this point!

“For our children’s children.”

This is a good way of communicating the timescale of the most severe impacts. While climate change is already happening, the highest impacts are still some way off (although we may become irreversibly committed to them soon).

In particular, sea level rise takes a long while to happen to the full, as it takes time for huge bodies of ice to melt and for heat to penetrate to the ocean depths to warm and expand the deep water. Those of us alive today may well not see the worst effects, but the potentially huge impacts in the early part of the next century would be within the life expectancy of our grandchildren.

“And for those people out there whose voices have been drowned out by the politics of greed.”

[not a science point]

Sandwiched between two bits of awards ceremony-speak, ‘not taking this planet for granted’ is a very good point. Earth is the only planet in our solar system suitable and comfortable for human life, and even then it has gone through some very large changes in climate in its history.
Although such changes have happened before, humans were not around then, and there is no doubt that if major changes were to happen again, they could cause major upheavals to our civilisation.

By tinkering with a system that we don’t yet fully understand, it could be us that makes something major happen if we’re not careful. While we should not panic, we should not be complacent either. We should not take it for granted that the climate will remain within the bounds that we are used to, or that it will change gradually enough for us to keep up.

Still a bit of room for improvement, but overall that’s pretty good I think ….and I suspect much more than Leo would give me for my acting skills!!

This post is associated with Professor Betts’s presentation at the Weather, Art and Music festival hosted by the University of Exeter on 5th March 2016