Biosciences PhD student, Philippa Brakes, looks at the diversity in behaviour of our ‘oceanic cousins’. From the tool using sea otters to the ‘bubble netting’ strategy of the humpback whale. 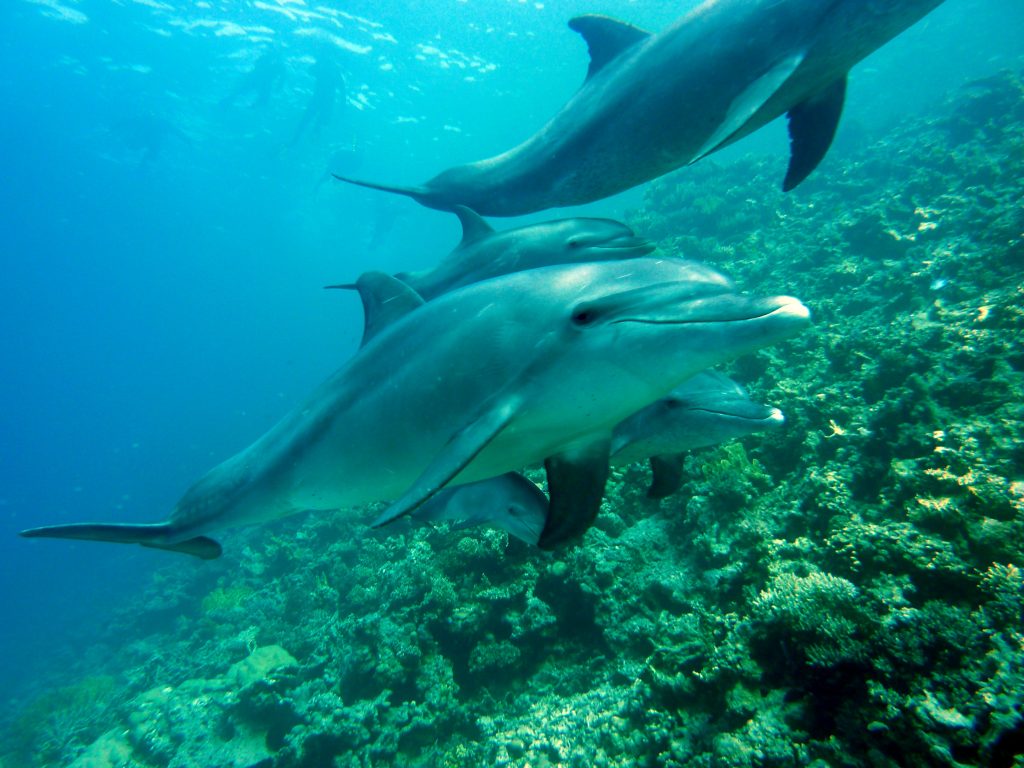 The beguiling behaviour of marine mammals in their natural environment is fascinating to us human observers. Watching dolphins leap gracefully through the surf, or whales making waves with their massive tale flukes is the stuff of countless bucket lists and high definition wildlife documentaries.

Perhaps part of the appeal lies in marine mammals behaving a lot like we do. They share many of our biological characteristics, such as bearing live young, suckling them with rich fatty milk and investing time and energy into rearing them into adulthood.

Studying their behaviour, what makes them tick as complex social creatures, is essential for their conservation in an aquatic environment which remains almost entirely alien to us. And while it may be alien, it is an environment with a massive human footprint.

For unfortunately mammalian attributes are not all we share with our oceanic cousins. There is arguably now no marine habitat that remains unaffected by human activities. Prey depletion caused by humans, noise, temperature changes, chemical pollution and entanglements in fishing gear have all changed the place in which marine mammals evolved.

Our research shows that this simple reality makes the need to understand their behaviour and social structures all the more urgent, a call which is being echoed by the charity Whale and Dolphin Conservation.

In recent decades there has been a strong emphasis in conservation circles on understanding the population size and distribution of marine mammals, as well as their genetic diversity.

Conservation is principally obsessed with conserving genetic diversity, which is exactly as it should be, as diverse gene pools help ensure resilience against environmental change. But genes may not be the whole story.

Marine mammal behaviour, just like ours, is partially determined by genes and the environment in which they live. However there are also social factors at play, and what makes marine mammals behave the way they do is potentially as complex as the processes which drive human behaviour.

In some cases, nurture may play just as important a role as nature for marine mammals. Almost 20 years ago, renowned conservation biologist Bill Sutherland examined how the behaviour of different species could be used to improve conservation efforts. He concluded that behavioural ecology needed to be better integrated into conservation science and policy making. But to what extent has this message from 1998 been taken on board?

Marine mammals exhibit a wide range of fascinating behaviours, from the complex cooperative bubble-net feeding of humpback whales, to ice-cave building polar bears and tool-using sea otters. They also have a great diversity in their social structures and changing social dynamics, which range between the complex third-order alliances of bottlenose dolphins, close relationships between non-related males, to the more solitary lives of beaked whales.

As well as having innate behaviours, which they acquire through their genes, these species, like humans, can learn individually and from each other. Social learning may be of particular importance to conservation efforts, because it can influence the resilience of a population to changes in their environment.

Killer whales learn foraging strategies from their social group and tend to stick to them. As a result, if there is a decline in their preferred prey, they may be less likely to switch to other species, or use alternative foraging tactics. Such a behaviourally conservative species is likely to be more vulnerable to change.

But learning is only part of marine mammal social dynamics. Social structure, and the various roles played by individuals may also be important for how a population responds to change. The loss of individuals that hold key information on the location of critical habitat or a food source may have significant consequences.

Humans live in many different types of cultures, environments and circumstances. We make important choices about what to eat, who to socialise with, where to live and how many offspring to have. These factors can strongly influence our fertility rates, survival, and even our evolution. It is certainly plausible that many of these factors influence the success of marine mammals as well.

A better understanding of the behavioural ecology of marine mammals is therefore hugely important. It is difficult to envision an approach toward conserving a population of modern humans which merely preserved their genetic integrity and did not also consider their socially learnt behaviour.

While there are some attempts to incorporate behaviour, efforts to conserve marine mammal biodiversity still focus strongly on maintaining genetic integrity and diversity. But the emerging evidence indicates that social and behavioural diversity may also be central to individual, group, and population viability. The challenge ahead is teasing out the most relevant factors and understanding how to incorporate this new knowledge into conservation efforts.

On the whole, policy makers have been slow to keep up with the emerging behavioural research. More alarming still, from the perspective of the marine mammals themselves, is that the degradation of their environment has continued apace.