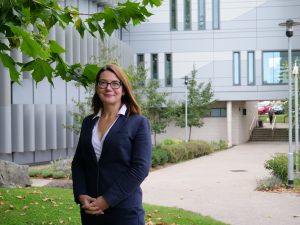 Around 415 million people worldwide have diabetes, while 100 million people have cancer. They are unequivocally two of today’s greatest global health challenges. In bringing her world-leading knowledge of cancer to Exeter’s renowned diabetes research team, Professor Chrissie Thirlwell aims to benefit people with both conditions.

The newly-appointed Mireille Gillings Professor of Cancer Genomics will investigate the increased risk of some cancers in type 2 diabetes and obesity.

“If you have type 2 diabetes, you have a 20 – 30 per cent increased risk of developing certain cancers including bowel, liver and pancreatic cancer. The potential mechanisms underlying this increased risk are complex and incorporate lifestyle, dietary and other known risk factors such as obesity. The first step will be to determine any specific mechanisms associated with type 2 diabetes or obesity individually.

“The Mireille Gillings Fellowship has given me the infrastructure and opportunity to bring together my experience of cancer genomics and the wealth of world class research in diabetes and obesity at Exeter. It will accelerate our understanding of the increased cancer risk through utilising genomic data that has already been generated while producing new epigenetic data which will inform us about the impact of lifestyle on cancer risk.”

Chrissie’s expertise neatly crosses over with several research strengths at Exeter’s College of Medicine and Health and the wider university. She has natural synergy with Professors Sian Ellard and Andrew Hattersley in genomics, including a shared involvement with Sian in the 100,000 Genomes Project. Chrissie will join the Genomic Medical Centre team bringing her cancer genomics experience at a pivotal time when the 100,000 genomes project is being completed and DNA sequencing is becoming a routine part of patient care through the delivery of the next 5 million genomes.

The research funded by the Mireille Gillings Fellowship dovetails with several other groups in the RILD allowing new and exciting collaborations including with Professor Tim Frayling in large-scale genome-wide association studies looking for patterns in genes, and Professors Jon Mill and Katie Lunnon in epigenetics, or the study of how genes are activated, and Prof Lorna Harries in how genes are transcribed. Like Professor Noel Morgan, she is also already looking at clusters of cells known as islets in the pancreas, and how they contribute to the development of pancreatic neuroendocrine tumours.

Chrissie plans to apply these burgeoning collaborations to her new research and her body of work studying neuroendocrine tumours – rare tumours that can grow in different body organs. The international collaborations she has established to aid understanding and improve treatment have made her a global authority.

A large aspect of the Gillings Fellowship, supported by entrepreneur Mireille Gillings, is a commitment to promoting women in leadership roles. Through her involvement in UCL Cancer Institute’s Athena SWAN team, where they secured a coveted silver award to recognise commitment to equality, Chrissie realised the extent of a problem that had been invisible to her. “I was at a stage in my career when I wasn’t even aware that so few senior roles were held by women. I naively thought a lot of it was down to personal choice around work-life balance and families. Through working with industry during the UCL Cancer Institute Athena SWAN process, I learned that there were many incredibly capable women who really wanted those opportunities – they just weren’t getting them. I was struck how the statistics are alarmingly similar across the public and private sectors in that only 20% of senior leadership roles are held by women.

“It has to be about the right person with the right skills to do the job, there’s so much evidence that having diversity across all areas in leadership roles and on executive boards, leads to a far more productive workforce.”

Now, the medical oncologist plans to continue her clinical work alongside her research, joining the Royal Devon & Exeter NHS Foundation Trust. She has bold ambitions for the region. “I’m really keen to link with other trusts and create a European Centre of Excellence for the management of neuroendocrine tumours in the South West. We have the expertise across the region and it would mean a huge benefit to patients.

“It always blows people away when I mention the statistic that one in two people born after 1960 will be diagnosed with cancer at some point in their lives. Yet I’ve seen through my working life that prognosis and treatments are continuously improving. We’re moving towards a time where cancer becomes a chronic disease that people live with, rather than die from. There have been recent improvements in early diagnosis, and Exeter’s research has contributed to that through Professor Willie Hamilton’s team, however there’s still more work to be done .
“We’ve also seen major advances in treatment, particularly through immunotherapy, which harnesses the patient’s own immune system to fight cancer cells. Being part of those advances make my job extremely rewarding. When a patient is referred to an oncologist, you generally look after them for life. You get to know them and their families really well, and these days, there’s so much more we can do to improve their prognosis and enable them to live as normal life as possible during and after treatment.”

Chrissie arrives at Exeter at an exciting time. The diabetes research team recently secured a major £6 million award as part of the Government’s modern industrial strategy. The award recognises excellence with capacity to grow, and aims to enable the research to reach the next level, through academic recruitment and investment in infrastructure and facilities.
A keen open water swimmer who swam the English Channel while completing her PhD, Chrissie is looking forward to exploring all that the South West can offer. “The lifestyle is the icing on the cake for me in moving to Exeter,” she said. “It’s such an amazing time to come here. I‘m passionate about education and the expanding Medical Sciences and Medicine programmes present some really exciting opportunities, alongside the many research opportunities. I’ve had an incredible welcome so far and I’m really looking forward to getting stuck in and making a difference.”