To get our blog going, and to celebrate Black History Month, Senior Lecturer in Portuguese and AHRC Leadership Fellow Ana Martins writes about her current research project.

The “Women of the Brown Atlantic” project: visions of the impossible

I’ve always felt slightly anxious in Brazil, as if I had arrived there too early, knowing too little, feeling too much (guilt? fear? love?). The trips started during my PhD at the University of Manchester, which was dedicated to studying Lusophone African literature alongside Portuguese literature. One thing I remember from those years is the flow of African-centred material, both in Portuguese and in translation, that came from Brazilian academia. It was (and continues to be) overwhelming. I soon realised that one had to travel there, attend conferences, meet experts and fellow students, writers and poets, because Brazil was completely unavoidable if you were researching Lusophone Africa.

Portugal was important too, but in another, less urgent way. Going to Brazil to discuss Lusophone African cultures and literatures was very much like trying to look in three different directions simultaneously. It was often intellectually stimulating, and certainly extenuating. I had first noticed Brazilian constructions of blackness, brownness and whiteness back in Portugal, through popular culture and telenovelas, but this was the first time I was experiencing these being projected onto me, a white Portuguese young student who knew way less than she thought.

In my first visit to Brazil, back in 2006, I, like many tourists, stopped in the street and bought a painting from a black street artist, Vitorino, which now adorns my office wall. The work depicts a bahiana woman sitting down on a stool, her head and torso turned to the left. Next to her is what I later learned to recognise as a tabuleiro filled with acarajés. At the time, I didn’t know that eight years onwards I would be writing about this very Afro-Bahian street-food, and that the project would lead me to conceive of another project on memory and mobility in the Brown Atlantic. The flight from Lusophone African literature, the subject of my PhD thesis, was already on its way. It began with the buying of this painting. 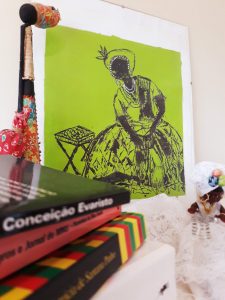 I can see it now, how the act of buying reified my own whiteness in Brazil, directing my research in certain ways at the expense of others. As I witnessed, in the Brazilian conference halls, what I often perceived as the idealisation of Africa and its re-inscription on the body through clothes, jewellery, hairstyles, music, and food, I experienced my own Portuguese whiteness on the street as a reified experience. Or better put, I experienced myself reifying my whiteness with my habits, my purchases. Me witnessing my whiteness take up space before me, filling my luggage in the airports of Rio de Janeiro and São Paulo, and later Salvador da Bahia, Santa Catarina, Minas Gerais.

I would not want “Women of the Brown Atlantic,” the new project driving my research, to take off without being calibrated by these reflections, because it is, in many ways, the culmination of my early journeys through the Brown (and Black) Atlantic(s) – Portugal, UK, Brazil, Mozambique, USA, Italy – ten years of travelling, crossing borders, meeting people, learning and (mostly) unlearning about black and white histories, trying to work out how to write, how to be a feminist, how to think about this world’s (neo)colonialism, racism and sexism, how to talk about Africa (which eventually became the title of one of my undergraduate second year modules!), how to engage with Brazil, and finally, how to look at Portugal afresh.

“Women of the Brown Atlantic: Real and Imaginary Passages in Portuguese 1711-2011” is a project concerned with the (in)visibility of black female mobility and memory in the Brown (i.e., Portuguese speaking) Atlantic. One way in which it encourages new engagements with black history is by questioning the usefulness of the image of the archive as a universalised metaphor for the storage of memory. Is the archive metaphor adequate to theorise black female memory of the Brown Atlantic? If this memory is grounded in the invisibility/silencing of black women, is it adequate as a universalised memory metaphor per se?

With these two questions, the project aims to revise the use of the archive metaphor, and its historical complicity with the maritime, from the specific viewpoint of Lusophone black women and white men’s engagement with remembering as a creative process. The notion of memory as archival is often permeated with assumptions about (maritime) archives as neutral storehouses that hold the past and future and are thus able to mobilise a totalising interpretation of the past. However, as record keeping systems, archives are not neutral, but active storehouses where power is negotiated, contested and confirmed. “Women of the Brown Atlantic” develops a new framework for claiming under-theorised gendered and queer memory sites of the Brown Atlantic by introducing the potentially field-changing metaphor of the rainbow, derived from an Afro-Brazilian popular saying: “if you walk under the rainbow, you run the risk of changing your sex.”

In Brazil, the image of the rainbow is tendentiously associated with Orishá Oxumaré, the male-female snake-like God of movements and cycles in the Candomblé Afro-Brazilian religion (Verger 2002), who holds the power to change people’s sex. This project takes Oxumaré’s symbol, the rainbow, arguably queerer than the rainbow flag of the LGBT movement, so as to revise the use of the archive metaphor and its historical complicity with the maritime.

I draw on established Afro-Brazilian writers (Carolina Maria de Jesus, Conceição Evaristo, Ana Maria Gonçalves, among others), all of whom have engaged with Oxumaré’s symbol in order to write about and remember pasts of slavery and poverty, but also to discern where their hopes and desires for the future may lead.  In their stories, attempts to walk under the rainbow are akin to small exercises in hope(lessness). To chase the rainbow is to be forever in the middle of an impossible journey. This chase could be described as a disruptive journey to “somewhere free of the signs for the body” (Dianne Brand, 2001), since it requires the chaser to be willing to literally lose her body as she knows it, to open it up to new (sexual, gendered) possibilities other than arriving at the other side.

Similarly, the rainbow, as an unreachable arc presiding over ambiguous, hybrid and conflicting sites of identification and memory making, demands that literary critics, historians, film scholars and artists fully engage with the possibility of failing to produce the memory that the rainbow incites.

It is from this improbable, indeed impossible, location that I aim to develop a framework for claiming under-theorised memory sites of the Brown Atlantic beyond forms of spatially bounded memory. The rainbow, and the Brazilian saying linked to it, constitute the conceptual centre of this study, bringing forth an understanding of the past as an improbable threshold that cannot be crossed but only precariously pursued.

Welcome to the Exeter Language and Culture Blog

We are thrilled to inaugurate this new blog, hosted by the Department of Modern Languages at the University of Exeter. We will be posting here about issues relating to and arising from our activities in teaching, scholarship, research and the promotion of language learning.