Kenya: home to diverse cultures, incredible wildlife and some of the most amazing landscapes on earth. In our field-course fortnight, we’ll be getting a glimpse of the realities of wildlife conservation here, from the challenges to the opportunities. Safe to say, as we landed in Nairobi, we were feeling pretty buzzed up.

The following morning, I awoke to the thunder of Nav jumping from the top bunk just after dawn. He hadn’t slept well. In the night, he’d been hit by a severe downpour of geckos, some six in total (seemingly leaping from the thatched roof like lemmings onto his mossie net).

The air was alive with birdsong; it sounded so strange and unusual: like hearing things again for the very first time. To see the faces behind the music, I ambled out after Nav. At first, we couldn’t see anything, but then slowly got the hang of it. And Kenya’s birdlife is amazing, from the aptly-named Superb starling, whose iridescence puts the European kingfisher to shame, to the hadida ibis, whose scream sounds like a seriously upset baby. 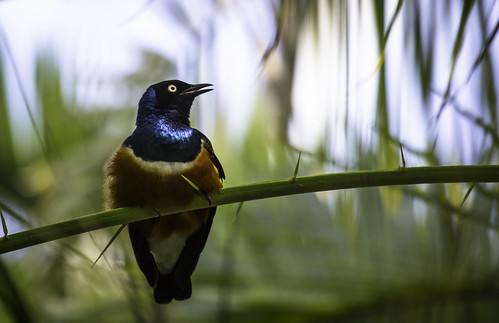 After a cracking breakfast, Dave Hodgson introduced us to Nickson Parmisa. For over thirty years, Nickson has been chief of the Masaai community here in Kitengela. The Masaai are a pastoralist tribe whose lives and customs are infamously and inextricably linked to the cattle they herd. It is not an easy life: to find fresh pasture for their cattle to graze, Nickson told us that the Masaai will walk many hundreds of kilometres, even crossing into Tanzania. And if the rains don’t come, they will walk them all the way home.

To see the landscape first-hand and tell us more, Nickson took us on a walk out of camp and up a nearby hill. ‘From here, you can see Nairobi National Park.’ Nickson points to an expanse of rich green spread out before us. ‘And,’ gesturing around us ‘these are our community lands’. Founded in 1946, Nairobi National Park is Kenya’s first. It formed when the city was small but since then, Nairobi has just kept on growing. Nowhere else can you see African wildlife so close to a crowded city skyline. In fact, to the frustration of many, development has encroached onto the park itself. First, an oil pipeline. Second, electricity pylons and most recently, phase 1 and 2 of a high-speed railway which cuts right across Kenya, splitting the park in two. Despite these changes, the park remains full of wildlife and highly important for conservation, with 99 rhinos, many of which are the critically endangered black rhino. Moreover, following two poaching incidents (1 in 2012 and 1 in 2014), a crackdown involving 9 rangers posted around its borders (since the park is unfenced to allow the free-flow of wildlife) is working. Indeed, with the help of Nickson’s laser eyesight, we saw two black rhinos and one white, as well as many Olive baboons and an eland (plus many many birds and interesting plants).

Olive baboons: one of the largest of the baboons, intelligent and opportunistic (Photo credit: Navin On)

Surprisingly hard to spot when behind some shrubbery, we saw over 10 giraffe in this walk (Photo credit: Navin On)

Later that day, back at camp, we received an inspirational talk from Paul who has worked for the Kenya Wildlife Service (KWS) for over 30 years. He spoke about his childhood, perched on the banks of Lake Nakuru and marvelling at the sight of over 5 million flamingos wading for food. With silting of the lake due to deforestation and so increased soil erosion, such sights are gone. Today, the flamingos gather in hundreds not millions. But they inspired his love for conservation, a passion which has not faltered since. And so, after finishing his studies, he went to apply for a job in wildlife. The interviewer asked ‘So? You want to work in wildlife? Have you ever been chased by a rhino?’ ‘No sir, I have not’ ‘Well, my advice to you is to go and get chased by a rhino. Then, if you still want to work in wildlife, come back.’

Paul has since been chased by a plethora of rhino in his career with the Kenya Wildlife Service. Working at the forefront of community engagement, one of his main challenges has been resolving human-wildlife conflict. It is sadly not uncommon, in an unfenced area or late at night, for a big predator to take cattle or even human life. Thinking about these issues, a Kenyan teenager discovered that flashing lights, attached to the cattle enclosures (called ‘bomas’,) scare lions so much they won’t make the kill. Such lights, since dubbed ‘lion lights’ cost $250 each, or the value of a goat at market, and appear effective into the long-term. To make these more widespread, NGO’s are working hard to distribute them.

Nickson Parmisa shows us his cattle. These are a mixed breed identified for being hardy if the rains are unpredictable: highly useful given the temperamental rainfall here (Photo credit: Katie MacKenzie)

However, not everything can be stopped with ‘lion lights.’ Eland will still force down a fence and other predators may not be so deterred. As such, compensation for loss is also necessary. Introduced in 2004, compensation schemes set out to reimburse pastoralists for all damage caused by wildlife, from human and livestock deaths to damaged fencing and even snakebites. Unfortunately, government funds have since been unable to meet the demands (some $11bn in total). Only claims related to human deaths are therefore being processed so far.

Nonetheless, Paul is optimistic for the future and emphatic about how much we need nature, for everything we do and for our hearts and minds. ‘In 2008, Kenya was in a political crisis after a highly divisive election. That week, KWS let visitors enter the parks for free. And they poured in. I strongly believe that seeing wildlife, and our connection to nature, helped heal these people in a violent time.’

The close of his talk was met with resounding applause and really insightful questions. The answer to one of these shows Paul’s passion in a nutshell.

‘If you could sum up conservation in one word, what would that one word be?’
Paul smiled, thought for a moment, and then replied ‘Life’.