Can social media drive a new wave of feminism?

I believe that social media has made the new wave of feminism becomes possible now, as it facilitates the growth of women’s connection and empowerment. For individuals, developing awareness is important. Perception of people influence their intention and even actions. When individuals all realise that they need to fight for equality in the society, they will become a strong group that sparing no efforts to improve women’s social status. A lot of youngers have realised that they are of no difference to men. This motivates girls and women to pursue the life that they want.

The power of social media in driving social movement

We all know that the media environment has been evolving, while social media have become popular communication tool since early 2000s when Facebook was launched (Broadbandsearch.com, 2020). I am interested to argue that #MeToo social movement plays an important role to improve women’s awareness about gender equality. Of course, women’s social status might still be an issue, especially in the countries and regions where women are still considered less valuable than men. 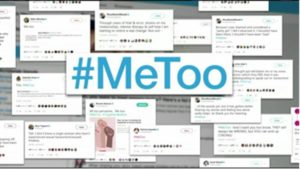 With social media, people now have the opportunity to generate and publish information to the public as social media has the feature of user generated content (UGC) (Luca, 2015). The creation of #MeToo movement was initially just personal sharing, which it attracted attention of women and men who share the feelings that women need to voice up and get united to seek equal rights for women. The #MeToo movement was started by a sexual assault survivor and activist named Tarana Burke but it did not attract much attention in the beginning. After actress Alyssa Milano twitted about #MeToo, this hashtag went viral and got 6.5 million tweets in 3 months (Chou, 2018). The success of this social media movement lies in its viral effects. Information can be circulated virally in the social media communities, which makes information spread within minutes.

What is the power of social media community?

An extended community is created when people share their opinions using #MeToo (Manikonda et al., 2018). People grow their intention to use social media to share useful information that help women. The power of this hashtag was elevated when the scale of followers and users is large on social media (Leopold et al., 2019). Women who suffer from inequal treatment and sexual harassment are given a space to express, which is a relief of people. More importantly, this empowers women to enhance their awareness about the importance of gender equality. Gender is a concept constructed through cultural and social means (Zimmerman and West, 1987).

Anonymity is an important principle on social media, which drives honest sharing of women about their experience (Elbagir, 2020). Clark-Parsons (2019) brings up that networked feminists emerge after #MeToo. Feminist activities have been organised for women to pursue gender equality, as it is still a general issue recognised (West and Fenstermaker, 2016). The development of social media provides a new platform for feminists to share their opinions and help women to seek their equal rights. Before the introduction and availability of social media, people can only have access to news through TV or newspaper. As these media are controlled by either governments or private owners, individuals have no access to authentic information of individuals. What is worse, people’s opinions are not heard on these news networks.

UGC allows individuals to share their comments and feedbacks, especially because of its interactive function. Individuals are not only audience of news content, but they have become owners of media. Authenticity and trustworthiness of social media are perceived high. Feminism becomes popular following the social movement of #MeToo, since some critical principles about gender equality are circulated and reinforced on social media (De Benedictis et al., 2019). Neoliberal feminism also grows, which is a trend for  powerful women to discuss about gender equality as they find it morally worthy (Ghadery, 2019).

Following the influence of #MeToo social movement, there have been changes in legal system in the US to protect the benefits of women (Tippett, 2018). This example suggests that social movement like #MeToo contributes to changes in the society. Law protects people in the society, while law is not of no bias. This is evidence to show that #MeToo has the capacity to make law makers think of optimising the legal regulations to better adapt to the changing world and changing needs of women. Seeing that there is improvement made for women to improve their situation is very inspiring and encouraging.

Chou S (2018) Millions say #MeToo. But not everyone is heard equally.

Clark-Parsons R (2019) “I see you, I believe you, I stand with you”:# MeToo and the performance of networked feminist visibility. Feminist Media Studies. 1-19.

Leopold J, Lambert JR, Ogunyomi IO, et al. (2019) The hashtag heard round the world: how# MeToo did what laws did not. Equality, Diversity and Inclusion: An International Journal.