An Unforgettable Year at the College of William and Mary, USA

3rd Year student Arran studied at The College of William and Mary in America this year. He had some incredible experiences that he would like to share – including meeting Barack Obama! Here’s what he had to tell us… 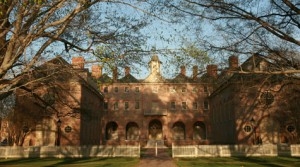 I studied at the College of William and Mary Virginia, USA. I chose it mainly based on academic expectations – William and Mary is really highly regarded in the US and I found that to be pretty well matched by reality. They give you a lot of work but the lecturers are generally fantastic and you learn a ton.

Being an economics student I did a lot of higher-level modules in econometrics – not a lot of universities offer these modules to undergraduates, so if someone is looking to really develop their quantitative skills in economics then I’d really recommend it. I also took some mathematics and some finance classes in the Miller Business School, the final finance class in Equity Markets was great and part of the grade was based on how well we managed a portfolio of investments.

I had a fantastic year so I’m not sure I have any regrets about not preparing enough.

Accommodation was provided by the college to all the international exchange students, it was pretty nice in general but be prepared to have a roommate, single rooms in college in America are very rare. Fortunately the college is pretty open to you moving between rooms throughout the year so you can move in with friends you find there, or you can move into fraternity housing if you decide to join Greek life, some of the original Greek organisations started at the College of William and Mary so you might want to consider getting involved there!

I travelled mainly up the east coast, I spent Thanksgiving in Philadelphia with a friend who took me back for the break. If you haven’t had any experience of it before the Thanksgiving holiday is at the beginning of November so it’s a perfect small break just before you go back to classes for final exams. If you can find someone who’s willing to bring you home with them definitely do it, I found it was one of my best experiences of America, the big turkey dinner, the football game and just meeting Americans outside of college all makes a great holiday.

Unfortunately not, I studied exclusively for my degree in economics.

At the college I joined the debating team, campaigned for Obama’s re-election and became an Organising Fellow (responsible for organising days of campaigning), tutored at a middle school and joined the Amnesty international team.

Have you been inspired to study in America? First years – don’t forget to start researching countries and fill in the Host Country Form on ELE asap (deadline 12th July!)
If you want any more advice about studying in America, contact us at .