Congratulations, I assume that in reading this, you are interested in studying in Barcelona. Wise move. Do it.

“I flew from Stansted to El Prat de Llobregat Airport, the main Barcelona airport which will be called Barcelona on airline bookings. To get to the city centre I would recommend taking the Aerobus. This bus goes from all terminals to Plaza Espana, Plaza Catalunya and a couple of other stops in between, and takes about 30 minutes. Alternatively a taxi takes about 25 mins or there is both a public bus and a train which stops at Estacio Sants, Plaza Catalunya and Clot Arago.

The two airports Ryanair flies to are Girona and Reus. These are about 1 hour 15 minutes from the city centre and the bus costs about €15 so take this into account when working out which flights will be cheapest.” – Jack A

The university run a welcome week for Erasmus students, which I’m told is really good, I was doing an internship at the time, so couldn’t make it. However with city tours, tapas crawls and general orienteering programs it is a really good way to meet people and settle in quickly. With regard to accommodation, there are two options:

“If you’re going to find accommodation when you get there, try to book a hostel near the centre of the city but not around La Rambla as these are likely to be more expensive and apart from some sightseeing this will not be where you spend most of your time. I tried to sort out a flat as quickly as possible but if you wait until university starts then you can probably live with your friends. From the experiences of some of my friends this is more hassle and turns out to be more expensive. I rented a room in a shared flat on Carrer Marina which was about 15 mins walk from the University, 20 mins from the beach and 15 mins from city centre. Most people lived here or around Gracia. I would recommend anywhere except El Raval. A friend of mine lived there and a normal walk home involved getting hassled by drug dealers and prostitutes.

I found the best way to contact landlords is by text, this way you will be able to understand and you have the directions. Use Loquo or ebay.es (the section is called inmobiliaria). On these sites you can either post an advert saying you are looking for a room in a shared flat or you can apply to adverts.” – Jack A. 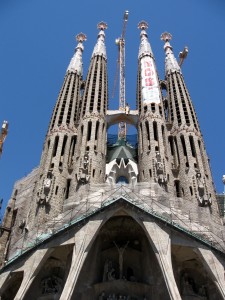 “Barcelona offers something for everyone. I picked up a brilliant book in Waterstones called ‘Le Cool: A Weird and Wonderful Guide to Barcelona’ which basically tells you about tiny secret bars and quirky things to do etc. It is written for students, and even recommends the uni library as a place of calm in the middle of the busy city!

The city is split into districts or barrios. Barrio Gotico is the most charming, comprising of tiny bars, restaurants and quirky shops all set along a maze of tiny streets and alley ways. The rest of Barcelona is designed in a block format, with long straight roads. The central areas for shopping lie along the Pg De Gracia, leading away from the Plaza Catalunya, and the Carrer de Angel, running parallel to La Rambla. Here you can find all the major Spanish high street shops. What is great about Spain, and Barcelona however is the abundance of privately owned shops. Unlike England, not every Spanish high street is identical!” – Michael T.

“As a business or economics student you will be based at the Ciutadella campus by the old Olympic village. The university has 3 official languages (English, Spanish and Catalan). You can take modules in any of these languages and most modules are done in both English and Spanish. If this is the case then assuming it’s OK with the lecturer you can normally do the classes in Spanish but sit the exam in English.

I found the Economics courses to be much more maths-based than at Exeter, this meant that I struggled a bit with these modules. I therefore stuck more to business based modules which was more fun and meant I got better marks. The system in Spain means that you get a lot more contact hours than in England but you also get more work outside of it as well (which makes no sense!). Class participation normally counts towards your mark as well (so don’t think you can just sack off the lectures). If you want to take Spanish classes you will need to act fast. Classes are hugely oversubscribed and so you will need to sign up for them first thing on the first day (when you have the welcome meeting).” –  Jack A.

“When choosing modules you have 2 weeks to sample classes before committing. However, once the course fills you will not be permitted to take it. This happened to me in my first term, and I wasn’t allowed to take 3 of my preferred modules. What happens in reality is that students sign up to literally tens of courses, they sample them and follow only the ones that interest them. So play the game – sign up early and don’t lose out.” – Michael T.

“The university also has a range of sports teams which actively encourage ERASMUS students to join. I played for the university football team which was great fun and we went to the national finals in Madrid which was a great experience. It is also a way to meet more locals. I had a friend who played handball for the first time and really enjoyed it.” – Jack A. 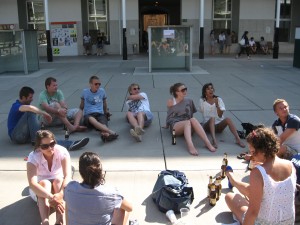 “Getting by in Barcelona city is easy as it is such a global city. However in the classroom this is not the case. I would advise taking a mix of English and Spanish language modules, as at the end of the day you have to pass and the Spanish lecturers aren’t very understanding or accommodating; don’t ask them to speak slower! What is essential is that you really make an effort to improve you language skills, and in time you will become used to the speed of lectures. If you are worried then speak with the lecturer – it is occasionally possible for Erasmus students to take extra coursework or do a presentation to replace a part of the exam.” – Michael T.

“The language centre is based in a campus on La Rambla the most famous street in the city, so if you wish to take Spanish courses these will be based on a separate campus to the business and economics modules.” – Michael T.

“Public transport in Barcelona is very good (bus/bicycle/tram/metro). The metro is quick, clean and much cheaper than the tube! You can buy termly passes that are also valid on buses and trams. When going out at night in Barcelona taxis are essential (the metro closes at 12pm). Taxis are not expensive and it will never take more than a couple of minutes to find one wherever you are in Barcelona – there’s no need to pre-book. NB: make sure you watch the route your driver takes. Taxi drivers have a tendency to take the longest route possible to squeeze the money out of you. If you speak Spanish though this shouldn’t be an issue, it’s more a trick played on naïve tourists.

National travel in Spain is reasonable. I really recommend you take the opportunity to travel throughout Spain, the Costa Brava is beautiful, but further afield don’t miss Valencia, Madrid, Salamanca, Toledo… Lisbon is great as well.” – Michael T.

“On weekdays and Saturdays the metro starts again at 5am so this is the best way to get home from nights out (just don’t fall asleep or you end up in the suburbs. The city also runs a bike hire system called Bicing (like Boris bikes in London but 10 times better). This is pretty cheap for a year and runs to the same timetable as the metro.” – Jack A 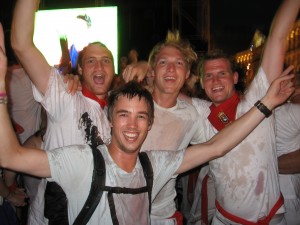 The nightlife is vast in Barcelona; quite simply you will never grace every venue! That said here is a rundown of my favourite places:

“Barcelona has great nightlife and a range of different activities. There are different things for everyone from touristy clubs down by the beach to underground reggae parties. The bigger clubs are expensive and drinks range from about €8 to €16. Entry is normally about €15 with a drink. Therefore the key to a good (and not too expensive) night out is to pre-lash (or pre-game as everyone else will call it). This can be difficult as most people will live in shared flats. Drinking on the street is illegal in Barcelona and can be punished by some hefty fines. Another fun, cheap way to get drunk is to go to chupiterias. These are shot bars and the best I visited was Espitchuputos (http://www.espitchupitos.com/) on Carrer Aribau.” – Jack A.

I would recommend opening a Spanish bank account, for ease and so you don’t face bank charges for using your card abroad. Also most landlords will want to be paid from a domestic account. I used Banc Sabadell and had no problems; Caixa Cataluna however is the choice of most students.

Things you must do! 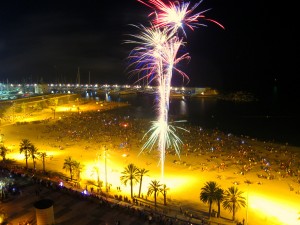 “Get involved in everything, go out as much as possible to as many different places as possible and find which places you like the most. Don’t work too hard, it’s a year abroad you are meant to be experiencing the place not spend all your time in the library. Travel around Spain if you get the chance, it is a beautiful country with loads of things to do, and I would recommend trying to go to festivals because these are generally people’s favourite memories – I went to San Fermin in Pamplona and it was probably my favourite 3 days in Spain, Las Fallas in Valencia is another fantastic experience.

Overall it is a great university, it’s a social environment, and the lecturers normally speak both Spanish and English and are really helpful. Despite all this the best thing about the uni is that they sell beer for 80 cents each and as such some of my best memories are sitting in the courtyard at the uni, in the sun with my mates and a few beers in between lectures. Don’t take life too seriously and you will really enjoy your time at the uni.

For more information on Barcelona or other partner institutions, message us via our Facebook page: https://www.facebook.com/UEBSstudyabroad