Looking back on semester one 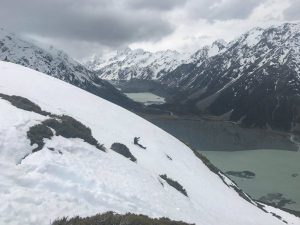 My first semester has come to an end, and what a time it has been! I’ve made absolutely incredible friends, most of whom are headed back home to whichever random corner of the world they hail from. The Brits and most of my kiwi pals are sticking around for another semester, but for most of my international friends this will be the last time I see them for a good while. I have invitations to stay with friends in a bunch of countries, and similarly a lot of people seem very keen for some free accommodation and a tour guide in London.

It sounds so cliché, but the term has flown by ridiculously fast. Even the exam period seemed to be over before it begun. I think a big part of that was how nice the study facilities are on campus, and the sun being out almost every day. As is the norm in Dunedin, lots of our furniture lived outside for the last few weeks of the semester, allowing for very chilled study in the sun. Then, whenever I needed to crank it up, there are a couple of great modern study centres dotted around the student area that make revision feel a lot less chorish. 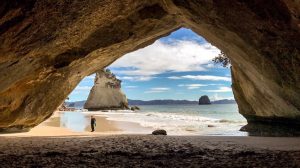 Aside from the recent finals, we had mid-semester tests in August, after which Otago was generous enough to give us a mid-semester break (half term equivalent). I spent this road-tripping around the north island, sleeping out of the car to avoid expense. The trip was incredible, and we were able to see so much in only nine days, bumping into Otago students at odd points along the way, recognisable by their exotic accents and Patagonia raincoats. We managed to hike up mount doom (the Tongariro Alpine crossing), explore glow worm caves, go canyoning, swim in volcanic hot pools and a whole lot more. 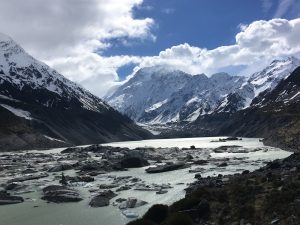 Throughout the semester there have been countless opportunities to go on trips and see some of the scenery around the south island. I joined the tramping (hiking) club as and the ski club at the beginning of the semester, both of which run regular outings, and I have been on a few.

In addition to those organised trips, I own a second hand car that I share with a handful of other internationals. I would estimate that well over half of internationals have bought cars, generally in groups. Because of this, there is a well-established market whereby students leaving the country sell their cars to inbound students, and there are an abundance of options, depending on your budget. I know of a few cars purchased at minimal expense that have since died on their owners. Not an ideal situation if you happen to be in the middle of nowhere, which turns out to be a lot of the country, but ours is still going strong.

The car has enabled hiking trips on weekends when I’m not skiing or bogged down with work, and has saved the trouble of having to rent a car whenever I want to get out of Dunedin. I would absolutely recommend to anyone coming to New Zealand or somewhere similar, especially as the sort of car you’d be buying probably won’t depreciate in value over the year or with the miles you add.

In terms of home sickness and other issues, my only struggles havebeen student finance, which whom I was fighting a losing battle for nearly 3 months, and a handful of other hiccups. I had organised for my student finance payments to be adjusted so they arrive in line with the New Zealand semester dates (June-Nov, Feb-May). But it took me until mid-September to finally get the money through due to incorrect forms being attached to my account, and being told wrong information by several different SFE staff. Resolving my issue probably wouldn’t have been that hard if it weren’t for international phone call charges and the fact that I was posting from the other side of the world. As it happened, the whole ordeal was very drawn out, and far more stressful than it needed to be.

My quest to land an internship for the summer when I return to the UK has been a particularly tough one. Naturally, I am unable to attend assessment centres, which loads of the internships I’m interested in require, but I’m persevering and will see how things go. I can’t really complain though as I am writing this on a plane to Sydney where I’ve got a 5 week internship that will keep me busy until Christmas. After that I’ll be ticking a beach Christmas off my bucket list, seeing the Great Barrier Reef while it is still alive and joining the barmy army for the final Ashes test in Sydney. Not a bad few months ahead of me. 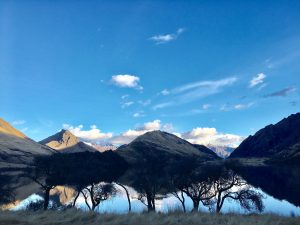