The discussion was led by a diverse panel made up of individuals of different ages, backgrounds, and representing different sectors. It presented a wide range of perspectives on the implications of the climate emergency and the most viable ways to curb human caused climate change. The panel included young activist and Student Climate Network representative Sam Sleeman, Exeter councillor Diana Moore, representatives of local environmental groups, and a range of experts of different fields from the University of Exeter. The audience was also encouraged to participate by posing questions to the panel and taking part in a poll on the most pressing issues relating to the climate emergency, so the local community was also given a substantial voice throughout the event. The result was a range of thought provoking suggestions on the social, political, and fiscal initiatives that could be used to tackle our carbon dependence, and interesting considerations of the strengths as well as the shortcomings of the different initiatives. 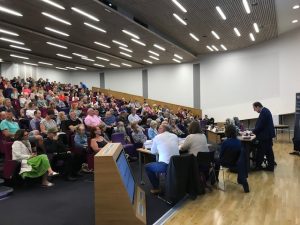 Surprisingly, few of the ideas posed by the panellists focused on the changes that could be made by individuals, and instead the focus was on citizens organising into groups to effect change through political means. Dr Alice Moseley proposed that citizens’ assemblies on climate change should be established, acknowledging that it would take time for them to take effect, but still stressing their importance for long term environmental policy making. Sam Sleeman also proposed youth assemblies to give the younger generation a stronger voice when it comes to environmental policies that are being implemented. Addressing a room of some four hundred people in Exeter and more people watching the livestream in Penryn, who all chose to spend their evening at the event, the idea of citizens’ assemblies on climate change certainly held much promise, and was backed by the audience poll which showed that the vast majority in the room supported their formation. Throughout the event, the importance of allowing local governments more power to make environmentally friendly decisions was also stressed, with particular focus on its very local application; how this could influence the building of better insulated homes in Exeter. There was clear expectation that governments should do more, locally as well as nationally, to act on the climate emergency, with the help and pressure from their citizens. 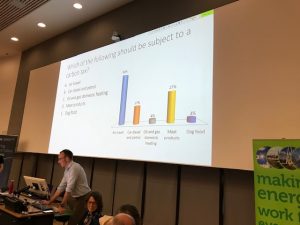