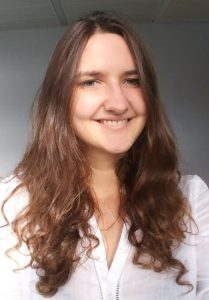 When the group of us entered the Kaleider studios on a Monday morning, having barely covered the welcome lectures and just about able to remember everyone’s faces, we had little idea of what to expect from the residential. It was all still new, still somewhat daunting, but also exciting.

We were welcomed with free coffee – a smart trick to get at least the caffeine addicts in a good mood from the start.

With a group of blinking, wide-eyed students entering our habitat for the next three days, we began with introductions, as well as presentations from companies who were keen to work with us. Which was reassuring – it may be quite nice to be potentially employable.

With lifted spirits about our future careers, we got on with lectures and tasks that made up the residential. The parts I enjoyed most were interactive practical activities, which helped us to visualise new and complex ideas in ways we haven’t before – it was quite inspiring to feel your old understanding of the world tear apart as you learn to see the world in new ways. These tasks have planted seeds of new ideas which will probably influence the way I think for a long time.

I appreciated having been able to get to know others on the course throughout the residential. We worked in teams or pairs on most tasks, and so it was nearly impossible not to have spoken to mostly everyone. Not only spoken, we were pushed into a circle and forced to shake hands with everyone – quite literally. It’s not a scary as it sounds though, even the most introverted of us seemed a lot livelier afterwards. And – we knew everyone’s names by the end – something that I have not experienced during undergraduate studies (when 300 people in a lecture hall meant only speaking to the two people you met on the first day. So, this was a nice change).

Perhaps it was the amount of information that was blasted through our minds, or maybe just a summer without assignments having crippled our educational fitness, but the three days at the Kaleider studios were shattering. However, we have witnessed the excitement of the faculty and the external partners about our course, which made it hard not to get infected with the excitement. We were also given useful information to be ready for the course ahead. So, if not for anything else, the residential was useful as a memorable introduction to what awaits us, providing us with a frame of mind that I believe will benefit us throughout our studies. 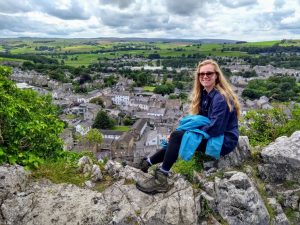 Our week started as all good weeks should, with strong coffee. We were welcomed into the Kaleider Studio and settled in straight away to our jam-packed week of workshops, lectures and networking.

The residential covered a broad range of topics from how to define the Technosphere to looking at the implications of a new geological epoch. The studio was an excellent working environment and gave us the opportunity to branch out away from campus.

Our first afternoon was the chance to meet potential companies to complete our internship with. A unique aspect of the MSc Global Sustainability Solutions programme is the dissertation. Instead of completing an academic dissertation we are given the option of turning this into an internship with an external partner. During the afternoon we heard pitches from companies about their current sustainability issues and research options we could collaborate with them on.

For example, the Devon County Council representative was keen to find out what the barriers are to recycling and potential options for how they could be improved. The scope of the company’s pitches were wide ranging and offered a broad selection of topics from construction to sailing. We were then let loose to network with the partners and discuss potential internships for the Summer.

Day two’s focus was on ways we can discuss and teach climate change. We were introduced to the dialogic approach and the bicycle model for climate change education at school. We were shown the importance of co-production and how the effect on everyone needs to be incorporated into the method used. The afternoon was an introduction to systems thinking, showcased through a series of games and practical activities. The day concluded with a session on how to make changes by choosing the appropriate entry point. We were shown the importance of language, humour and conveying a positive message.

The final day gave us the opportunity to build on our understanding so far and start thinking about our group work to come. The morning’s topic was prosocial behaviour followed by an exercise looking at how we wanted the future to look vs how to get there.

These three days were the perfect opportunity to delve into the course content in an engaging but relaxed format. We had the opportunity to learn from people with a diverse range of backgrounds and saw how we could fit into the bigger picture of global sustainability.

By Daneen Cowling and Tom Powell 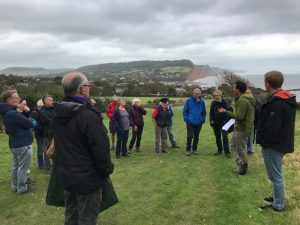 A week in advance of Earth Science week, Devon saw the arrival of the annual celebration for science in the seaside town of Sidmouth. The event hosts various engagement and educational activities across the spectrum of science, utilising the Sidmouth landscape as creative learning spaces. The Sidmouth Science Festival ran between 4th-13th October 2019.

This year scientists from the Global Systems Institute at the University of Exeter had the opportunity to lead a Deep Time Walk through the wooded paths across Sidmouth’s red cliffs. Dr Tom Powell, who specialises in how humanity interacts with the Earth system and Research Masters student Daneen Cowling specialising in deep time coastal carbonate weathering, together led a bespoke Sidmouth Deep Time Walk. Content was inspired by experiences on Deep Time Walks led by Dr Stephan Harding, and interactive storytelling on the Deep Time Walk App. Tom and Daneen were also able to inject their own knowledge into the conversations along the walk, as well as incorporating Sidmouth and Devon natural history to the walk.

Science was not the only input, creativity and engagement with science and the natural environment was also culminated from consultations with Anne-Marie Culhane. Using her experiences from her own innovations for Earth Walking and other events, we were able to cultivate an immersive activity educational and engaging.

Meeting outside the Sidmouth Museum, we were greeted by a large group of enthusiastic walkers. Introducing the GSI and ourselves, we then explained the creative and scientific thought journey behind the walk story and route. Setting off towards the cliff we paused moments later to discuss the formation of the solar system. Starting from the absolute beginning, 4.5 billion years ago. Pushing on towards the coast we immersed in the chaotic birth and building of the foundation of our planet and its orbiting moon. 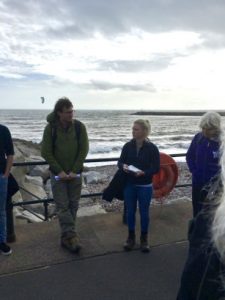 Wet and windy, fitting as we talk about the chaotic start to Earth’s existence

We then transgress the molten rock world to a chemically interesting and active planet. One by which the environment controls how life can soon arrive, adapt and evolve. As we gained elevation we also gained in the exciting stories and revolutions that Earth has witnessed through its history. From the arrival of life, the creation and crusting Earth surface, and the many episodes of climate extremes such as the several episodes of Snowball Earth – an ice enclosed Earth onset by runaway feedbacks, escaped by CO2 buildup from volcanism.

Further into the woodland trails, sheltered by the wealth of vegetation blanketing the floor and sheltering us from the encroaching rain, we entered the geological periods controlled by the rapid evolutions and diversifications of life on Earth. Exploring the extensive arrivals of new species in the seas, soils and skies as we walked, punctuated by shorter walks with no stories as we symbolise the scale of rapidity these changes took force. Reaching the Triassic period we were conveniently paused on top of High Peak cliff overlooking the red desert sandstones, aiding the visualisation of how the landscape would have looked at the time, as well as the different dominant species.

Descending back to the coast we whizzed through the relatively rapid geological periods that followed the Triassic, soon to arrive at the Holocene and the arrival of man. To contribute to the understanding of speed at which humans took the reins of planetary-scale environmental influence, we gave out Deep Time Line that represent human history (20,000 years) along the scale of a 10cm ruler. From the first evidence left by humans, it was not long until we were in the thick of the industrial revolution. From species extinction, global chemistry changes, ecosystem reductions and management to the uncontrolled emittance of CO2 triggering a human-made climate change acceleration, in such a short period of Earths history we have had geological scale influence, so much so we’ve created our own epoch; The Anthropocene.

Returning back to the coast we paused to panoramically view the landscape ahead of us; rolling hills with geometric hedges and patches of woodland, punctuated by clusters of houses. With this view we asked the group to spot an area that has not, in some way, been influenced by humans. Unsurprisingly, we came to the realisation we were looking at a very “unnatural natural” landscape. Shrinking down from the global scale of humans on the environment, it was clear to even be evident locally, which raises one of the many questions: Is anything natural anymore? Land management right down to the species of trees we want to grow for timber has varying impacts, in some cases able to introduce new species and ecosystems, but at the expense of the previous and the species that once thrived. 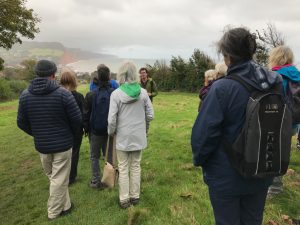 Overlooking human influence and management on the Sidmouth landscape

To finish the walk, Tom ​demonstrated ​a ‘​complex systems’ game ​introduced to us by Robin de Carteret. ​With all members of the group standing in a circle, we impose one simple rule; each person has to choose two other members of the group and remain equidistant to them at all times. This produces chaos as everyone moves to positions themselves with respect to their two chosen people, but gradually settles down as a stable arrangement emerges from the system. This brilliantly demonstrates the kinds of dynamic systems we study, in which stability can emerge as a result of dynamic interactions. We used the idea to demonstrate some of the characteristics of the Earth system by assigning a role to each member (e.g. rainforests, CO2, ice), and experimented with what happened when one or more parts of the system was perturbed by asking the people representing CO2 and rainforests to move slightly. At first this caused small ripples through the system, causing everyone to slightly adjust their position before stability was found again, but with a larger perturbation chaos ensued again, and the whole system broke down before eventually finding a new stable state. Finding this state does not happen on the same timescales for each “experiment”, as this depends on the resilience of the system and its efficiency to bounce back from perturbation, which captured the sensitivity scientists must account for in models.

The Sidmouth Science Festival was another success for engagement and educating, definitely with added enjoyment while doing so! Sidmouth will also be hosting a Clean Growth Event next February with more collaboration with the University of Exeter, so keep your eyes peeled.

To learn more about engagement and outreach opportunities with the University of Exeter Global Systems Institute, please contact:

To find out more about the organisations mentioned, please follow the links below:
Anne-Marie Culhane: Creative environmental and art projects