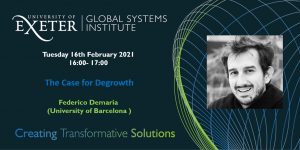 Can we live simply so others can simply live?

In this seminar, Dr Demaria explores the controversial thinking of a systems shift to degrowth, as a solution to many of the economical, societal and environmental challenges our capitalist society has produced.

Dr Demaria is an interdisciplinary socio-environmental scientist at the Institute of Environmental Science and Technology (Autonomous University of Barcelona). He works on economics of ecology, ecology of politics and human geography. Dr Demaria is the deputy coordinator of EnvJustice project that studies and contributes to the global environmental justice movement. He is also an influential critique of  ecological and cultural critique of (sustainable) development. Through his critiques he has proposed transformative alternatives to current ways of living – degrowth. Dr Demaria has explored this alternative in the book Degrowth: A Vocabulary for a New Era (with Giorgos Kallis and Giacomo D’Alisa), as well as his most recent book: The Case for Degrowth (with Giorgos Kallis, Susan Paulson, Giacomo D’Alisa).

Dr Demaria structured his seminar to the key chapters of his book. Making very clear the from the start that this proposal is meant to be controversial, Dr Demaria set the context for the current systems we operate and how they support the obsession with growth. He also outlines how growth cannot be compatible with sustainability, evidenced by the current environmental crisis we are faced with. Hence, we cannot solve everything with economic growth, and a different society is needed to prosper without growth.

Dr Demaria argued to satisfy degrowth it would be crucial to reduce the Global North consumption. Acceleration of growth has amounted to an accelerated environmental sacrifice. Adoption of western lifestyle and want to be ‘rich’ has fuelled this, driven by belief this is the only route for living.

But is degrowth even feasible? Dr Demaria addressed this by explaining how as a society, we are cooperative. The history of our society and it’s success exemplifies that. Dr Demaria elaborated on how there is a wealth of the commons, that by being in the commons, you are part of the change you want to see. This is important – because there will not be positive change unless people actually want it, and to want it we must have spaces to see the alternatives. Supporting and operating in cooperative commons would allow such a space.

Looking to the future, Dr Demaria also highlighted how, unlike proposals of circular economy and other ‘sustainable’ shifts that still prioritise growth, degrowth is the only path that stays within the 2C warmer future. Furthermore, degrowth in the global North will reduce pressure of exploitation in the global South. Important especially in the context that the most powerful limit of resources, is their use.

Dr Demaria gave an incredibly interesting talk, followed by many questions. To see the full talk and the QA, view the recording here.

Link to Book:  The Case for Degrowth

Link to recent article: The case for degrowth in a time of pandemic 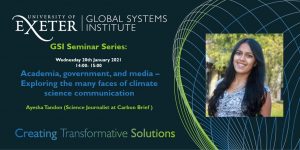 Ayesha shared her insights and reflections from experience with climate change communication from a range of lenses. Her talk was interactive, thought provoking and was a great reflection exercise for academics to assess how we conduct our own communication.

As well as climate communication at Carbon Brief, Ayesha has also had science communication experience at governmental bodies (The Met Office), and in academia during her MSci Natural Science student at Exeter.

As lead science editor for the undergraduate STEM journal at Exeter University, Ayesha describe practices in academic models of communication, familiar to her academic audience. Highlighting how the audiences of scientific papers are confined to the same academic circles the authors are within. The specialist and technical language used in these papers to communicate ideas and arguments with accuracy, make them inaccessible to those without this knowledge – even if they have the want to be engaged.

Ayesha then went on to explain how the style, format and emphasis of science communication shifts outside of academia, in the cases of the Met Office and Carbon Brief. Both parallel in assumptions their readers do not get further than the first couple paragraphs of a piece. Ayesha explained the importance of “frontloading” – ensuring all key bits you want the reader to take in and go away with – are at the very start.

Also important to these communication outlets were use of graphics to explain the statistical results. In academia there is a responsibility to communicate results precisely, but as told by Ayesha’s experience at the Met Office and Carbon Brief; numbers are not well received by government and general public audiences. Instead, infographics are more engaging and accessible.

Ayesha shared some great examples of infographics, highlighting how informative they can be without the need for the full context. One example used were the ‘Climate Stripes’ by Ed Hawkins. This visualisation has been so impactful because it’s accessible – redundant of any text or numbers, the colours are universally understood.

“[Social media] will always be useful to invest in … to gain new audiences or inform your existing audience. It’s important as scientists we communicate our research .. if you don’t take any effort to try to communicate it to a lay audience you’ve missed out on the vast majority on the population.”

Ayesha Tandon, the importance of social media for science communication

This interesting talk was followed with an array of questions – keen to learn more from Ayeshas experiences to become better science communicators to non-academic audiences.

Questions from the audience:

You can watch Ayesha’s Seminar and get her answers to the questions on the University of Exeter GSI YouTube playlist, here 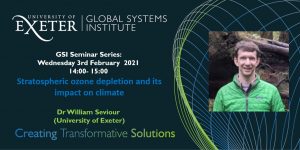 Today (03/02/2021) saw the second seminar in the GSI Spring Seminar Series of 2021. We hosted speaker Dr Will Seviour, a senior lecturer at the University of Exeter Department of Mathematics, and the GSI.

Dr Saviour is a relatively new academic at Exeter, but brings with him a wealth of experience and specialism in Ozone and large-scale Earth System dynamics from the University of Oxford, John Hopkins University and University of Bristol. Dr Seviour’s work now looks into climate and extreme weather consequences of Arctic warming, and coupled dynamics of Southern Ocean dynamics – the topic of his talk.

Dr Seviour introduced the importance of ozone and it’s role as a planetary boundary – central to a habitable Earth. Ozone was also shown to have practical importance to the success of the sustainable development goals.

However, Dr Seviour soon delved into the consequences of the current state of ozone attention, it’s depletion. Ozone Depletion Substances (ODS) e.g. CFC’s, were shown to have had a strong control on Ozone, trending with their emission and eventual regulation. They were also shown to be powerful greenhouse gases.

Dr Seviour invited the audience to an interactive quiz, to rank where ODS sit amongst other common greenhouse gases (CO2, N2O and CH4) in radiative forcing. This produced the surprising result that ODS were only second to CO2 in their forcing, accounting for a 1/3 of warming effects of CO2 since the mid 20th Century. This strength was also identifiable in warming impacts – even by simulating models with only the forcing of ODS (and not other greenhouse gases), trends in Arctic melting were still observable. The focus then shifted to the south pole; why there is more ozone depletion over Antarctica and how it’s variable with atmospheric dynamics.

The ozone situation definitely wasn’t doom and gloom, as Dr Seviour then discussed the long term ‘healing’ trends being observed and modelled. Since a reduction in CFCs from the Montreal Agreement, and an assessment every 4 years on ODS, ozone depletion has started showing signs of recovery. But when would ozone return back to 1960 levels? Dr Seviour again invited the audience to an interactive quiz, to give their best estimates of the return for global and Antarctic levels of ozone. Majority of the guesses were around the current predictions of 2060 and 2090 respectively.

Thanks to a warming climate, the recovery may be even faster due to changes in stratospheric circulation. But, true to the Earth system, these changes will not be linear. Dr Seviour explained that this would lead to a cooling Southern Ocean, which would expand sea ice around Antarctica, then shift polar jets. Yet, there would still likely be a long term warming trend – driven by upwelling.

Dr Seviour’s talk left us with a new appreciation with the importance of ozone, and it’s climate control – whether that be through it’s greenhouse gas equivalent forcing, or the atmospheric dynamics it influences.

To learn more about Dr Seviours work, you can view his publications and research projects on his personal website